Making their own path: Nevada leads country in startups in 2010 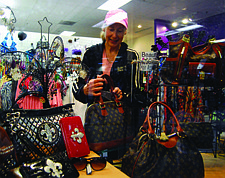 Brian Duggan/Nevada AppealSusan Shott, co-owner of Mama&#039;s Got A Brand New Bag in the Carson Mall, organizes her merchandise on Thursday.