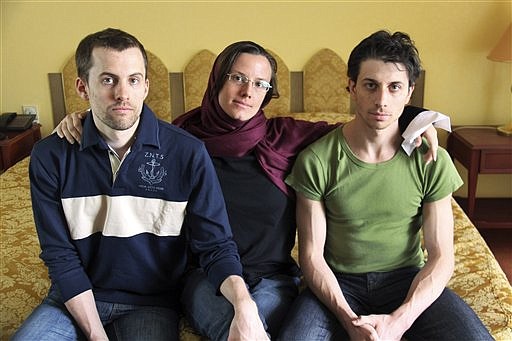 FILE - In this May 20, 2010 file photo, American hikers Shane Bauer, left, Sarah Shourd, center, and Josh Fattal, sit at the Esteghlal Hotel in Tehran, Iran. An Iranian court is holding a closed-door session Sunday Feb. 6, 2011 to begin proceedings against three Americans detained 18 months ago and accused of spying. It was unclear whether the two men were present Sunday in the Tehran Revolutionary Court, which deals with security-related charges. Authorities imposed a blanket ban for observers, including Swiss Ambassador Livia Leu Agosti who represents U.S. interests in Iran. (AP Photo/Press TV, File)