Voice of the Greenwave inducted into Hall of Fame 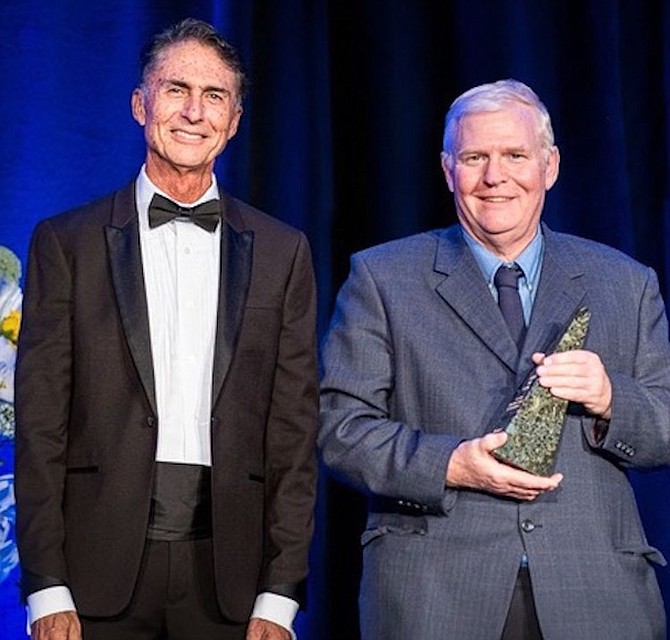 The Voice of the Greenwave was inducted into the Nevada Broadcasters Association Hall of Fame.

Larry Barker, who has called Greenwave football, basketball, baseball and softball games since the late 1980s, was honored last month in Las Vegas.

“This is a great honor for Larry. He has been a recognized voice in covering Greenwave sports since the 1987-1988 season,” said LVN Editor Emeritus Steve Ranson, who was the newspaper’s sports editor for 20 years. “Over the years, he has provided the play-by-play action for many sports, and he has had the opportunity to broadcast many state championship games.”

Ranson also sat with Barker during his calls and was impressed by his preparation.

“Over the years, Larry and I have given the Greenwave fans a good one-two punch in providing sports coverage,” Ranson said. “On occasion, I have had the opportunity to sit next to Larry during a broadcast, and I found him to be prepared and ready to turn on that mic switch to call the games.”

Barker is one of the few to document both the ups and downs of Greenwave athletics since joining the state’s largest class before dropping down to the 3A 10 years ago.

For a five-year span in the 1990s, Barker also broadcast Lowry High School athletic events on KWNA Radio before coming back to Fallon to continue calling Greenwave games. When Barker first came to Fallon, he also worked as a radio announcer until KVLV converted to automation. In his career with KVLV Radio, Larry has broadcast both home and away events, and many times, he uses his own money to fund the trips.

He has broadcast 15 state championship games, including Fallon’s basketball sweep in 2019 when the Lady Wave won its third-straight before Elijah Jackson’s game-winner in overtime to give Fallon its first crown since 50 years. Barker also called Fallon’s first two state titles when he moved back to the 3A when the baseball and softball teams won it all in 2011.

Ranson recognized that only a few radio stations in Nevada still broadcast high school sports, which makes Barker’s work in Fallon stand out even more.

“Larry will be known as one of the best high-school sportscasters of all time in the State of Nevada,” said Ranson, who added that Barker should be a lock for the NIAA Hall of Fame.

The NIAA inducted Ranson into its Hall of Fame in 2018.

Randy Beeghly, a Greenwave Hall of Famer who provides color commentary on the broadcasts, said Barker’s behind-the-scenes work is impressive.

Aside from the play-by-play calls, Barker worked to expand the audience outside of Fallon by streaming his broadcasts on Network One Sports several years ago. With people from all over the world able to tune in, Greenwave athletics could be listened to from anywhere.

“He puts in a lot of work that people don't realize: preparation for broadcast, hauling equipment, setting up the equipment for the broadcast, breaking down equipment and hauling back to his truck for every game,” Beeghly said. “I would say that adds an extra hour before the broadcast and another hour after the broadcast. He is relentless and is so passionate about broadcasting and especially broadcasting all of the Greenwave sports that he covers. Fallon is lucky to have him. Nobody is more caring and passionate about Greenwave sports.”

Larry also wrote sports articles for the Fallon Star Press and the Lahontan Valley News in the 2000s. On Saturdays in the fall, he announces home SYFL football games. The Nevada Press Association awarded Larry with two first place awards in sports reporting and sports column writing. He is involved as a member of the Greenwave Hall of Fame committee.

About the Nevada Broadcasters Association Hall of Fame

The Nevada Broadcasters Association Hall of Fame was first created with the goal to bring added respect, honor and appreciation to the employees of our radio and television stations.

The decision was made to honor employees who had worked in the broadcast industry for a minimum of twenty years. As we look back on the hundreds and hundreds of Nevada broadcasters who have already been inducted into the Hall of Fame, we realize that each person’s story is part of a written history of broadcasting.

These Hall of Famers each took different paths. They each in their own way, helped to shape Broadcasting in America. And they each shared a common passion, love, dedication and commitment. Each year we proudly continue telling the collective story of the Broadcaster.

The Hall of Fame showcases excellence in broadcasting, with each name representing a very unique talent, a special skill and a journey taken. Finally, the NBA Hall of Fame has never been a competitive award, nor has it ever been a political award.