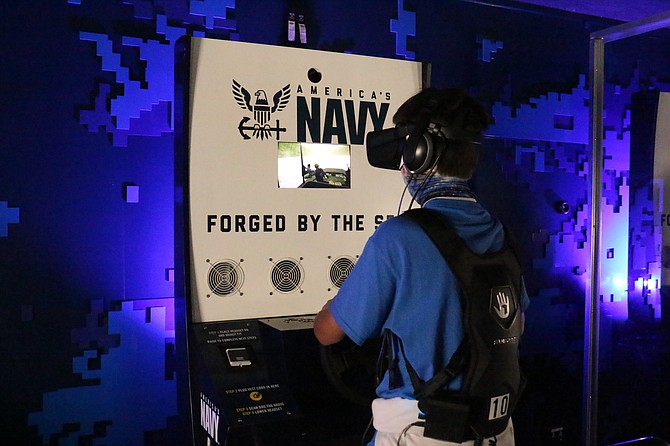 Carson High School students on Tuesday were able to use an app through the Oculus Rift headset that simulates a mission using a steering wheel and throttle system to replicate a high-speed special warfare combatant-craft to rescue Navy SEALs, the elite Sea, Air and Land teams that conduct special operations to gather intelligence or capture or eliminate targets in maritime, jungle, urban or other hazardous environments.
The Nimitz experience was provided inside a large, 18-wheeler located on Carson High’s campus outside its Shane Quilling weight room and gym with booths set up for students to sign up, learn about various fields they could enter as cadets, try their hand at pull-ups or talk to recruiters about scholarship opportunities and to enter the Nimitz virtual reality mobile station itself.
Once inside, they would strap on the Oculus headset and a SubPac wearable pack, try the simulation for a few minutes then move a debriefing station to receive feedback and a performance grade. Students also received dogtags to remember their experience.
CHS Lt. Cmdr. Dan Meyer is now in his eighth year with the school’s Junior Reserved Officer Training Course program having retired after serving in the Navy for 30 years before leading the school’s JROTC program. He said Tuesday’s event, which lasted all day on campus, was beneficial for students who might not have considered all the military has or have certain preconceived notions about it.
“A lot of the students see the Navy in a different way, I think,” he said. “We’re stuck in the middle of Nevada, so you don’t get to see a whole lot, especially for our cadets.”
For other students like Owen Hunt, now a junior, it reinforces their plans. Hunt has been in the JROTC since he was a freshman.
“My plan is, for after high school, is go into the Army,” he said. “This is more of a family thing. More than anything else, I want to serve my country and do as much as I can. We’re very big into the military bearing and just really taken it to heart my whole life.”