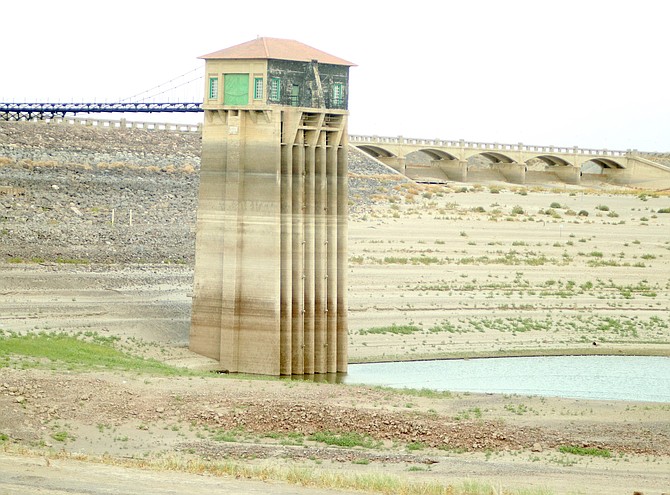 The Lahontan Reservoir is slightly above 6,000 acre-feet of water.
Photo by Steve Ranson.

To ranchers and farmers in the Lahontan Valley, water is more precious than gold in providing an agricultural lifeline to the thousands of people who call this area home.
Rusty Jardine, general manager and legal counsel for the Truckee-Carson Irrigation District in Fallon, presented an overview of the Newlands Project and how reclamation and the laws that govern its operation have made Fallon the Oasis of Nevada. Jardine presented the third lecture last week from the Churchill County Museum’s seven-part series on water.
The fourth lecture held Tuesday focused on the Derby Dam fish screens, and the fifth lecture on Oct. 12 features two speakers. Darcy Phillips, executive director of the River Wranglers, will discuss “In and Out of the Classroom: Learning About the Carson River Watershed” with information on the watershed, pollution, water quality and water conservation.
Brenda Hunt, manager of the Watershed Program for the Carson Water Subconservancy, will present “Watershed Literacy in Action: I am Carson Watershed.”
All presentations are free and open to the public beginning at 6 p.m.
TCID hired Jardine in 2010 to become general manager after he served for years as an attorney in the Elko court system and the Eleventh Judicial District Court in Pershing County where he worked more with the Humboldt Decree that regulated that body of water.
Jardine said TCID supplies only untreated water for agricultural use, and the Carson and Truckee rivers create a supply. As with the previous lecture on the origins of the Newlands Project around the turn of the 20th century, Jardine briefly gave a history of the Newlands Project and how it fits in with the communities. TCID, though, was formed in 1918 to work with the Bureau of Reclamation (former called Reclamation Service) to assume eventual control of the Newlands Project.
“Our core mission was to provide for a drainage system,” Jardine said. “The engineers who created this project were brilliant. It was a marvelous engineering feat.”
Jardine said TCID has 2,500 users and operates with a $7 million budget. Although much of the water flows to the farmers and ranchers, Jardine said TCID also uses the water to generate electricity at three power stations its owns. He said the agency learns from its history, especially when re-examining 2015, which parallels this year for water storage and usage along with drought data.
Overall, Jardine said in real terms, TCID and the reclamation projects haven’t been in existence that long. He said the number of congressional acts provided people a system to homestead and gain access to land for private ownership. Lake Tahoe, he said, reaches an average depth of 1,000 feet with its clear water. The reclamation project, therefore, provides for a series of dams to either hold or divert water, a system of canals and the Lahontan Dam holds back water that flows in the Carson River for the agriculture producers. 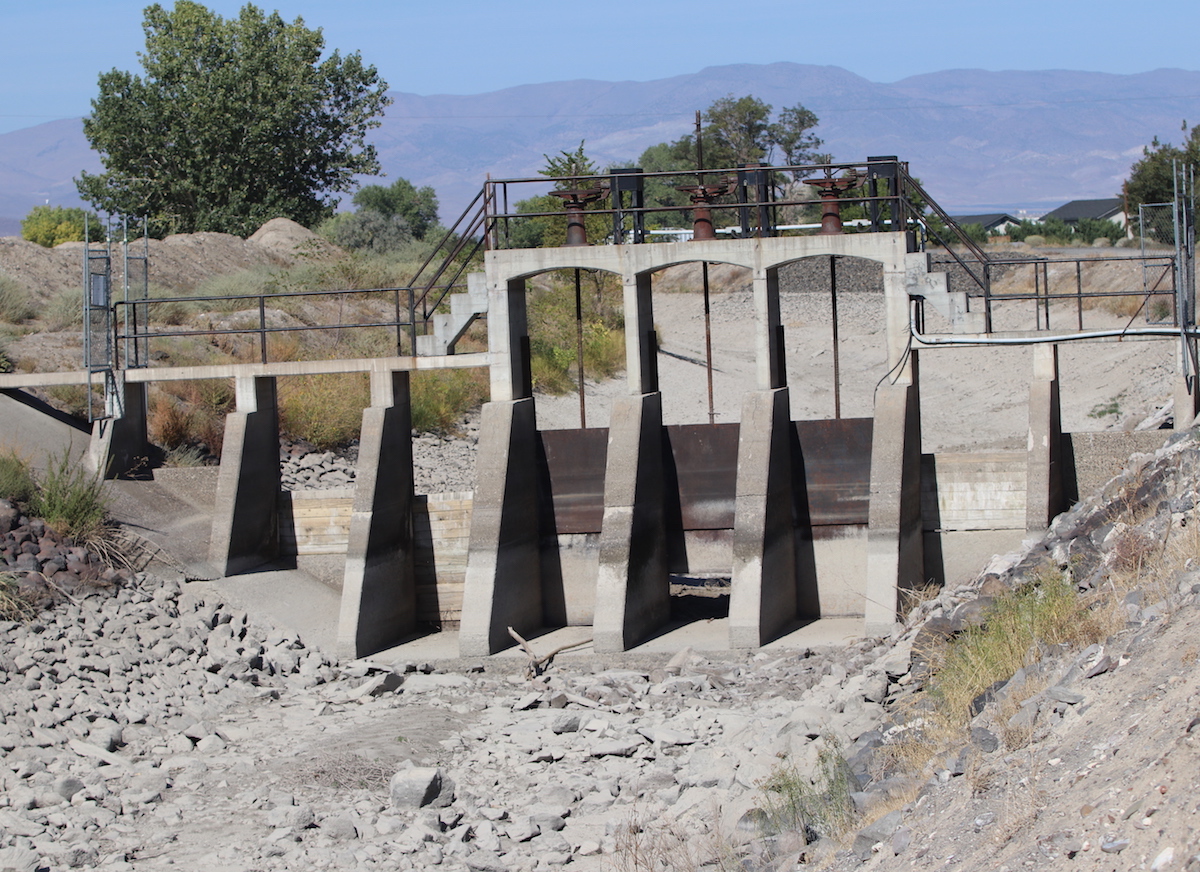 Steve Ranson/LVN
A dry Truckee Canal runs south of Fernley and normally delivers water from the Truckee River to Lahontan Reservoir.
“The folks in the 1800s saw a river and later a dam built to pool water,” Jardine said.
The plight of the project, the water runoff from the Sierra and Lahontan Reservoir storage continue to keep TCID busy. Because the snowpack fell below expectations this year, Jardine said farmers received less than 70% of their water allotment along with a shorter growing season.
“It’s so difficult to forecast,” Jardine said of the snowpack and water content.
Currently, by law, the reservoir has maintained its current level at about 6,000 acre-feet of water, but Jardine is hopeful more water may be able to flow into the reservoir from late October or early November storms. All eyes, though, are on the winter months.
“We need help. We need snowpack,” he said.
The March 1, 2021, figures showed the SNOTEL (Snow Telemetry) site near the Mount Rose summit recorded a total 68 inches of snow with 21 inches of water content. That amounts to 65% of median for the first day of March; however, the area did not receive any big storms for the next three months to improve the snowfall depth or content.
Jardine was asked to revisit the canal breach of Jan. 5, 2008, which flooded hundreds of homes in the Fernley area. A 50-foot breach in the Truckee Canal’s embankment emptied water to the housing subdivisions below the canal. Jardine said at the time water flowed at 750 cubic feet per second and inundated 590 houses. Afterward, Jardine, who was not general manager at the time, said attorneys were contacting homeowners about taking legal action against TCID and other government entities. Consequently, TCID was sued in both state and federal court.
“We had to get rid of assets … our storage at Donner Lake,” Jardine said. “We were able to settle those claims.”
The sale of the district’s Donner Lake assets satisfied litigation arising out of the Fernley flood with provisions implemented by the Truckee River Operating Agreement. TROA regulates the usage of water storage and flow in the Truckee River. The Newlands Project receives river water that is redirected at Derby Dam west of Fernley to the Truckee Canal.
Jardine said TCID is subject to the National Historical Preservation Act, and the Clean Water Act that protects the environment. By referencing Marc Reisner’s book, “Cadillac Desert,” Jardine said the information provides a history of the West’s water management. According to Jardine, Reisner wondered why anyone would relocate to an area where there's no water to build communities.
“Well, we’ve made a great place out of this community,” Jardine said, smiling. “We have land and have water.”
Jardine said Reisner was accused of defending the environmentalists; however, Jardine pointed out Brigham Young and his followers developed the desert in Utah by conquering the land and growing crops. He said the term Mesopotamia in American indicates rivers and fertile ground led to productive growing.
“Reisner said the Reclamation Act was based on the Mormon development of the desert,” Jardine said.
Congress had passed a number of bills, but Jardine said the Newlands Project ushered in the current water laws. The first comprehensive water law was passed in 1913. After that year, Jardine said water rights would become the state engineer’s responsibility. The Alpine and Orr Ditch decrees determine how the area’s local water is used.
The Carson Water Subconservancy District states the “Alpine Decree allocated the East and West Forks, and main stem of the Carson River into eight autonomous segments. Transferring water rights from one segment to another segment changes the priority of a given water right. Based on this and other restrictions in the Alpine Decree, the movement of water must be done in a systematic and careful manner.”
According to the TCID website, the “Orr Ditch Decree was the result of a legal action brought by the United States in 1913 to fully specify who owned water rights on the Truckee River and had rights to storage in Lake Tahoe. The Orr Ditch decree adjudicated water rights of the Truckee River in Nevada and established amounts, places, types of use, and priorities of the various rights, including the United States’ right to store water in Lake Tahoe for the Newlands Project.
“The decree also incorporated the 1935 Truckee River Agreement among Sierra Pacific Power Company (now Truckee Meadows Water Authority), TCID, Washoe County Water Conservation District, Department of the Interior, and certain other Truckee River water users.”
Because a Nevada State Statute determines water usage, Jardine said the people who live in the state enjoy the right to the water’s use.