Senators fight, but fall at Reno 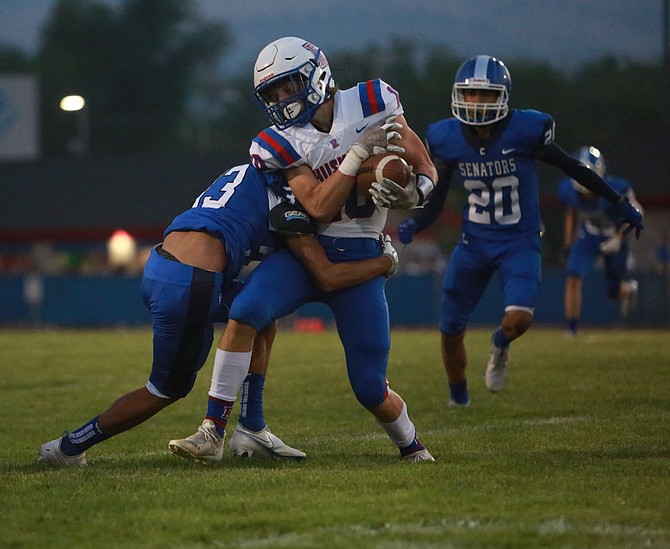 
Playing four quarters have football may have been enough for both teams heading into Friday night.
Reno High bested Carson 28-14 on its home grass, but the Senators looked vastly improved from the last time they stepped onto the Huskies home field.
After falling behind 21-0 late in the third quarter, the Senators gave everyone on the home sideline a scare by scoring 14 unanswered points.
Vinny Ferretti found Parker Story for a 33-yard gain and Ben Heaton matched his production with a 33-yard bulldozing run to the end zone.
Down 21-7 heading into the fourth quarter, the Senators forced a punt to get the ball back on offense.
Ferretti and company started the drive on their own 11, but a 76-yard completion for six from Parker Story cut the contest to one score, 21-14.
Story didn’t just reel in any average pass as Ferretti’s initial ball was intended for Jacob Campbell.
The ball deflected up in the air, found Story in stride and the 5-foot-9 wideout was off to the races.
“The was a good break. Parker was right in position. The thing with Parker, he gets the ball in the open field like that he is going to finish it,” Roman said.
Ferretti ended the night 6-of-18 passing with 106 yards.
The Senators defense was stout throughout the first half, but penalties allowed the Huskies to march down the field one more time to finish off the final touchdown with 3:36 to play.
“I was incredibly impressed with this groups resilience and toughness tonight,” said Roman. “We played a physical, good team. … We can get a lot of good takeaways. I’m excited about that.” 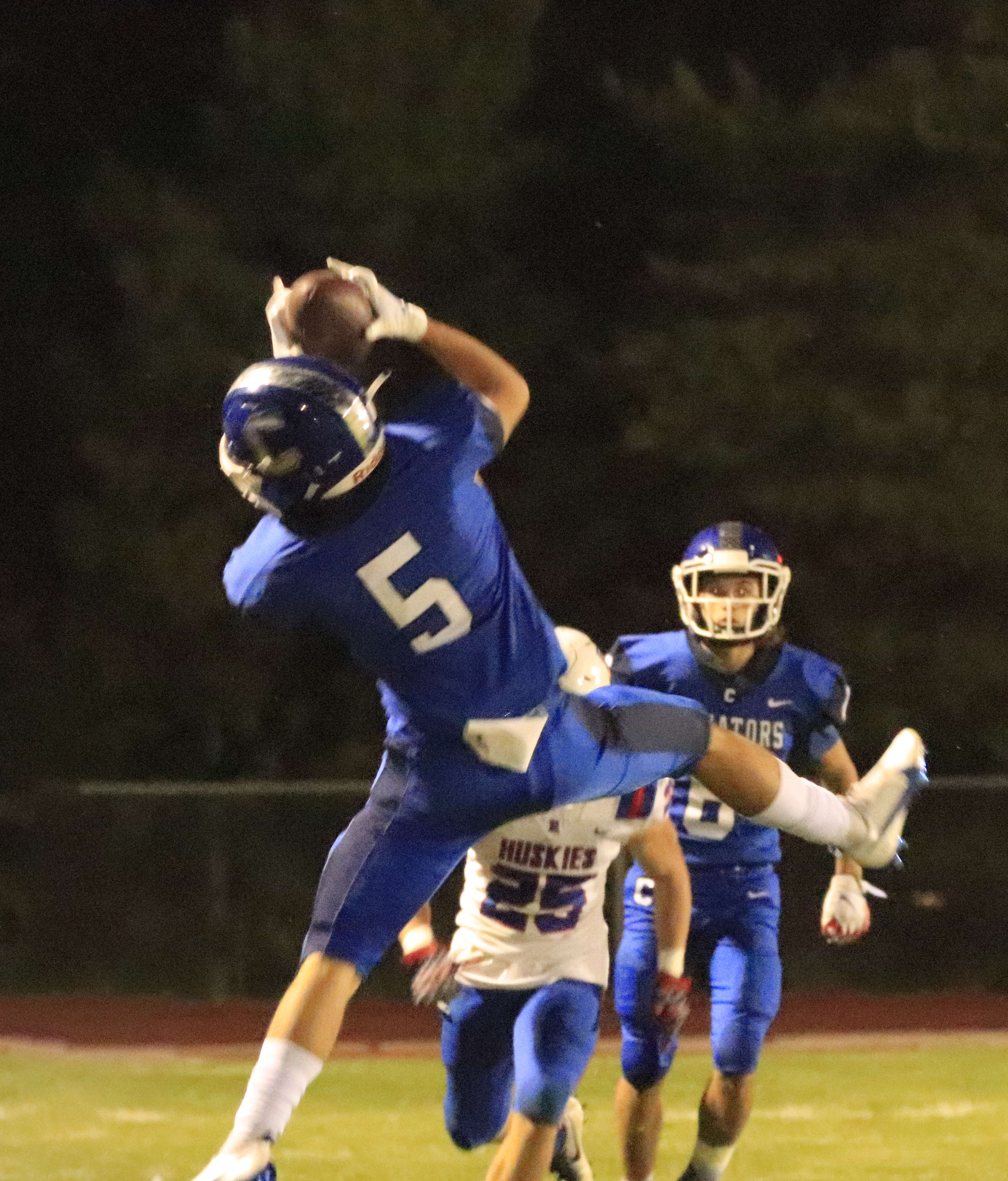 Jacob Campbell makes a leaping catch against Reno Friday night.
(Courtesy: Keli Murphy)
Standup first half
The Huskies put together a 12-play, 67-yard opening drive to take a quick 7-0 lead, but Carson held them off the board the rest of the half.
It took time for the Senators’ offense to find a rhythm, but Carson was able to move the ball into scoring position in the final moments.
Prior to the Senators getting their final possession of the first half, Ioane Tuia made diving tackle on defense to stifle a Husky drive on 4th down.
After the turnover on downs, quarterback Vinny Ferretti lofted a ball up to DeCarlo Quintana for a sizeable, 32-yard gain.
Carson stopped the clock in the waning moments of the half to attempt a 33-yard field goal.
Isaac Avina’s kick had the distance, but was ruled wide right.
The Senators’ offensive line fielded a tough matchup as well.
Early on, Reno stacked the box and the Huskies defensive line threw a tiled alignment at the Senator offensive live, which Roman said Carson had to adjust to.
“We had a rough first half, I give Reno a lot of credit,” said Roman. “The alignment threw us off a little bit. … We adjusted and it was a little better in the second half. We threw the ball better in the second half.”
All in all, the Senator offense has grown quite a bit from last season.
However, Roman said 14 penalties might have been a new team-high under his coaching tenure.
“I don’t know if I’ve ever coached a game where we’ve had 14 penalties. Definitely an area we need to clean up,” Roman said. “A lot of first game mistakes.”
UP NEXT: Carson (1-1) will host Galena (0-2) next Friday night.