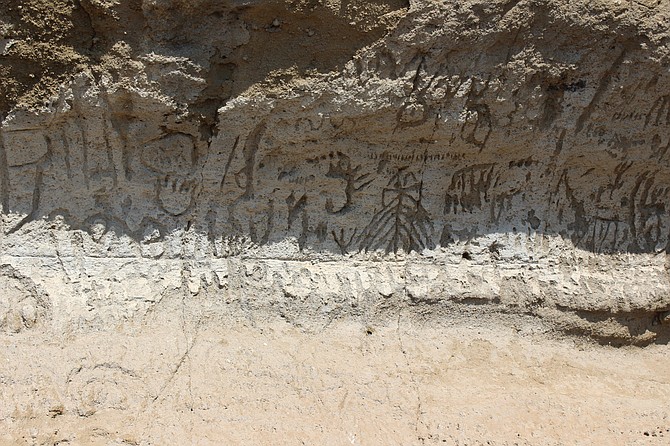 A few of the more than 5,000 petroglyphs found at Petroglyph Point, part of Lava Beds National Monument.

One of the things that makes Lava Beds National Monument so special is that it is one of the longest continuously occupied homelands in North America.
Ancestors of today’s Modoc people resided in the area for thousands of years, leaving behind proof of their existence in the prehistoric petroglyphs (rock carvings) and pictographs (cave paintings) found on the site.
Lava Beds National Monument is located 270 miles north of Carson City via U.S. 395.
The best place to view the monument’s petroglyphs is the aptly-named Petroglyph Point, which can be found at the monument’s northeastern corner. An estimated 5,000 symbols and images have been carved into cliffs there.
Archaeologists believe the carvings to be nearly 6,000 years old. While they resemble imagery found at other locations in California and Nevada, they have never been translated, although some believe they could be related to either religious, hunting or fertility rites.
Petroglyph Point’s carvings are particularly impressive because there are so many and they stretch along the base of the cliff for about a half-mile. A fence erected in the 1930s protects the carvings, although, sadly, there has been vandalism over the years.
Walking along the cliff, peering through the chain-link fence, one can’t help but feel the spirituality of the site. The area around the point was once covered with water, so these native artists would have had to have paddled in their canoes out to the point to create their works on the stone walls.
The carvings at the point apparently were made using a variety of techniques including incising, rough pecking at the stone, simple abrasion and drilling and then connecting small pits to create images. The work includes geometric shapes, a few animal-like images, squiggles and lines.
According to an interpretive walk brochure prepared by Lava Beds National Monument and the Lava Beds Natural History Association, the Modoc people have a myth that explains the creation of the point.
The Modocs believed that one day the world’s creator, Kamookumpts, was resting on the east shore of Tule Lake and realized there was nothing around but the lake. He scooped a massive mound of mud from the lake’s bottom and began to create the world, including mountains, lakes, plants, rivers and animals.
Once he had completed his work, the tired Kamookumpts dug a hole in which to sleep under Tule Lake. He left the hill, where the point is now located, to mark the spot.
Geologists, however, have a different explanation. About 250,000 years ago, the area was an extremely active volcanic region. Magma was expelled from a crack or fault at the site and over time formed a mound of volcanic muddy layers, which, when cooled, became the volcanic “tuff” that forms the hill that is Petroglyph Point.
According to the interpretative brochure, the sheer volume of images and the fact that many are superimposed over each other seems to indicate the point was a particularly attractive and/or powerful setting.
Lava Beds’ pictographs, some more than 1,500 years old, can be found at several of the cave entrances. They are painted in black, a color produced from a charcoal base mixed with animal fat, and white, which was made using a clay base.
The best examples are found at Symbol Bridge and Big Painted Cave on boulders along the trail and on the walls around the entrance. Additionally, pictographs have been found in Fern Cave, which is only open to the public with a Park Service guide. Fern Cave, which actually has ferns growing in it, is still used by tribal members for ritual purposes and is considered a sacred site.
For information about Petroglyph Point or pictographs, go to www.nps.gov/labe/learn/historyculture/rockart.htm. The interpretive brochure detailing Petroglyph Point can be found at http://npshistory.com/brochures/labe/petroglyph-point.pdf.
To reach Lava Beds National Monument, travel north on U.S. 395, through Susanville to Alturas. Continue north on highways 299 and 139 (toward Tulelake). About 45 miles north of Alturas, follow the signs to Lava Beds and Petroglyph Point. There is a fee for visiting the monument.

Rich Moreno writes about the places and people that make Nevada special.