Twenty years later: A day that changed the country

Amodei, Tedford reflect on 9/11 and how a nation won’t forget 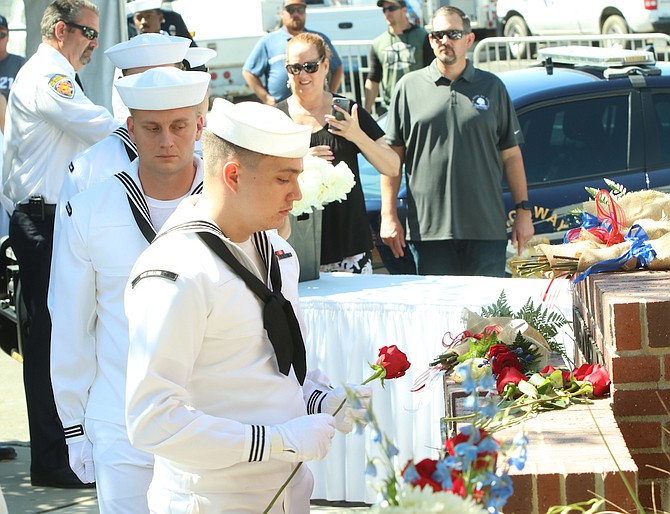 
U.S. Rep. Mark Amodei said he was humbled to be in attendance at Fallon’s annual 9/11 Remembrance Ceremony on Saturday that honored the 2,977 people killed 20 years ago during a coordinated terrorist attack.
Amodei, a Republican who represents Northern Nevada, said the city and people of Fallon are honoring the victims “from the heart” by remembering the passenger jets that slammed into each tower of the World Trade Center, the Pentagon in Washington, D.C., and in a field near Shanksville, Penn., 79 miles southeast of Pittsburgh. 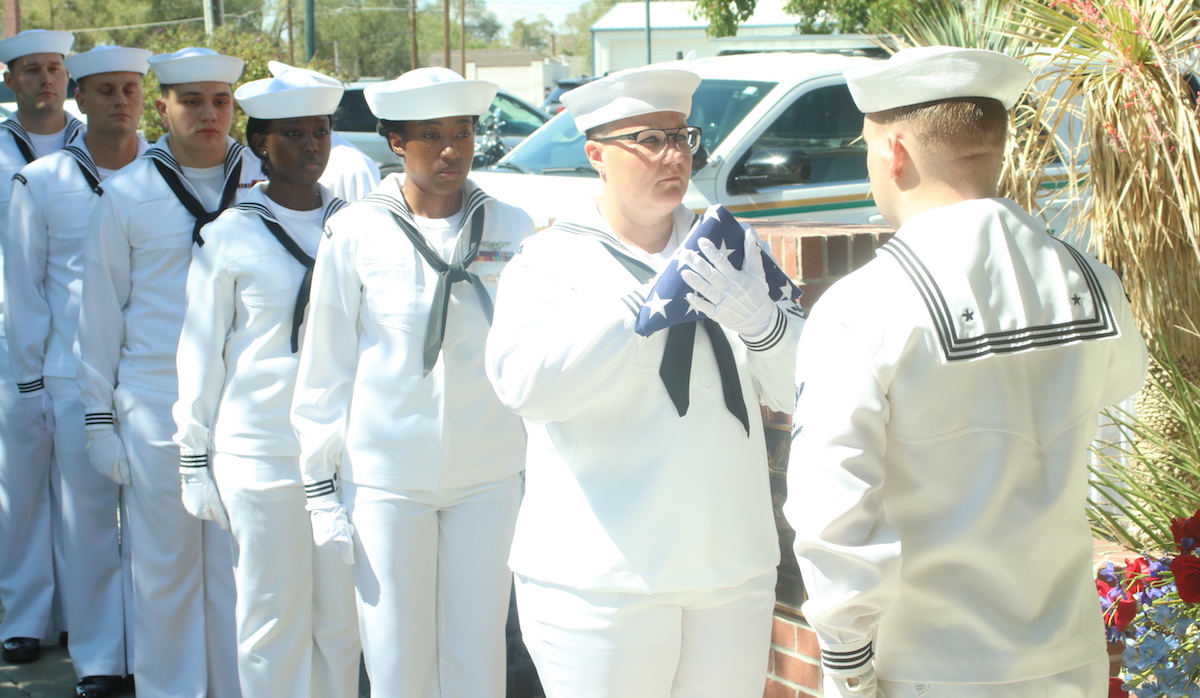 Steve Ranson
The NAS Fallon and Navy munitions command detachment present the Olde Glory Flag Ceremony.
“I’ve been to the memorials at the Pentagon and Shanksville, not Ground Zero,” Amodei said, adding his daughter accompanied him to the memorial in Pennsylvania. “It’s a moving experience to be at that field.”
During the past two decades, Amodei said 9/11 and the aftermath have been unique circumstances in this nation’s history. He said it’s also been unique in the way the people responded. Amodei commended the mayor for what the city has done to recognize the events that occurred on a typical but busy Tuesday morning in 2001. Amodei called Fallon the heartland because of the number of events held annually, its 9/11 remembrance — also called Patriot Day — and because of its relationship with Naval Air Station Fallon. 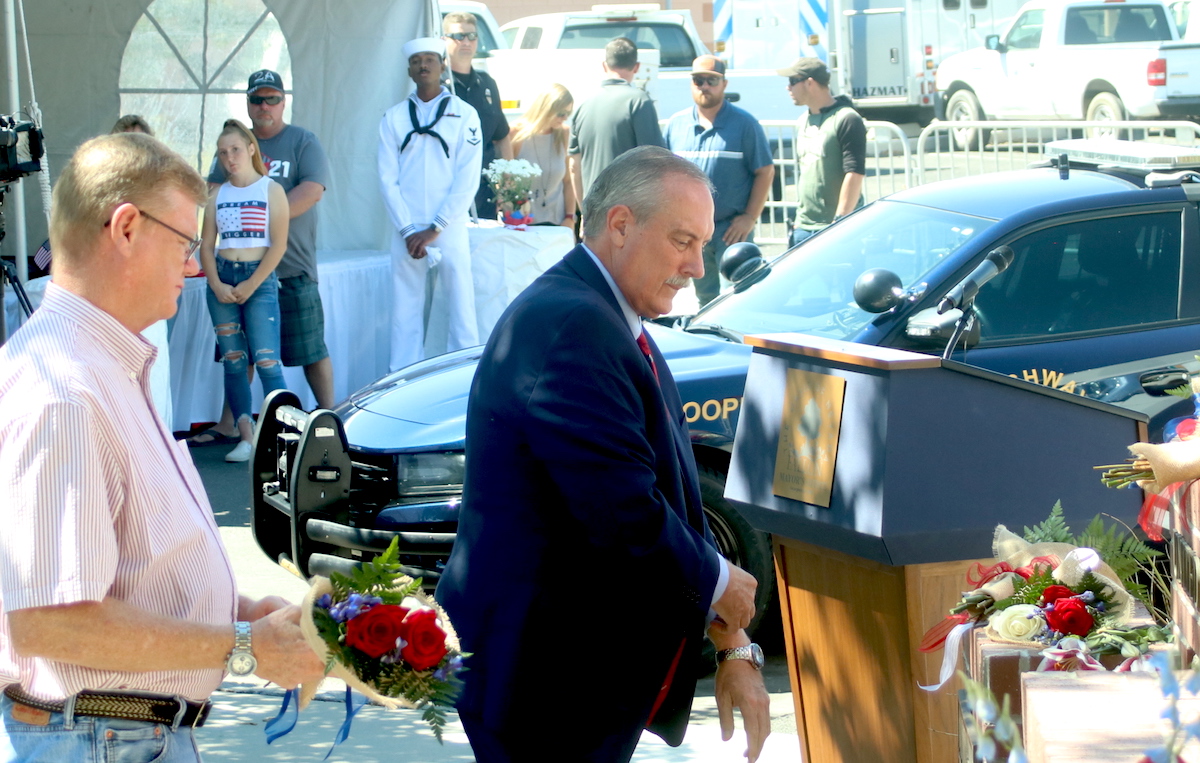 Steve Ranson / LVN
Mayor Ken Tedford, right, and Congressman Mark Amodei place the first roses on the 9/11 Memorial.
“This is really a neat bedrock community,” he said.
The Carson City native also issued a challenge for the next generations.
“It’s possible people like the mayor and me are getting near the end of our public service,” he said.
Amodei surveyed the audience and then said the younger generations will have to step up and become the leaders. As for this year and possibly more 9/11 remembrances, Amodei reflected on what many speakers said.
“We will get through this because we won’t forget,” he added. 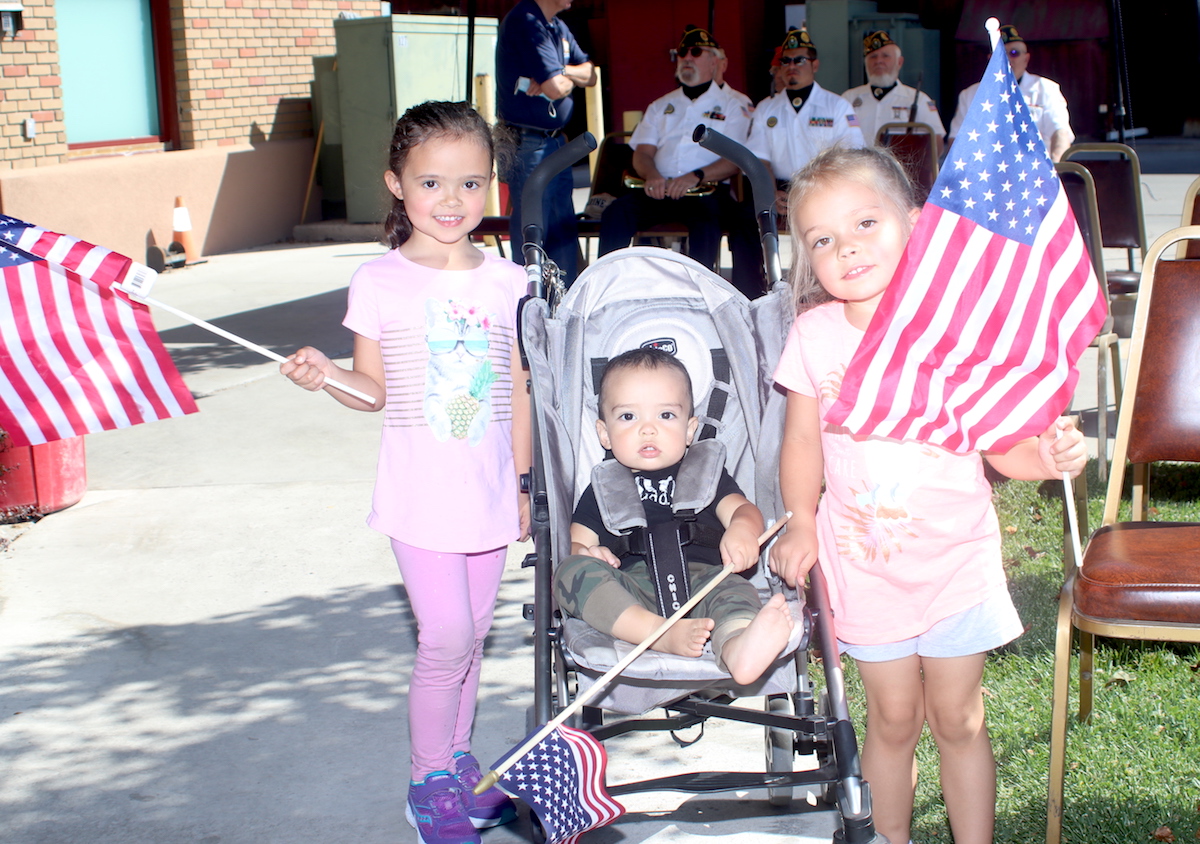 Steve Ranson
Children of all ages waved U.S. flags during the ceremony.
Fallon Mayor Ken Tedford calls the 9/11 remembrance one of the most important events of our lifetime. After the devastating events that were designed to bring America to its knees, Tedford said communities bonded, never looked stronger and showed how the best of humanity emerged.
Tedford said not a single day goes by where families don’t think about the 2,977 innocent souls taken by the 19 terrorists that day. On that day President George Bush said the terrorists cannot touch America's foundation.
“These acts shattered steel but they cannot bend the steel of American resolve,” Tedford said of the former president’s remarks.
The mayor pointed out resolve is one of the beautiful things about the United States and its people.
“Even through the darkest of times, Americans pull together. We are truly one country,” Tedford said.
On Sept. 11 and the days and months and years that followed, Tedford said everyone knew of the evil and what they faced. At that time, Tedford said people came together with purpose.
“We saw the best in humanity, the best in heroic Americans who sacrificed their lives attempting to save others trapped in the most horrifying conditions imaginable,” he described.
He said the first responders made the ultimate sacrifice by trying to save the people trapped in the WTC and Pentagon.
As Tedford concluded, he said the country is united as one nation under God, and America doesn’t bend.
At every ceremony, Tedford reads a chronology of terror to remind those in attendance how Sept. 11, 2001, unfolded, beginning with the hijackers commandeering the jets. The reading precedes the National Moments of Silence for the four jet crashes and the collapsing of both the south and north towers at the World Trade Center.
At the conclusion of the ceremony, first responders and military personnel followed by the community placed a rose on the memorial. Next to the 9/11 Memorial, a number of people also placed roses on Army Spec. Jason Disney’s memorial. Disney, who grew up in Fallon, was one of the earliest casualties in Afghanistan in 2002.
Tedford also praised the community’s cohesiveness. After the attacks, local children wrote letters, the newspaper published a full-page U.S. flag, and a mural was created on a side of a building before Millennium Park was created.
“Fallon and Churchill County. We are always fortunate to be working together for our community,” Tedford said, urging residents should be patient and compassionate with one another no matter the differences.