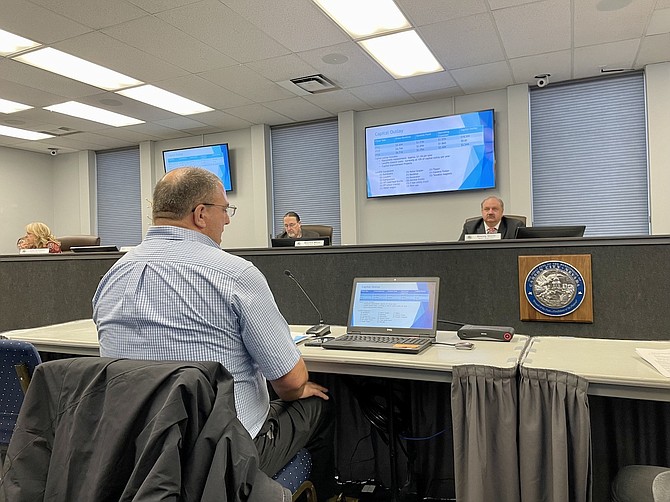 The Carson City Board of Supervisors sent city staff back to the drawing board for proposed new rates at the city landfill.

On Thursday, supervisors directed officials in the Public Works Department to make proposed new rates lower for in-city customers and potentially higher for out-of-city customers. A draft ordinance with a new rate schedule is likely to return along with a business impact statement.

The proposed changes are for landfill tipping fees, not for collection service rates or the city’s franchise fee with Waste Management.

“The rate for the can on the street is not going up,” Supervisor Stacey Giomi emphasized.

Out-of-city rates for solid waste would increase to $74 a ton from $58 a ton.

According to a staff report by Darren Schulz and Rick Cooley of Public Works, the rate increases would raise $1 million a year for capital improvements and operations. The report states the 212-acre landfill has been run by Public Works since 2000 and hasn’t seen a rate change since 2011. Furthermore, the current landfill has 56 percent of volume remaining and could last approximately 20 more years with a conservative estimate of 5 percent growth per year, though that rate could be closer to 7 or 8 percent if current trends continue.

“We’re going to grow the space we got,” Cooley said Thursday.

Approximately 50 percent of waste at the landfill comes from outside Carson, Cooley said. One reason is Carson has some of the cheapest rates in the region.

For example, Douglas County charges $113 per ton of solid waste for all tipping customers.

Supervisor Maurice White said the city should be charging more appropriately for “out-of-city importation of trash.”

“The city experiences that same inflation rate,” she said.

In November, the U.S. Bureau of Labor Statistics reported a 7.7 percent increase in the Consumer Price Index for the preceding 12 months before seasonal adjustment. The question for the landfill is how to balance new rates with long-term needs.

After the hearing Thursday, Schulz told the Appeal that Public Works is planning to build a tipping facility that would make the landfill safer, versus an “open face” dump site. He estimated the project would cost $2 million to $4 million. Schulz explained that after landfill operating expenses are met, Carson City takes a portion from landfill revenue for the city general fund. Remaining profits go toward capital improvements at the site.

Schulz said if new rates are approved, the department would begin design of the tipping facility “immediately.”