Veterans recognized for their educational paths at area colleges 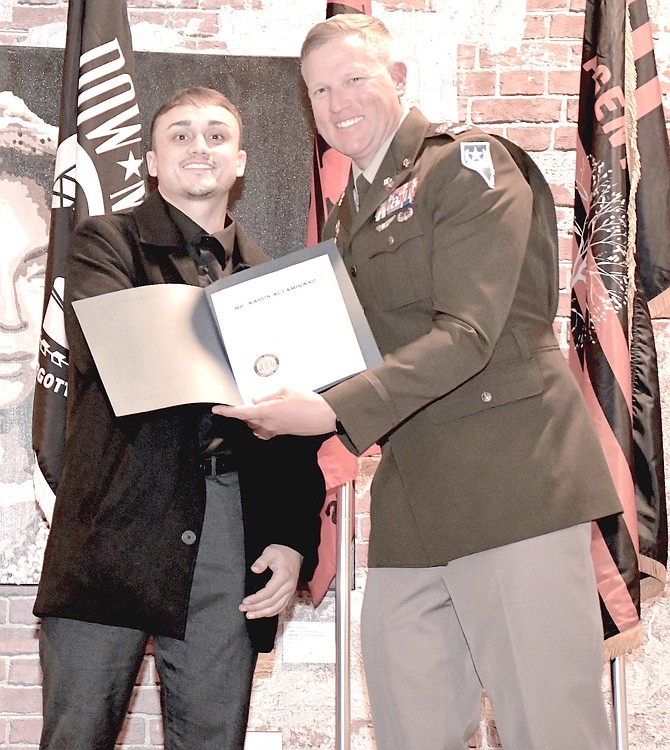 Three local students each recently received a $3,000 college scholarship at the 2022 Camos to Classroom gala sponsored by the Vietnam Veterans of America Sierra Nevada chapter 989.

Those receiving scholarships were Roger Gahan, a U.S. Army veteran seeking a master’s degree in social work; Blake Jensen, a U.S. Air Force veteran enrolled in a radiologic technology program; and Aaron Altamirano, an Army veteran who wants to become a physical therapist.

J.R. Stafford, president of VVA 989, said it was exceedingly difficult to choose recipients because of their backgrounds.

“We had incredible people vying for scholarships,” he said.

This is the second year for the gala, which began last year. Several hundred people attended this year’s event, which included a silent auction to raise money toward the scholarship fund, at the Whitney Peak Hotel in Reno.

“These outstanding scholarship recipients are the future of our nation and are the faces of today’s veteran community,” Stafford said in the president’s welcome. “We have no doubt that their efforts in the classroom today will make a positive difference in our communities of tomorrow and we welcome you this evening as we salute them.”

Chai Cook, director of veterans services at the University of Nevada, Reno, presented Gahan, a resident of Dayton, with the first scholarship. She said Gahan, who’s married and a father of two, served in the Army for 11 years and had five tours to Iraq, Kosovo and Afghanistan as a combat engineer. 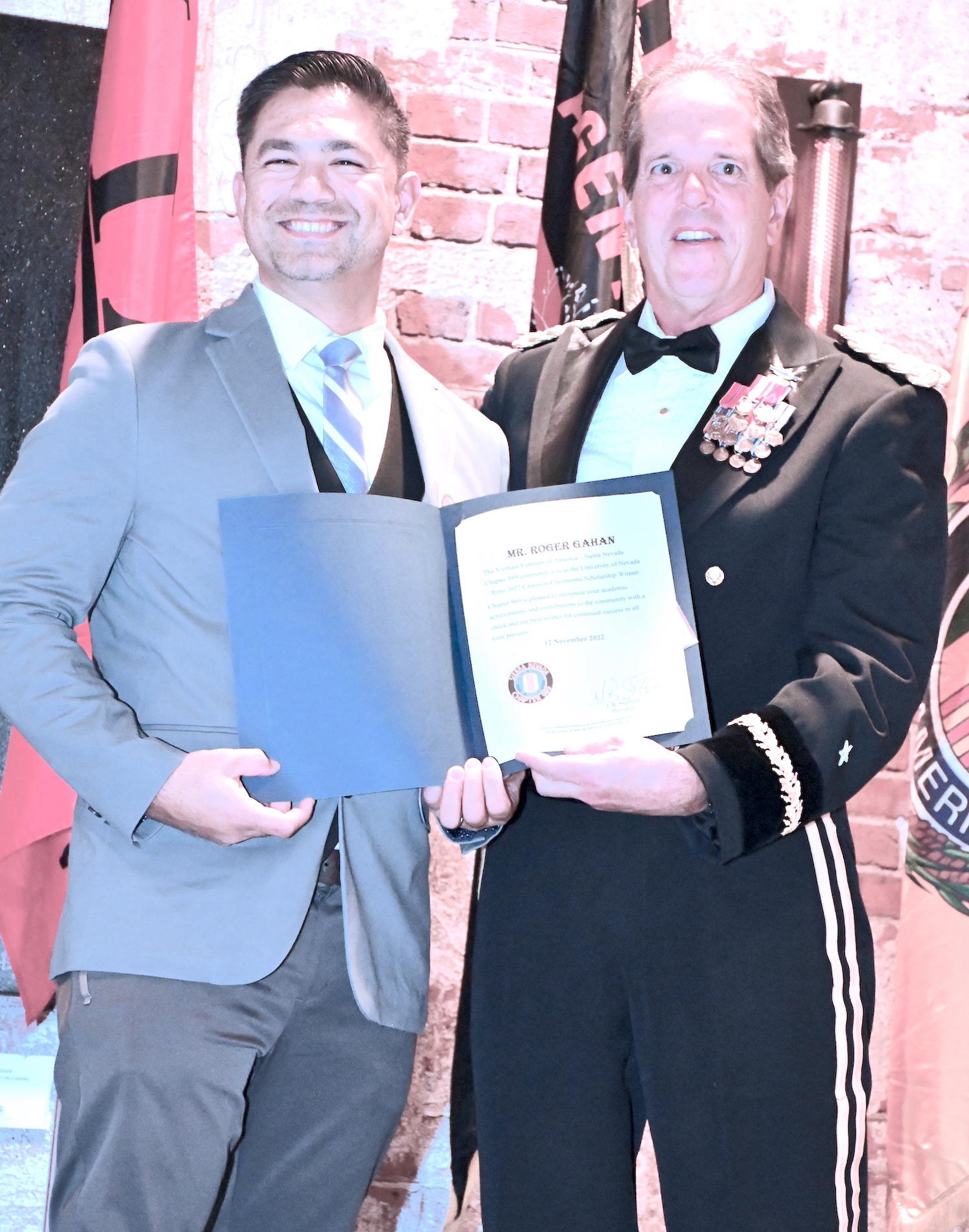 “As a result of the Kosovo tour … he started his career in social work,” Cook said.

Cook described Gahan as a first-generation student, meaning he is the first person in his family to pursue a degree in higher education.

As a graduate student at the university, Gahan has attended a number of orientation sessions for incoming student veterans and he has informed them of the additional educational resources available on campus.

“The university is fortunate to have such a role model for all the students on campus,” she said.

Felipe Gutierrez, program coordinator for veteran services at Truckee Meadows Community College in Reno, presented the scholarship to Jensen, who enlisted in the Air Force in 2013. After completing his basic and advanced training, Jensen reported to McConnell Air Force Base southeast of Wichita, Kansas, as an aircraft hydraulic maintenance technician for the next six years.

“He worked on the KC 135 fueling tanker,” Gutierrez said of Jensen’s first assignment.

The KC-135 Stratotanker provides aerial refueling for the Air Force.

“He plans to pursue a master’s in dosimetry,” Gutierrez added. 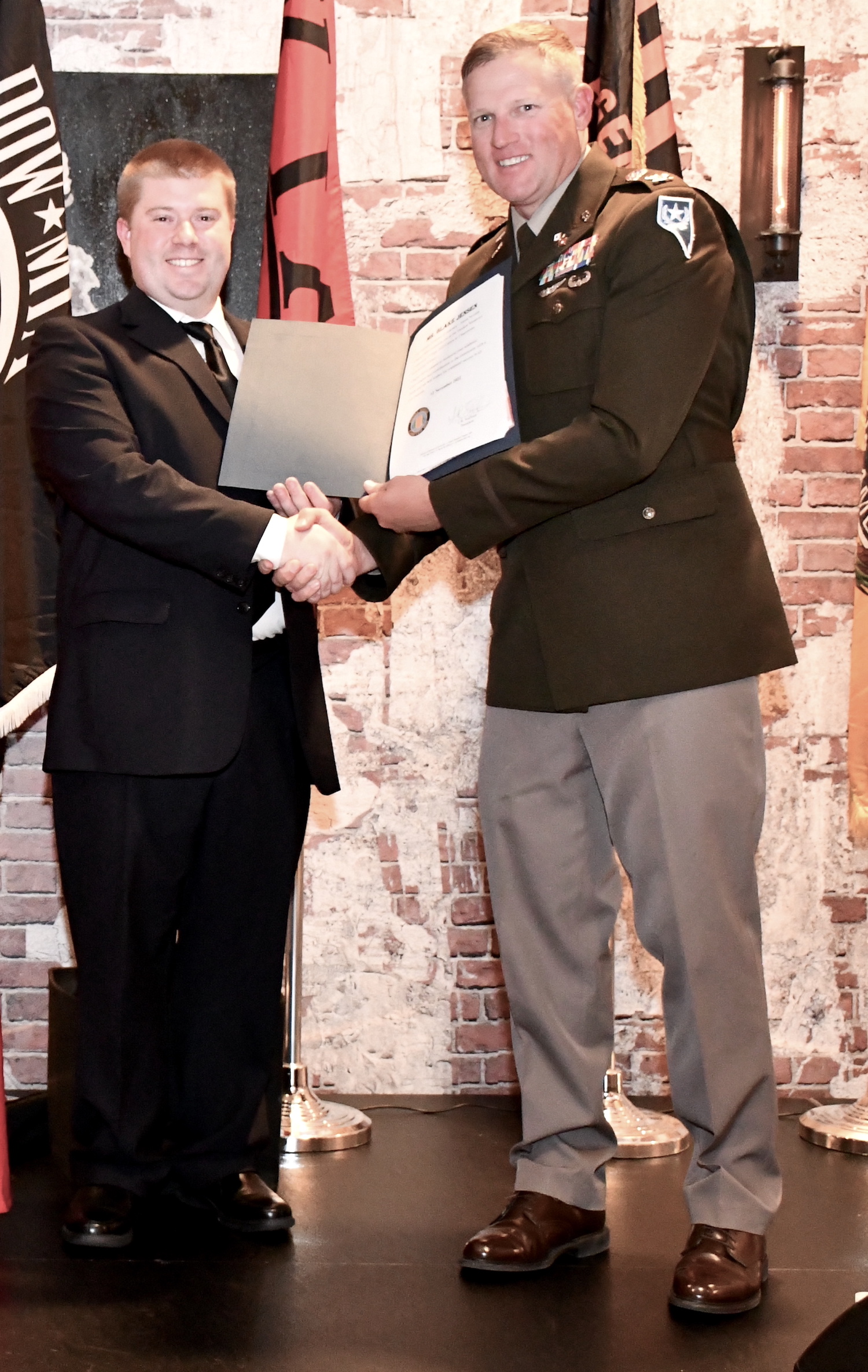 Jonathon Jacobson, a U.S. Marine combat veteran who served a tour in Afghanistan, is the new director of the Veterans Resource Center on the WNC Carson City campus. Jacobson will also spend one day a month at WNC Fallon beginning in January. He introduced Altamirano, an Army veteran he first met three years ago at a fundraiser. Jacobson said he was impressed.

“This is a guy who is going somewhere," Jacobson said of Altamirano.

A 2013 graduate of Carson High School, Altamirano enlisted in the Army and served as a tank gunner at Fort Hood, Texas. His final nine months in the Army were spent on a rotation to the Republic of Korea where he was assigned to Camp Humphreys 40 miles south of Seoul. He achieved the rank of sergeant before he separated from the service in 2016.

“He began to continue his education at Western Nevada where he’s an outstanding student and mentor to other students,” Jacobson said, adding Altamirano maintains a high grade point average.

Jacobson said Altamirano has been an invaluable resource by helping the new veterans entering WNC.

Col. Ronald D. Storer, who enlisted in the U.S. Marine Corps in 1989, was the evening’s featured speaker. Storer is the commanding officer at the Marine Corps Mountain Warfare Training Center about 120 miles southwest of Coleville, Calif.

After he completed his basic training and entered Boise State University as a Marine reservist, he discovered those who were in or completed their military service found a lack of options to help them with their educational costs. 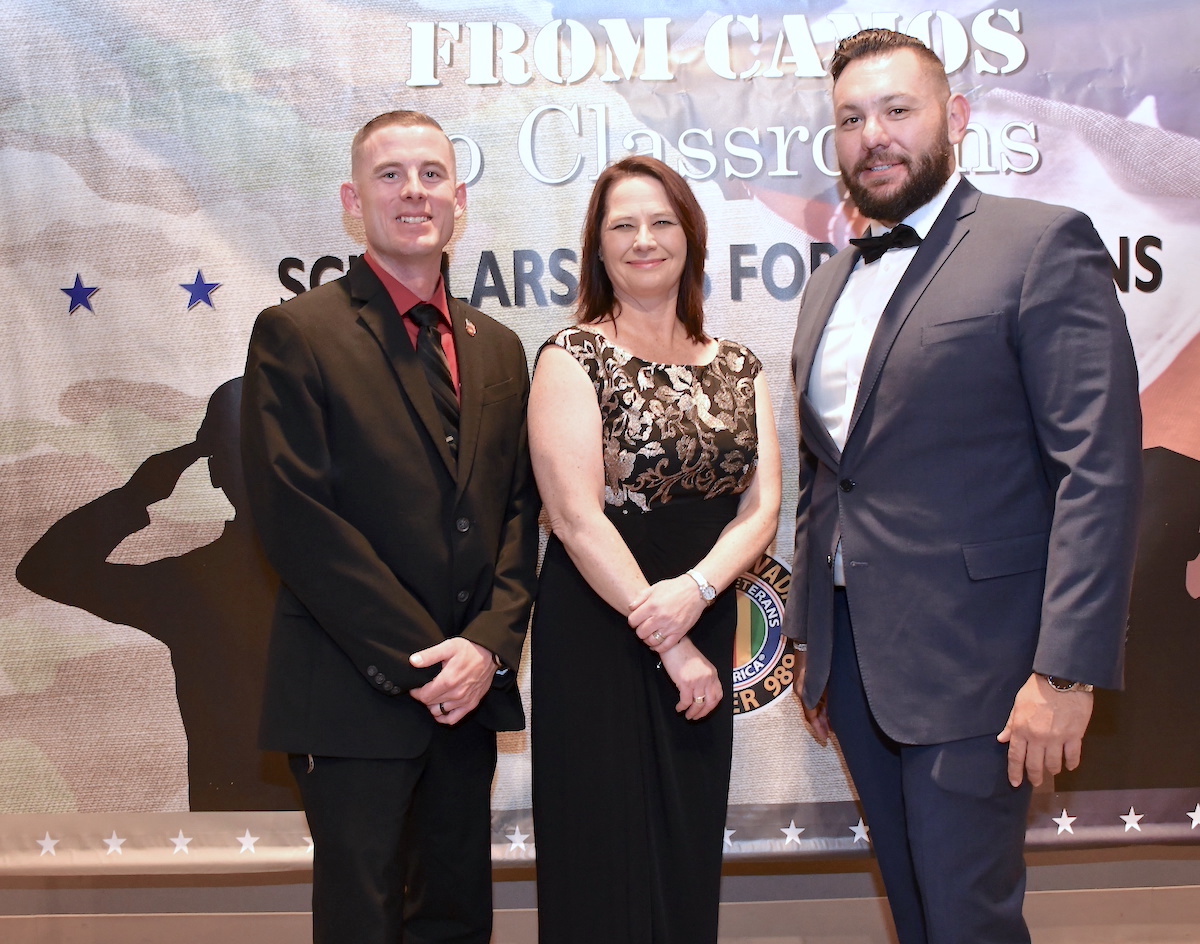 “There was no G.I. Bill in my time,” Storer said, adding his time was cut short at BSU because of a callup of reservists. “I found out I’m liberating Kuwait during my spring break in 1991.”

When he returned to Idaho as a 20-year-old combat veteran, Store said he was able to use benefits (afforded to those who served on active duty) to help him finish college and receive a degree.

Moving ahead to 2003, Storer said he was a captain returning from Iraq and signed up for the Post-9/11 GI Bill. The bill helps the veteran who served on active duty pay for school or job training.

“The VVA was a huge lobbying a member for this 9/11 bill,” Storer said. “You can also transfer this to your kids or spouse. My boy was able to use the scholarship in his first year.”

Storer said this bill is taking care of veterans and also credits the VVA for the help they provide in the communities.

“These veterans are focused on giving back to their communities and for supporting the younger service,” he said.