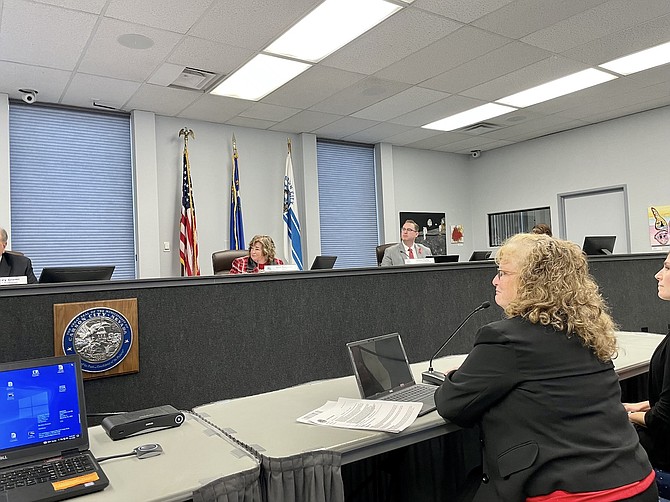 Carson City Health and Human Services Director Nicki Aaker at the Board of Supervisors meeting Dec. 1, 2022.
Photo by Scott Neuffer.

On Thursday, the Board of Supervisors voted to approve converting some pandemic-related contract positions in the division to full-time city jobs.

With nearly $2 million in grant funding, CCHHS will hire two full-time epidemiologists, a public health investigator, and an administrative assistant, bringing the total number of employees in the division to seven.

The federal grants are channeled through the Nevada Department of Health and Human Services.

“With these types of grants, the state typically awards one year at a time,” CCHHS Director Nicker Aaker told the Appeal by email. “We have received the ELC (epidemiology and laboratory capacity) base grant for many years. The current ELC expansion grant is until July 31, 2023; however, the federal project period is until July 31, 2024, so there should not be a problem having our grant extended.”

“During COVID, we had to upstaff to meet the demand quickly,” she said. “To assist with the upstaffing, the state of Nevada HHS worked with the Nevada System of Higher Education and the CDC Foundation, plus we brought employees on from a temporary employment agency. We were able to do this because there were grants given to us for pandemic-related activities.”

Since the workload of the pandemic has decreased, it’s time to reorganize the division, Aaker said.

“Currently, there are 10 (positions) within the division,” she said.

That number will drop to seven under restructuring. Though smaller than at the height of the pandemic, the division will still be staffed enough to meet federal and state reporting requirements and handle any future health crisis, according to a staff report compiled by Aaker.

“We had many more (positions) during the pandemic,” Aaker said. “This proposal also brings all the staff under the city employee umbrella; however, they are still considered grant-funded employees.”

Aaker said about 73 percent of CCHHS is grant-funded.

“By doing this, all the employees will have the same expectations for oversight, policy adherence, wage ranges (specific to position) and benefit packages,” she said.

In other action, supervisors:

• Appointed two members to the Regional Transportation Commission, including the reappointment of Jim Dodson.

The other new member is Lucia Maloney, former transportation manager for Carson City.

“I’m prepared to do that on this board,” she said.

The vote was unanimous.

• Appointed three members to the Open Space Advisory Committee, including the reappointment of Mary Berge.

Two new members are Jay Wiggins, current planning commissioner, and Samuel Mozingo, who said he’s lived in Carson City for three years and is passionate about the area.

“We live in one of the most beautiful places in the world,” said Mozingo.

Members of the Open Space Advisory Committee serve four-year terms – partial terms for resigned seats – and periodically meet with the Parks and Recreation Commission in a joint session.

The board conducted interviews with half a dozen applicants Thursday. Questions focused on the Prison Hill Recreation Area, quality of life within the city, and other topics.

Mayor Lori Bagwell said it takes time for board members to learn to navigate various policies. After the last appointment, she told those not accepted to continue to find ways to serve the community.

The vote was unanimous for all appointments.