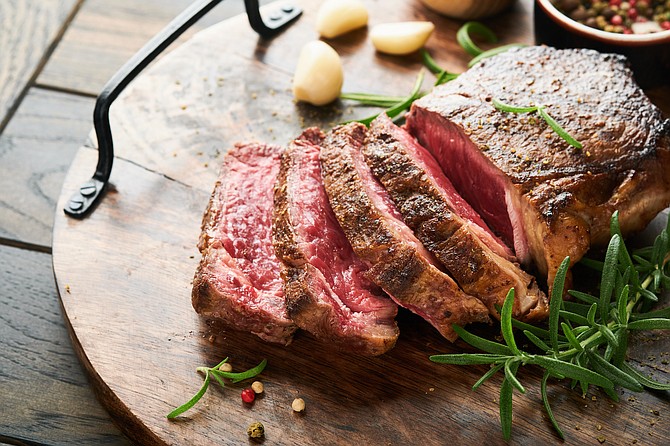 Tradition is defined as a belief or behavior passed down within a group or society with symbolic meaning or special significance, and can be referred to cultural expressions, religions, academics, social norms, or a simple greeting.

Traditions are also seen through recipes passed through generations, and with the holidays upon us, traditional foods among different cultures are plentiful. Take for instance traditional foods from the Jewish culture include brisket, latkes, and matzo ball soup. German cuisine includes roast goose and duck or Rouladen for a main course dinner.

African countries usually make stews, with goat or chicken, while Italians like their pasta and veal roasts. Here in the U.S., we sure like our turkey for Thanksgiving, and our prime rib and ham for Christmas. Proving to be the most popular for those holidays. However, I've noticed changes in traditional foods, especially at Easter. Thirty years ago, leg of lamb was a staple for an Easter dinner, but not so much anymore.

Depending on the weather here, ham is prevalent if the winter is still in the air, and barbecue items are served more if the weather is warmer. Traditions change, but during the holidays one thing is constant: we all get together with our family and friends and it always centers on a meal.

I was told by a customer a couple of weeks ago that the torch of hosting a Thanksgiving meal was being passed to her children, and they didn’t want to go to all the fuss and effort cooking that turkey dinner we all have been accustomed to and so decided to just serve charcuterie trays and call it a day. As a parent I think I would be a bit disappointed with that, but traditions change. My recipe today is a newer holiday meal becoming more popular, possibly a tradition changer. Hope you enjoy it.

• 3–5-pound beef tenderloin (trimmed). When choosing what size, consider 8-10 ounces of meat for each person minimum.

When selecting a tenderloin make sure your butcher has chosen a piece consistent in size. If it’s a whole piece you can ask to have the tail tied back so it cooks consistently.

Season the tenderloin thoroughly with salt, pepper, and tarragon. Preheat the oven to 375 degrees. Heat the olive oil in an ovenproof skillet (cast-iron works great) over medium to high heat on the stove top until hot. Sear the roast on all four sides, turning it with tongs until nicely browned. The goal isn’t to cook the meat but to get a nice crust on the outside.

Brush butter, garlic, and mustard over the roast. Return the roast to the skillet and move it into the hot oven on the middle rack. Roast tenderloin until the thickest part of the roast reads on a meat thermometer: 115 to 120 degrees, about 20 to 30 minutes for rare, 125 to 130 degrees for medium rare and 130 to 135 degrees for medium. When the roast comes to temperature, remove from the pan, and let rest on the carving board for about 15 minutes.

Resting this roast is an important part as it makes it juicier and more tender. In the roasting pan with the beef juices, add the butter, onions, and shallots and brown for several minutes with a medium heat until they become translucent.

Add the rest of the ingredients and simmer for 10 minutes until it reduces and thickens. Cut roast into single servings and serve with a drizzle of your sauce. Delicious and maybe time for a new tradition!