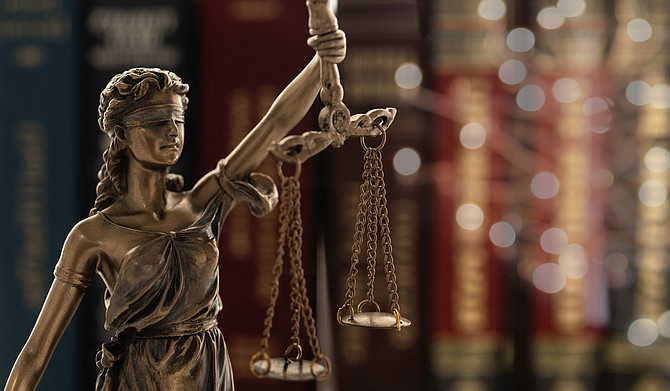 LAS VEGAS – A judge on Wednesday set an April trial date for a former Clark County elected official who has pleaded not guilty to killing a veteran investigative journalist who wrote articles critical of him and his managerial conduct.

Robert “Rob” Telles, a Democrat who was stripped by court order of his position as Clark County administrator, appeared with his attorney, Ryan Helmick, for a brief scheduling hearing before Judge Michelle Leavitt.

Telles, 45, did not speak in court. He remains jailed without bail in the Sept. 2 stabbing death of Las Vegas Review-Journal reporter Jeff German outside German's home.

Helmick declined to comment to reporters after the hearing.

At trial, Telles could face a maximum sentence of life in prison without parole, after Clark County District Attorney Steve Wolfson said last month that he found no qualifying aggravating factors to make Telles' trial a capital case.

The April 17 trial date could be delayed pending a Nevada Supreme Court ruling about whether police and prosecutors can access German's cellphone and electronic devices despite objections raised by his newspaper about revealing the slain journalist's confidential sources.

Attorneys for police, who have German's cellphone and laptop computers, say the criminal investigation won't be complete until those records are reviewed.

The Review-Journal has backing from dozens of media organizations in its fight to prevent the release of the information. It cites Nevada's “news shield law,” which is among the strictest in the nation, as well as federal Privacy Protection Act and First Amendment safeguards.

Defense attorneys said they want to learn whether other people had a motive to kill German.

Telles was seeking a second four-year term to head the county office that handles assets of people who die without wills or family contacts. He lost the Democratic Party primary in June, just weeks after articles that German wrote about “turmoil and internal dissension” in the office Telles headed.

German, 69, spent more than 40 years as a reporter covering courts, politics, labor, government and organized crime in Las Vegas. He joined the Review-Journal in 2010 after more than two decades at the rival Las Vegas Sun.

Grand jury transcripts released this week show the jurors saw photos and videos of a man wearing a bright orange work shirt, a broad straw hat and gray tennis shoes carrying a gray duffel bag with a shoulder strap walking into a side yard of German's home before German emerges from his garage and goes a gate leading to the same area.

“Immediately as he opens up the gate he's attacked by the suspect,” Detective Clifford Mogg told the grand jury, while a prosecutor commented that they “can kind of see a disturbance” at the same time.

The grand jury indicted Telles on a charge of murder with a weapon of a victim 60 years or older.