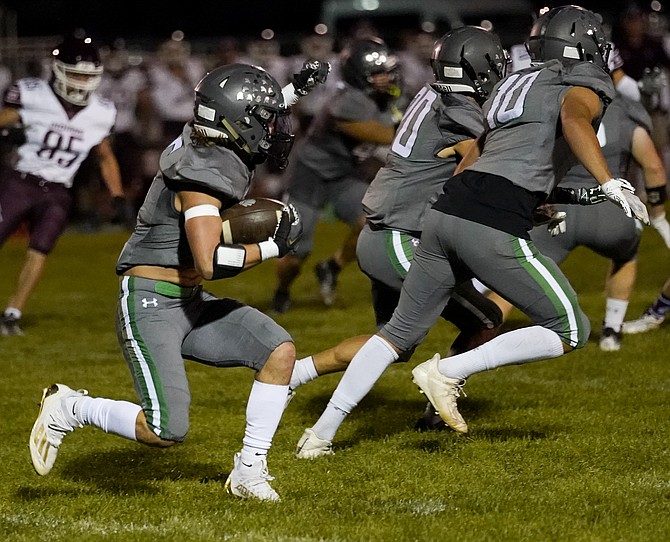 Junior Roland Grondin and the Greenwave couldn’t overcome a slow start on Friday, falling to Spring Creek, 21-20, to end their season.

After a 30-point home loss to Fallon during the regular season, the Spring Creek football team pulled off the one of its biggest upsets Friday.

Playing on the road, the No. 4 Spartans made some big plays on the way to opening a 14-0 halftime lead and taking a 21-0 advantage in the third quarter before the No. 1 Greenwave rose from the canvas at the Edward Arciniega Athletic Complex.

Fallon, though, was unable to climb all the way back — missing a crucial extra point — and Spring Creek is booking a trip to the state semifinals with a 21-20 victory.

“We just couldn’t get into any offensive rhythm,” said Fallon coach Brooke Hill, whose team hung 49 points on the Spartans earlier this season. “They came out and took some of our run game stuff away. We just misfired on some passing early on missed open guys or they didn’t catch the ball. We found our rhythm halfway through third quarter. The kids started to play good football.”

After Fallon’s defense intercepted Spring Creek in the end zone late in the fourth quarter, the Greenwave came up with a huge play of their own — Ethan Tarner beating a shorter defender and breaking away down the right sideline for a gain of nearly 50 yards to around the Spring Creek 25. The Wave inched closer with a throw from Bryce Adams over the middle to Carter Paul around the 15, and the drive was capped with a roll and toss to Tarner for a touchdown on the left side.

With 1:50 remaining, the extra point was missed — Spring Creek clinging to a one-point lead.

The Spartans ran the ball three times — the Wave taking its only remaining timeout — and punted with 16 seconds on the clock. After the return, five ticks remained with the ball around midfield.

Adams threw a quick pass to junior Brady Alves, who lateralled to Jacks streaking down the left sideline. When he received the ball around the 40, Jacks swam around one defender and worked his way inside the 10 but was dragged down by Klayten Piippo, who made another crucial play for the Spartans.

“We had an opportunity to tie the game up, but the kids kept battling,” said Hill, who said the end of the game was similar to the 2011 state semifinal against Truckee when Fallon was a few yards away from the upset victory.

Despite the loss, Hill was proud of his 10-member senior group for leading this year’s team to a No. 1 finish in the 3A North.

“I thanked the seniors for their hard work,” Hill said about his postgame discussion with the team. “A lot of this team will be back. There’s a lot of hope going next year. Football is a great life teacher because you can work your tail off for something, but it doesn’t always mean it will work out. You have to deal with that disappointment and keep moving forward. And that’s what we’ll do.”

A controversial call late in the first half swung momentum into Spring Creek’s favor, giving the Spartans a 14-0 lead going into halftime.

Senior David Hutchison caught a ball on a post for 18 yards, but the Spartans were forced to kick with less than four minutes left in the half. The punt was muffed by Carter Paul around the Fallon 14, and the ball was knocked and into the end zone in a mad scramble — Spring Creek senior Jerry Inama pouncing on the ball for a Spring Creek touchdown. One official signaled touchdown while another indicated touchback.

The PAT by Reasbeck opened a 14-0 lead with 3:33 remaining in the first half.

“One official called touchback but was overruled as a touchdown,” Hill said. “That controversial play put us down 14-0 going into the half. They slowed it down a little bit and used the clock to minimize possessions.

“That’s a tough call in that situation because it puts them up by two scores. That was a huge play in the game. Not that it would have changed the outcome because there was a lot of game to play, but it was a momentum swing for them.”

With time still left in the half, senior Steven Moon returned the kickoff to the Fallon 45, and junior Tarner caught a ball down the seam for a gain of 23 yards. Tarner took a swing pass for seven yards, but Reasbeck picked off a pass that was thrown behind its intended target around the Spartans’ 10 and returned to the 29.

Spring Creek put the offense on the field but was unable to generate a score and went to the locker room with a 14-0 advantage.

The Spartans took the first drive the length of the field, despite consecutive tackles for losses by Fallon senior Tristan Hill. On 3rd-and-long, the Spartans moved the chains with a scramble by senior quarterback Weston Petersen and catch on the sideline by senior Blaze Howard.

Junior Austin Reasbeck ran for 11 yards up the middle, then gained 16 with a tough run over multiple defenders. He carried for six yards on two attempts and senior Chace Valtiera gained three off the right side, setting up 4th-and-1. Reasbeck picked up a first down with a three-yard rush, but he was stopped short on back-to-back runs.

On 3rd-and-long, the Spartans came up big once again — Petersen tossing a dart down the seam to junior Jon Crawford for a 22-yard touchdown. The extra point gave Spring Creek a 7-0 lead with 3:13 remaining in the first quarter.

Fallon gained one first down on its opening possession with a run by senior Brody Jacks, but the Greenwave were forced to punt and got a great roll to the Spring Creek 14. The Spartans moved the sticks once with a draw by Petersen but were also forced to punt for 35 yards to the Fallon 35.

Fallon moved the football on its first drive of the third quarter.

Moon picked up a first down at the Spring Creek 43, Jacks carried or another to the Spartans’ 33 and Adams gained nine on a draw up the middle. Jacks rolled to the 20 for another fresh set of downs, but the Spartans forced a turnover on downs.

Reasbeck broke some tackles for a run to the 33, and the Spartans made a huge play on third-and-12.

Petersen hooked up with senior Piippo on a crosser near the first-down marker, but nobody was near him as galloped 69 yards down the right sideline for a 21-0 lead following Reasbeck’s PAT with 7:24 on the third-quarter clock.

Tarner gained a first down at the Spring Creek 48, and Jacks broke off a big run to the 25 — Tarner bulling his way through defenders for another chain mover at the 11. On fourth down, the Wave scored a touchdown with a throw from Adams to Moon.

The extra point was missed, Fallon cutting the deficit to 21-6 with 3:17 remaining in the third.

Momentum shifted as Spring Creek went for a 4th-and-2 but was stuffed at its own 42.

A penalty by the Spartans on the first snap added yardage and moved the ball to the Spartans’ 20, and Tarner pounded the middle and tacklers to the 2 — going once again on the next carry for a TD. Jacks broke through on the right side for the conversion, making the score 21-14 with 25 ticks on the clock.

Spring Creek received another huge play from Petersen and Piippo, the first throwing an absolute dime and the latter hauling in it for a 36-yard gain on third down to the Fallon 30.

But the drive stalled and a 4th-and-9 fell incomplete.

The Spartans’ defense made a big stop, juniors Caleb Higley and Michael Dorame combining for a stick.

Fallon punted, and the Spartans rolled down the field with a 48-yard yard burst by Reasbeck to the Wave 18. However, another fourth-down try ended in a bad result — junior Carter Paul making an interception in the end zone.