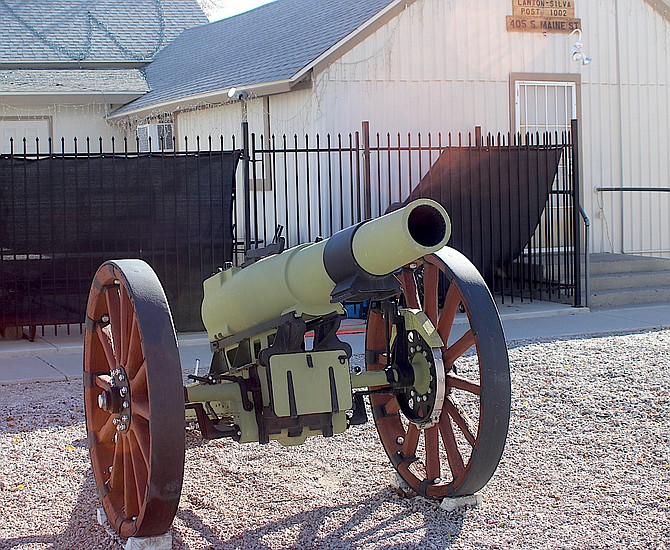 The Veterans of Foreign Wars Post 1002 is celebrating its centennial this year. The post was founded on Nov. 16, 1922.

America was all too eager to help its European friends during the final 20 months of World War I. The United States had broken its neutrality and entered the war in early 1917 almost three years after it had begun.

Many of the European countries did not consider the United States as a world power at the turn of the century, but President Woodrow Wilson pushed Congress to enter the war, especially after German submarines began sinking merchant ships across the Atlantic Ocean. Congress established a selective service and upward to 2 million men heeded the call to serve in the Army. Songs like George Gershwin’s “Over There,” whipped up the enthusiasm both on the home front and overseas.

Over there, over there

That the Yanks are coming

The Yanks are coming

So prepare, say a prayer

We'll be over, we're coming over

And we won't come back til it's over, over there

When the Yanks returned stateside after the war that ended Nov. 11, 1918, many veterans felt inclined to join the Veterans of Foreign Wars, a national organization that rose out of the merger of three veterans societies on Sept. 29, 1899. Small posts sprung up in towns and cities after World War I, including one in Fallon named after a local soldier killed in a July 1918 battle and another, an Army general, who was fatally shot in 1899 at San Mateo, Philippines, during hostilities between U.S. troops and Filipino insurrectionists.

VFW Post 1002 Lawton-Silva received its charter on Nov. 16, 1922, but this month on Nov. 19, the men and women who comprise the membership are inviting the community to join them in the post’s centennial celebration. An opening ceremony begins at 2 p.m. at the post building on 405 S. Maine St., and includes a free carnival, food for purchase, an auction, raffle and historical events.

Mayor Ken Tedford has been invited to present a proclamation plaque, while Fallon businesswoman and city council member Karla Kent also will attend. Her great-grandfather, Ira Kent, was a charter member along with 32 other Churchill County men who served overseas in military conflict.

The dedication of a new VFW hall, though, didn’t occur until 23 years later near the waning days of World War II. Members from all branches of service currently belong to VFW. The March 21, 1945, Fallon Standard said dedication ceremonies for the new hall “took place on Sunday (March 18) with the Nevada department commander, Harry S. Wagner of Winnemucca, as a participant in the ceremony which included the raising of a flag which had been presented by Mrs. Cordelia Brotherson.

“The high school band and men from Fallon Naval air station took part. The band had marched in uniform from the high school building (650 S. Maine St.) to the court house where a parade was assembled to proceed to the VFW hall.”

The article said the color bearers, color guard and flags traveled from the air station. The Greenwave band played the national anthem.

“It is our duty to uphold our flag at all times in all places, in the conflicts of peace as well as in war, that its glorious folds and traditions may not be sullied by enemies from within our without, declared Commander Walter R. Cunningham of Lawton-Silva post, was in charge of both ceremonies.”

Cunningham said, “the VFW was organized a generation ago to commemorate the heroic deeds of America’s sons who had served in foreign lands.”

A letter to mom

Ira Kent, the son of Fallon businessman Ira Heber Kent who began a mercantile business at Stillwater in 1906, was a member of the G.C. 363 Infantry. After the Germans signed the armistice on Nov. 11, 1918, Kent, according to the Churchill County Museum, wrote to his mother on Christmas Day just a month-and-a-half later after the “war to end all wars” had ended. He gave her a snapshot of the waning days of war.

“Well I tell you I have seen the time when I never saw such a bunch of skin and bones in my life as when we came back off the Argonne front. Bully beef and hard tack straight for nine days, only one time we had a few spoons full of hot coffee … Every time we would get out of our hole to go out, a Hun (German slang) would start in to shoot at us with a machine gun.”

Kent continued his letter with a scene from the front.

“On the Argonne front it was more of an artillery battle against infantry (while we were on the line.) The second battalion of the 363rd took over the second line of trenches about five days before ewe went over the top.”

The list of charter members is a Who’s Who of Churchill County. Many rose to prominence as farmers, educators, businessmen or politicians, and as a result, streets within the city limits or in the county have been named in their honor. 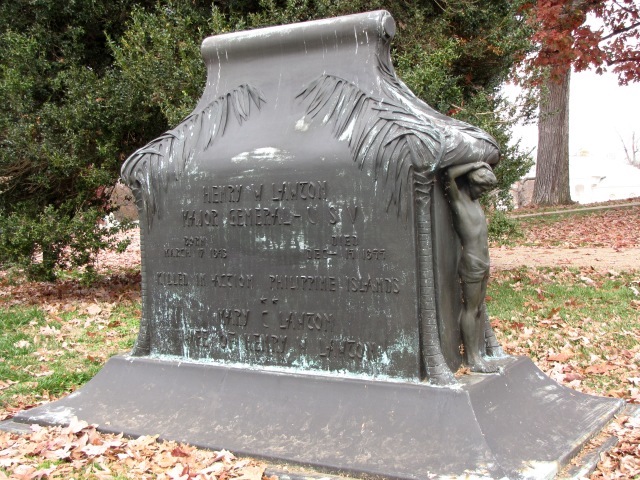 Gen. Henry Lawton is buried at Arlington National Cemetery. The VFW’s purpose was — and still is – an organization to help veterans who fought overseas, the military and communities. The VFW is the country’s largest and oldest war veterans service organization.

Fallon was a small community with a population of 1,758 when the post was chartered. Churchill County, which had a population of 4,649 at the turn of the decade, became known more for its agricultural and green fields of alfalfa and crops, than any other commodity. Construction ended on a new two-story high school on South Maine Street which received its first students in 1917.

After the war, community members and the young lads saw soldiers camp in Fallon during a convoy of about 54 military vehicles (more were expected to join on the route) traversing the Lincoln Highway, the first transcontinental road for automobiles in the United States that was dedicated in 1913.

A lieutenant on the convoy by the name of Dwight D. Eisenhower, who later to rose to prominence as a World War II general and later as president of the United States from 1953-1961, served as a logistics officer, according to numerous accounts.

Five men from Churchill County died due to their service during World War I.

George Davis died in a hospital in France from pneumonia on June 29, 1918. The headline from the Churchill County Standard read, “George Davis makes the supreme sacrifice — Unexpected death brings grief to host of friends of beloved young man.”

A cablegram arrived at the home of C.N. Davis notifying them of their son’s death.

From a paragraph in the Standard: “His death was the result of an attack of pleurisy which developed to pneumonia, and although it was known to his parents — that he was confined to his bed in the hospital, the news from overseas came as a shock to his home.”

“‘Jimmy’ Hall, as he was familiarly known in and around Fallon, is the second Churchill County boy who yielded up his life, and he is buried in the soil of France.”

George L. McCall died Feb. 13, 1919, as a result of being struck by a train. The Army sergeant served in Battery E 348 FA and was in postwar France as part of an occupation force, according to the Fallon Eagle.

The soldier was the son of Assemblyman David McCall of Churchill County who received details of his son’s death in a letter from the unit’s first lieutenant, Harold H. Huston.

“We are all grieved to learn to learn of the sergeant’s death, for he has always been a good soldier and a very valuable man in the battery,” the letter from his commanding officer said.

A dated record, however, indicated McCall had died from meningitis on Feb. 13, 1919.

Pvt. Harold Charles McCarthy, who was born in Crockett, Calif., but later moved to Fallon, died from lobar pneumonia following influenza. The 18-year-old soldier had been assigned to Army Trang C University of Nevada until his death.

Pvt. Alexander Silva of Fallon was killed in battle on July 18, 1918, in France. The 20-year-old soldier was born in Portugal before coming to the United States. He enlisted in the Army in Fallon on Sept. 5, 1917.

During his service, the Army assigned Silva to two infantry companies after he arrived in Europe on July 18, 1918, the first day of the Aisne-Marne offensive.

News of his death was sent to his brother. According to Churchill County Museum archives, Silva was the only soldier from Churchill County who died in battle and is buried in the Aisne-Marne American Cemetery in France.

The other namesake associated with the Fallon post lived in the 1800s.

Henry Lawton, who was born in Ohio in 1843, grew up in neighboring Indiana. During an early campaign in the Civil War, he fought in western Virginia with the 9th Indiana Volunteers. Shortly before the war ended, he was brevetted with the rank of colonel.

After the war, he rose through the ranks, beginning as a second lieutenant with the 41st infantry to general at the outbreak of the Spanish-American War. Lawton died on Dec. 15, 1899, in the Philippines when a bullet struck him in the chest. According to an account of his death, Lawton yelled, “I am shot” and then died. Lawton, a popular Army officer who was deeply mourned by both the Army and the civilian population, is now buried in Arlington National Cemetery.

The Lawton-Silva Post 1001 of the Veterans of Foreign Wars is celebrating its 100th year anniversary on Nov. 19 at its hall on 405 S. Maine St.

Since 1922, the local VFW chapter has provided a century of service to Fallon and the Lahontan Valley community.

The opening ceremony begins at 2 p.m., and it’s free.

Included in the afternoon’s celebration are a carnival, food for purchase, an auction, raffle and historical exhibits.