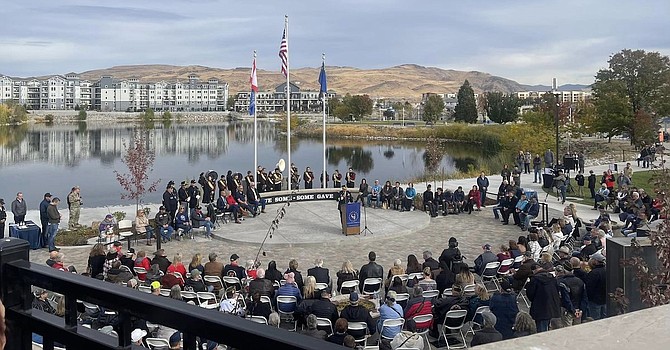 The Nevada Veterans Memorial Plaza in Sparks was recently dedicated.

On a cool, early November afternoon in front of a glassy lake on 300 Howard Drive on the west side of the Sparks Marina, close to 1,000 people came out on Nov. 4 to celebrate the official grand opening of the Nevada Veterans Memorial Plaza.

Eight years in the making, the dream of late Mayor Ron Smith came true with this special statewide commemoration to honor and preserve the legacy of Nevada’s 896 fallen service members who fought for our country dating back to 1864.

In an hour-long ceremony in front of the phrase “All Gave Some, Some Gave All” embedded into the plaza, the Sparks City Council, including project lead and Councilman Kristopher Dahir, along with Washoe County Commissioner Vaughn Hartung, Sparks Mayor Ed Lawson, Attorney General Aaron Ford, and other dignitaries spoke about what the NVMP means to the city of Sparks and all of Nevada. The Sparks High School Railroaders marching band played, and residents of the local state veterans’ home were in attendance (including a few who attended the 2019 groundbreaking).

“We believe that it is our responsibility to build a plaza to honor our veterans who allowed us the freedoms and rights we enjoy today, and to have a place to commemorate the brave actions of future generations of service men and women,” Dahir said in the ceremony.

Then a group of children came up and cut the ribbon, “because this is all for them and they’ll still be around to see it,” Dahir added.

The NVMP team has raised $1.3 million in donations to help build the Memorial Plaza, which includes new landscaping, benches, the pavers/plaques/statues, educational information, an area for veterans’ organizations to hold meetings, and more than 1,000 commemorative bricks that people bought to support the project’s construction.

Bricks are still being sold and range from $100-$1,000 with proceeds going toward further construction and maintenance. Several kiosks are earmarked to be placed along the Ron E. Smith Educational Path next to the marina, describing the veterans’ stories of sacrifice throughout the decades.

Dahir and the NVMP team placed the time capsule in the ground on Nov. 14 that contained notes, challenge coins, a Ron Smith memorial coin, a Letter of Legacy, and the signatures of the people who attended the Nov. 4 grand opening ceremony, to be opened in 50 years.

“I encourage everyone to come out and see it. You feel what’s there; it definitely makes you pause,” Dahir added.

The Spark Tribune belongs to a consortium of Northern Nevada newspapers and online news sources that exchange and publish military news.