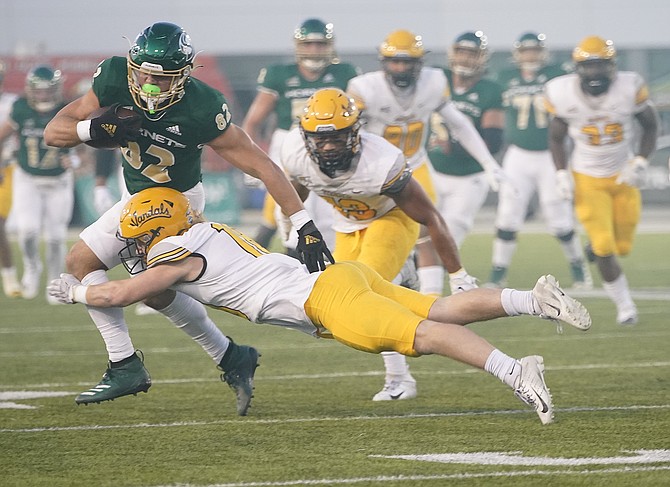 Idaho’s Tommy McCormick wraps up a Sacramento State receiver in the Oct. 29 game in Sacramento.

A trio of ex-Greenwave football champions returned to the region.

Sean and Tommy McCormick, playing for Idaho from the Football Championship Series, visited Sacramento last month as the Vandals took on a top-five foe, Sacramento State. Idaho led late before giving up a touchdown in the final minute as the Hornets escaped with the win to stay unbeaten on the season.

Despite a 44-26 home loss to UC Davis on Saturday, Idaho’s been having a much-improved season with a new coaching staff. The Vandals jumped into the FCS Top 25 last month after upsetting Montana on the road on Oct. 15 before blowing past Portland State the following week.

Both McCormicks play in the secondary with Tommy, a sophomore, being No. 1 on the depth chart at defensive back while his brother, who’s a year older and a junior who graduated from Fallon in 2019, is his backup but plays on special teams as well. Tommy McCormick is fourth on the team in tackles with 50 and is tied for the team lead in interceptions with four to go with one fumble recovery. 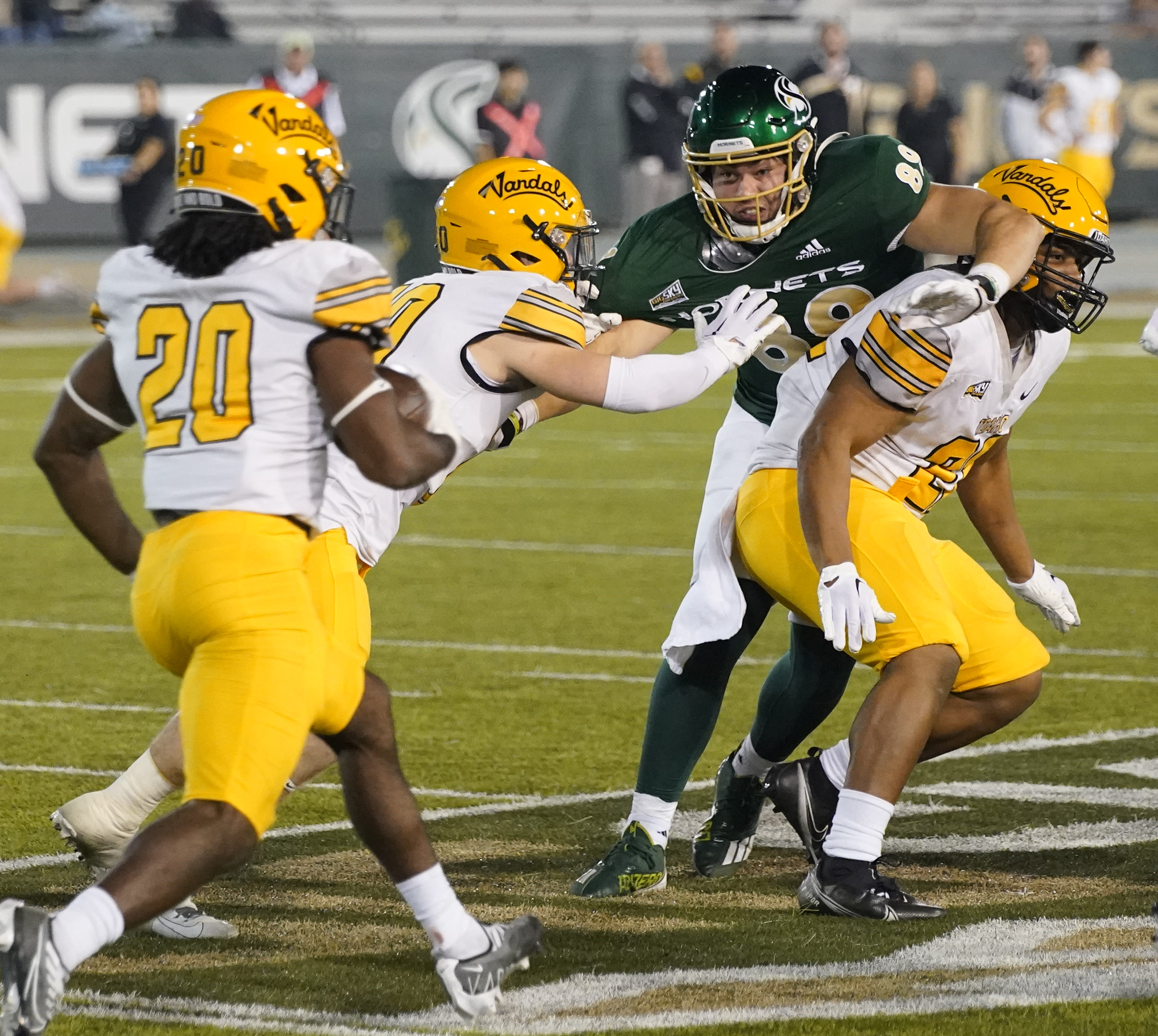 Idaho’s Sean McCormick blocks on a kickoff return in the second half of the Vandals’ game at Sacramento State on Oct. 29.

Idaho ends the regular season on Saturday at Idaho State.

Another Fallon alum returned to Reno over the weekend as Ben Dooley and Boise State dismantled Nevada, 41-3, at Mackay Stadium. Dooley, who had a breakout year in 2021, has been sidelined with injuries this year as a redshirt junior, but the 2019 grad was on the field as a left guard for several series against Nevada. On a Broncos touchdown in the first half, Dooley had a key block to pave the way.

The Broncos, who have rebounded in the second half of the season, lead the Mountain division with two games to go: this Saturday at Wyoming and Nov. 25 vs. Utah State.

Both McCormicks and Dooley played on the 2018 Fallon state championship football team when the Greenwave defeated Truckee. All three also won individual state wrestling titles the following winter in Winnemucca. 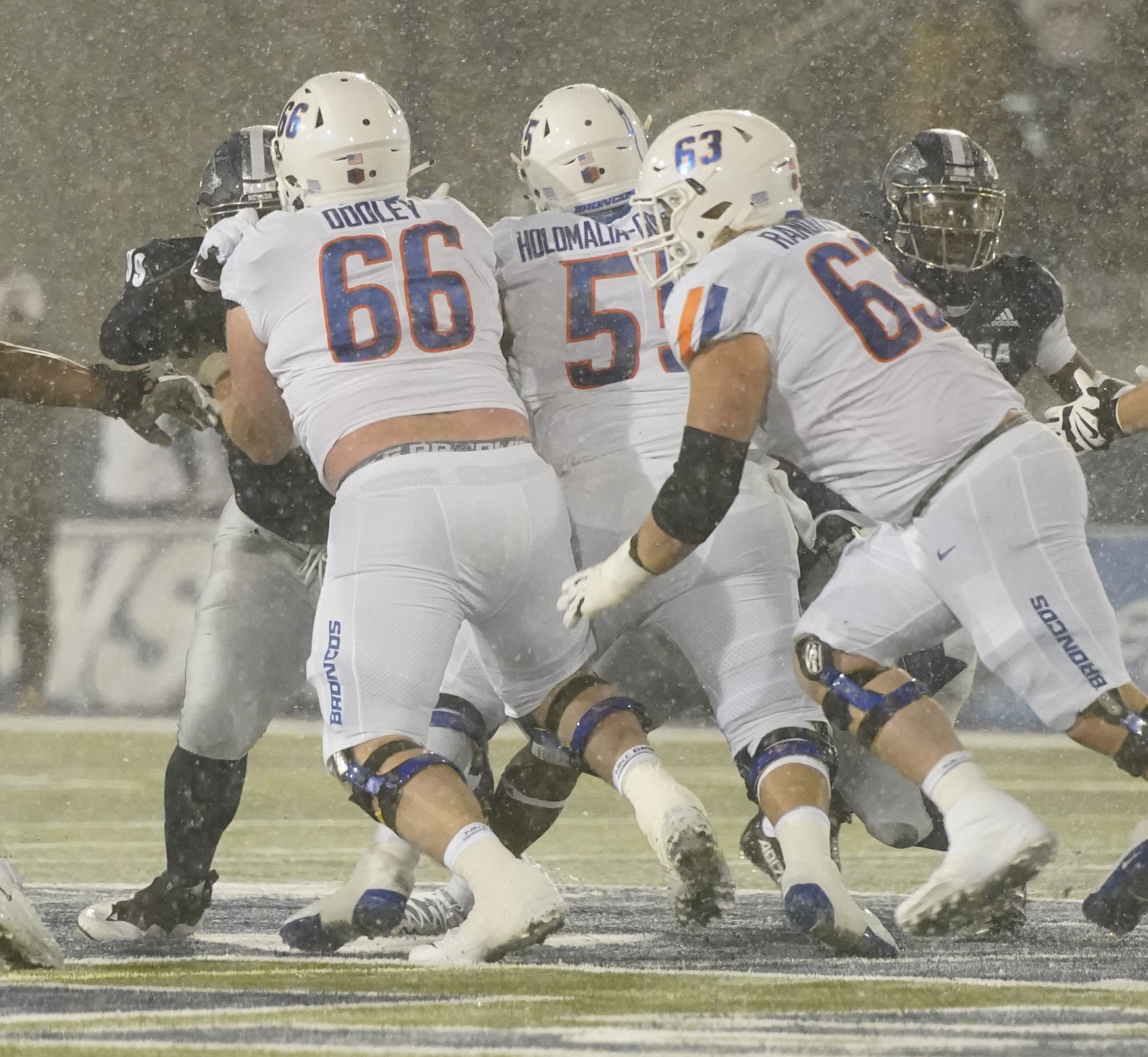 Boise State’s Ben Dooley blocks a Nevada lineman, creating a hole for a Bronco touchdown in the first half on Saturday.