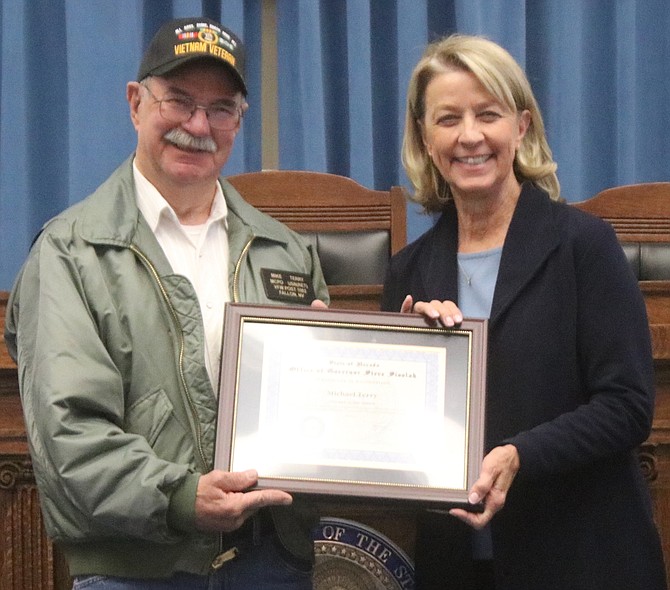 The short ceremony was conducted in the Old Assembly Chambers at the Capitol complex in Carson City.

Michael Terry, who retired in the 1990s as a master chief petty officer in the U.S. Navy, accepted the honor for July. NDVS Director Fred Wagar commended Terry not only for his military service but also for his work with new petty officers from Naval Air Station Fallon and his hours of dedication involving students and teachers with Veterans of Foreign Wars programs.

Wagar said Terry worked alongside other VFW coordinators in Hawthorne and Tonopah to select the top students in both the Voice of Democracy speech contest and Patriots Pen essay contest. Terry also reviewed packets for individuals nominated as outstanding teachers.

“He worked to honor teachers who incorporated American ideas into their teaching,” Wagar said.

Students in Churchill County have continually been among the top winners in state judging, and several students have won the state competition to move on to nationals.

In 2017, Steve Johnson, a Churchill County High School chemistry teacher, was named the VFW National Teacher of the Year.

In 2021, for example, Terry worked with the new chief petty officers to clean and make repairs to Fallon’s VFW Post 1002 building. The sailors also cleaned up property one year ago that belonged to two disabled veterans.

William “Bill” Baumann also received recognition for his countless hours of service. Baumann, who served under four governors and four NDVS directors, had been appointed to serve on the Veterans Services Commission and the Southern Nevada Veterans Memorial Cemetery Advisory Committee. He worked on NDVS committees for 17 years.

“He helped improve the quality of life for countless veterans, military members and their families,” Wagar said.

According to Wagar, Baumann also worked tirelessly to reduce the homeliness for veterans, took an active role in suicide prevention, supported construction of the Northern Nevada State Veterans Home in Sparks, which had its ribbon cutting in December 2018, and became involved with the Disabled American Veterans.

“He also shaped legislation on the national level,” Wagar said, adding Baumann also worked with the United Veterans Legislative Council to improve life for the National Guard, reservists and their families.

Veteran Affairs noted Baumann has spent more than 18,000 volunteer hours helping veterans, which, Wagar said, has been a driving force in his colleague wanting to help veterans. 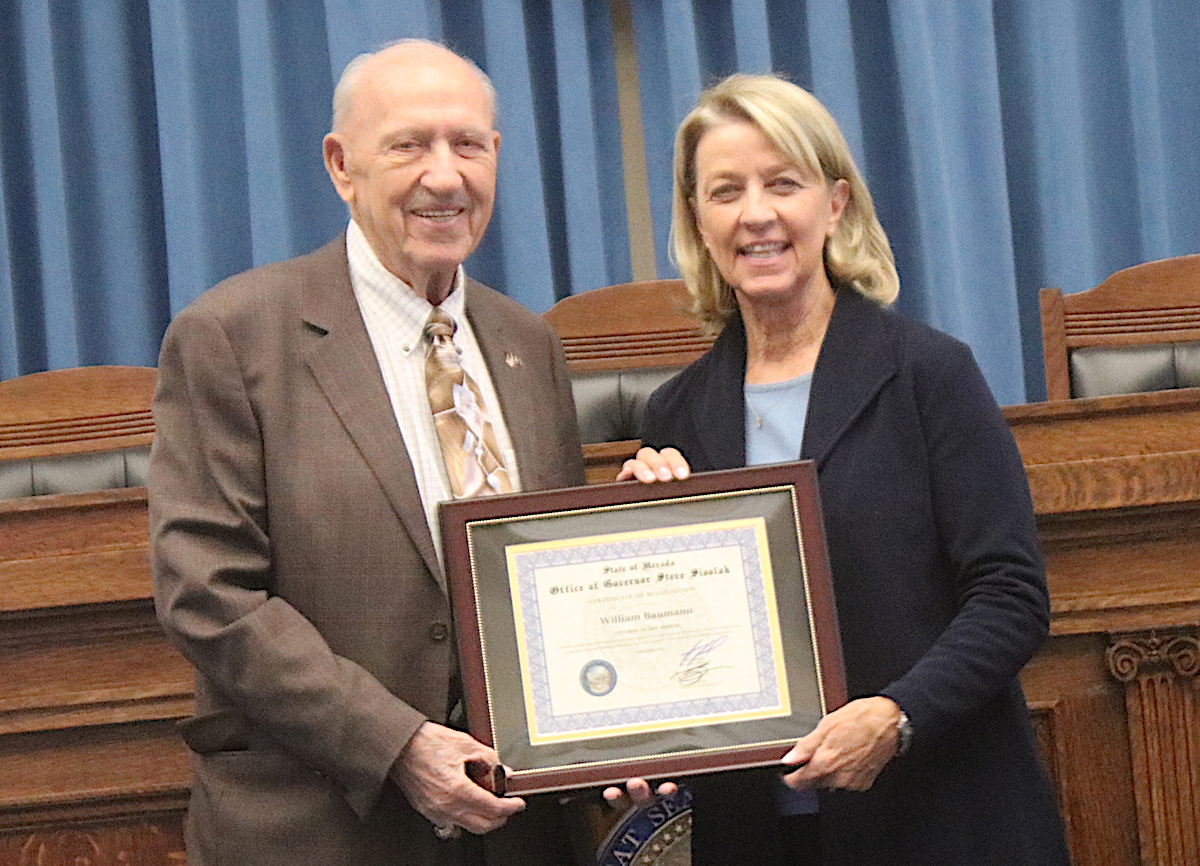 Previous Veterans of the Month surround William “Bill” Baumann, center, and outgoing Nevada Secretary of State Barbara Cegavske during a recent ceremony at Old Assembly Chambers on the Capitol complex in Carson City.

Baumann thanked many of the veterans who attended the ceremony for their support during the years.

According to the NDVS, “Baumann and his colleagues worked to develop innovative irrigation solutions to keep Nevada’s Veteran Memorial Cemeteries beautiful and pristine. His work on the VSC also provided support for Veterans Court Programs and veteran caregivers. They also worked to expand VSC membership and provide additional support for Nevada’s Veterans Service Officers.”

Baumann served in the U.S. Air Force and was also named the September Veteran of the Month because of his extensive volunteer work for veterans.

Wagar also recognized two other individual for Veterans of the Monty in July and November, respectively.

The third Veteran of the Month is Matthew Cole of Reno. The retired Navy commander is November’s Veteran of the Month. Wagar said Cole brings his skills in operational planning to his position at Amazon as a Military Pathways Operations manager. Cole supports Reno-area veterans and their families by ensuring their needs are met.

According to his nomination, “Matt works to connect community organizations with Amazon to give back to those in need. Through his work to create the Katie Grace Foundation and Amazon partnership, many local nonprofits including the CARES homeless campus, The Eddie House, Humane Society, community gardens, are benefitting from generous donations of goods, food and clothing.”

The Courts Assisting Military Offenders (CAMO) program in Reno was the December 2021, Veteran Supporter of the Month. Wagar said CAMO-RNO offers a second chance for veterans who have broken the law.

“The team accepted 35 to 40 individuals a year in a four-phase treatment program,” Eagar said. “They graduated over 30 veterans.” The nomination cited the CAMO-RNO program is a 12-to-18 month treatment option for high risk/high need offenders when they also struggle with substance abuse or mental health issues.

The September 2022, Veteran Supporter of the Month is the Nevada Peer Support Network, Inc., a nonprofit group. Their mission, according to the nomination,­ provides mental health resources and support for veterans, first responders and hospital care professionals.

The network’s mission and vision is to smash the mental health stigma of getting help early and often.

Building mental readiness is a strength and not a weakness,” reads their nomination. “No one ever has an issue sharing that they have cancer or broke a bone, but when it comes to an injured mind, many are scared to seek the resources essential to healing that organ under the skull.”

Outgoing Nevada Secretary of State Barbara Cegavske spoke prior to the awards. She commended the veterans and support groups for their volunteer work on behalf of the state’s veterans and their families.

“It is such an honor to be here today to recognize each one of you,” she said.

Cegavske said the NDVS honors the volunteer hours put in by individual and groups and their support of the veteran community in Nevada. She also said her late father served in the Navy, and she also had 10 siblings. All eight boys enlisted in the Army.