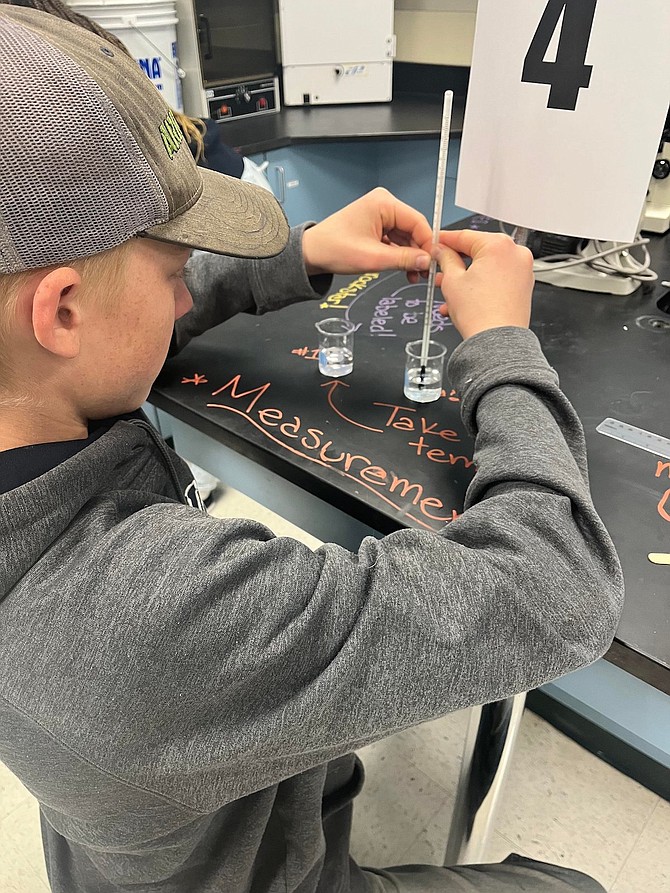 Kirsten Ritchie’s freshmen biology class took a non-traditional exam to wrap up their unit. Ritchie transformed her lab into a hands-on testing space.

“I like to give non-traditional exams to reduce testing anxiety and create a visual environment to test my students,” Ritchie said.

Students rotated through six stations and answered questions at each one. Vice Principal Rachel Knight said seeing this approach to testing made her so happy as an administrator.

“Kirsten transformed her lab and made a real-world testing experience for her students – really taking her exam to the next level,” she said.

Student Jeana Lee said the test set-up helped her because it was not only more engaging but it was more fun than a traditional test.

“It wasn’t like an average test in class, where you’re given a paper and expected to be engaged,” he said. “Everything was visual and hands-on making it easier for me to focus. I wish tests were like this in all my classes.” 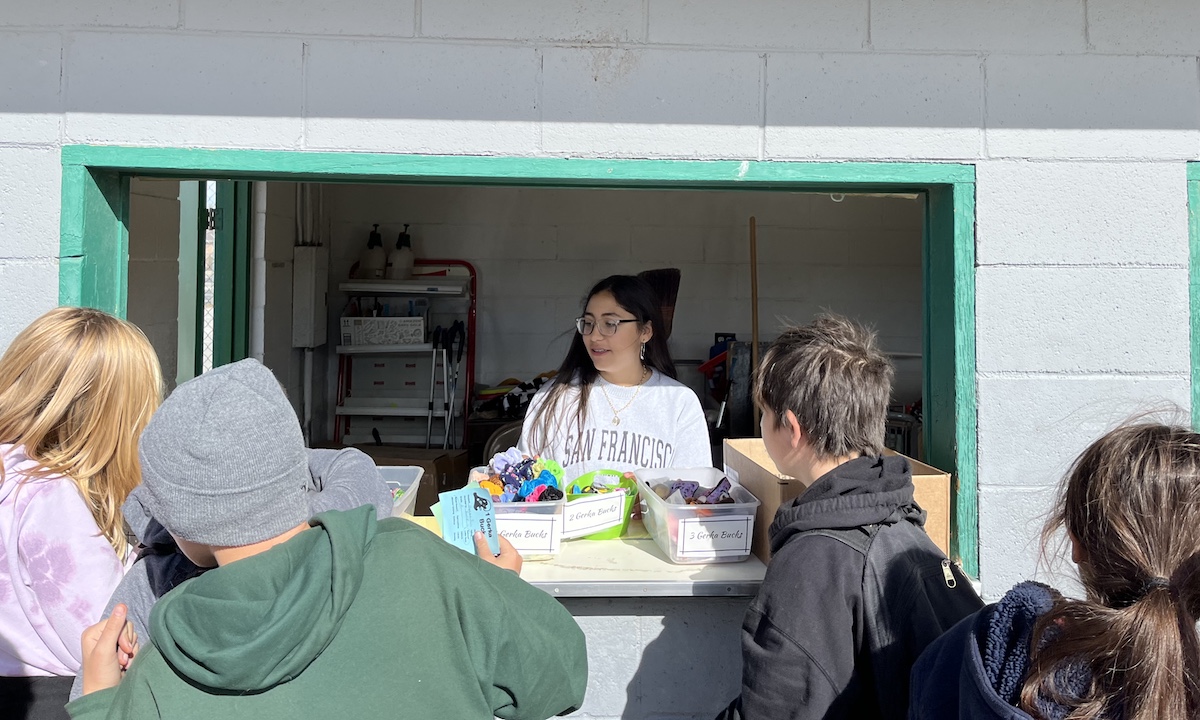 Churchill County Middle School
The Gerka Store is where students can use Gerka Bucks to buy fun items.
“Students earn Gerka Bucks from staff members, for demonstrating our school-wide expectations of mutual respect, attentive listening, appreciation, and kindness,” said teacher Monica Davis.
Students have two months to spend a certain color of Gerka Bucks before they expire. Many students are excited to earn and save their Gerka Bucks for bigger items such as blankets, sports equipment, Bluetooth headphones, speakers, or even extras for their Chromebooks like earphones or a wireless mouse. Students can also purchase a pizza party for four or cookie parties for their advisory class.
“The store is awesome. I am trying to earn as many Gerka Bucks as I can because I want a drone or maybe even a pizza party,” said student Russell Downs.
The store is funded by the Choose Kindness Grant that CCMS was awarded for the 2021-22 and 2022-23 school years. The CCMS Student Council and staff members from the PBIS team run the Gerka store, and it’s open every Friday during lunch for all grade levels. 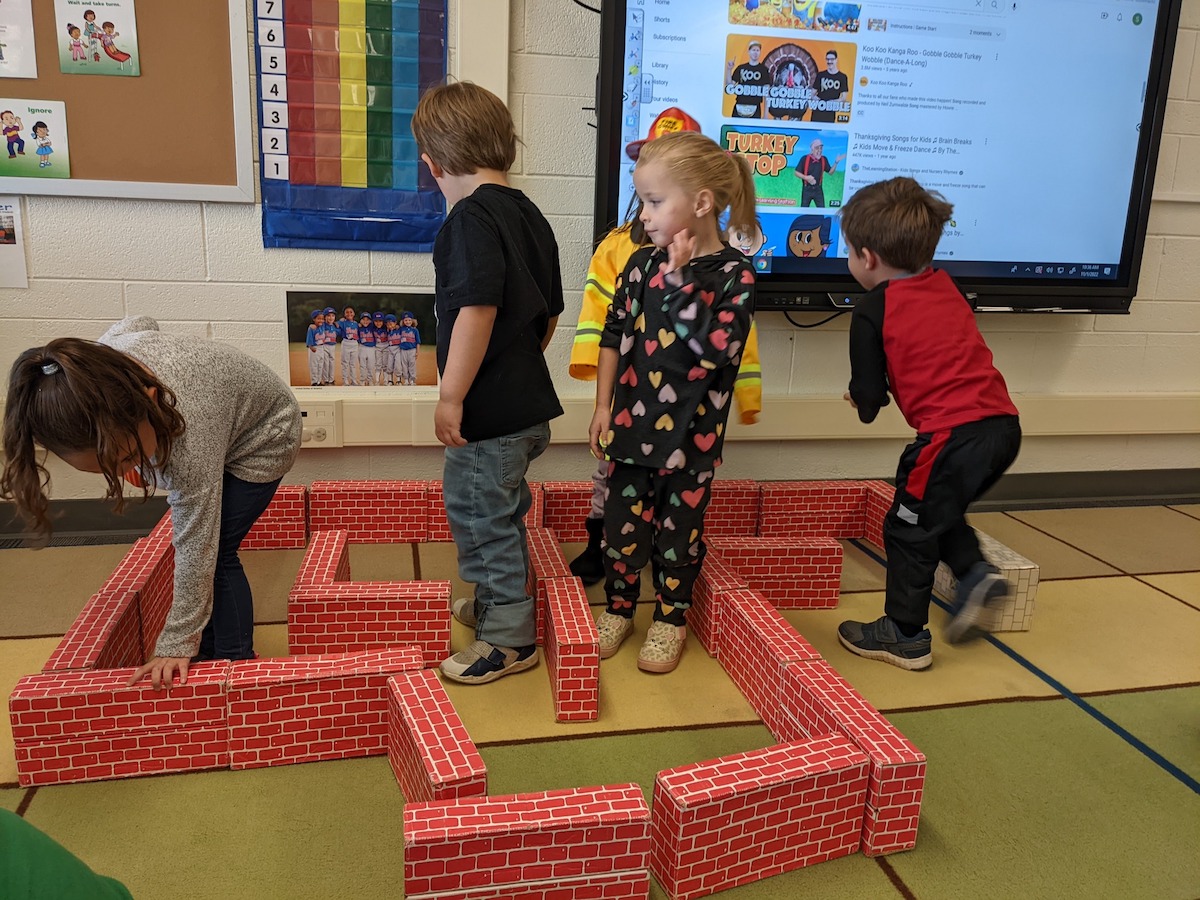 Numa
Fallon Paiute Shoshone Tribal members came to the Fall Festival in honor of Native American Heritage month. Vernon Roger's and Stephen Frank, elders of the FPST, shared their knowledge of Stick Game and songs. Student Keali'i Nioah and his father Jordan Nihoa, both FPST members, shared how Jordan made an arrow from materials he gathered for the Native American display in the library.
Jill Downs set up the FPST Tribal Veterans table, accompanied by Chairwoman Cathi Tuni and FPST member, Margena Dick.
“We cannot thank the tribal members enough for coming out to share their culture and knowledge with our students,” said Principal Shawn Purrell.

E.C. Best
Third-graders wrapped up their forces and motion unit with a catapult launching competition. Teacher Shannon Windriver has done this project for 12 years.
“When I started, my class made huge catapults and launched real mini pumpkins. It was quite an undertaking,” Windriver said.
They’ve since scaled back and students make miniature versions, but the design process is the same. Making catapults demonstrates force and motion in action. Students learn how to adjust the force of their catapults to make them launch further. When something isn't working, students articulate what’s going wrong and figure out what to do to fix it.
It also teaches perseverance. Oftentimes what students think will work doesn’t and adjustments need to be made. This has become a competition between all third-grade classes.
“The catapult that launches the farthest moves to the next round against the winner from another class,” Windriver said.
Students enjoyed this project and liked a little friendly competition with their peers. “My favorite part was winning, but I also liked extending the arm of my catapult and making adjustments,” said student Ryder Shingleton.

Lahontan
Kirby Goetsch has incorporated more play into her Kindergarten classroom while still teaching the expected academic state standards. Recently, students got to play kitchen in their classroom.
“I borrowed a kitchen from Northside and we started by using pots and pans to practice using kitchen materials correctly and taking turns. Now we have turned the kitchen into a bakery,” Goetsch said.
A project funded by DonorsChoose helped Goetsch purchase play food for their classroom kitchen. During centers students learned basic baking vocabulary through a nonfiction read aloud, then practiced their numeral recognition and one-to-one correspondence by rolling a die, reading the number on the die, and making that number of cookies using playdough, cookie cutters and metal cookie sheets.
Students also practiced their speaking and listening skills, and some early literacy skills.
“The goal is for the play kitchen to be an independent center that students can use as a bakery or restaurant to make their own menus and money,” Goetsch said.

Northside
Sandy Wassmuth’s Pre-K class used their skills to build a maze. They have become interested in these seeing circle mazes on their milk cartons.
“Not only are they working cooperatively to design and build it deciding where to add another turn they are also helping guide each other through working on giving and following directions,” Wassmuth said.