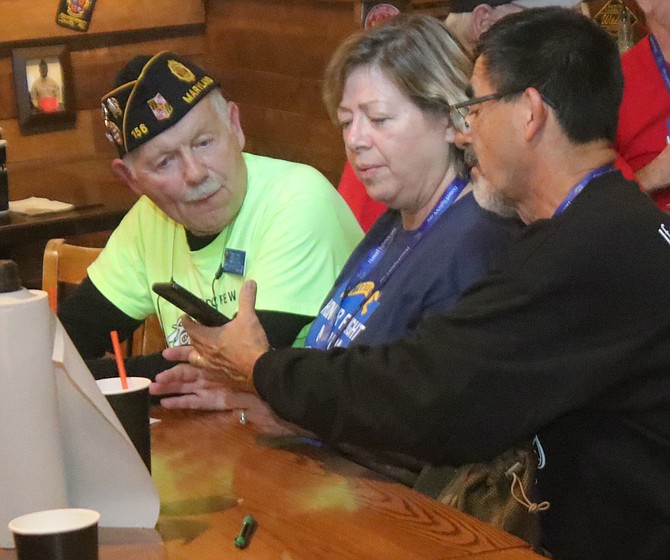 On their recent Honor Flight, Diana (center) and Salvador Pleitez (right) share their story of their son, Benjamin, to a member of the American Legion in Maryland.

The invitation was too good to pass up.

Diana and Salvador Pleitez of Fallon received an invitation to travel on an Honor Flight Nevada trip earlier this month to Washington, D.C. with other Gold Star families and Vietnam War veterans. They felt the camaraderie and talking to like-minded Gold Star families would also be therapeutic for the four-day trip.

Their son’s death more than a decade ago still resonates with the Fallon couple when, on a summer day, in Afghanistan, their 25-year-old son Benjamin was killed near Mazar-e-Sharif, the country’s fourth-largest city that hosted a number of NATO camps.

Diana said a survivors’ outreach representative corresponds with families, and she learned additional seats were available for an Honor Flight to the nation’s capital.

“I had heard about it (Honor Flight),” she said. “My brother is a pilot, and he has flown some Honor Flights. In California, my understanding is they don’t do Gold Star families, just veterans.”

Needless to say, both Diana and Salvador, an engineer with the city of Fernley, were pleased the local Honor Flight included Gold Star families.

Like so many Gold Star families on the latest Honor Flight, the Pleitzes reflected on their son’s life and shared stories. Diana, an elementary school teacher, said the family was surprised when Benjamin wanted to enlist in the California Army National Guard in 2006, the time when deployments were increasing to Iraq and Afghanistan.

“He did his boot camp at Fort Leonard Wood (Missouri), and when he came back, he was extremely ill,” Diana said. “He was rethinking his decision to join the military, but a few months later, he decided he was going full-time and worked with the 184th (infantry regiment) In Modesto.”

In addition to being assigned to the 184th, Benjamin, whose rank was that of a specialist, also belonged to an honor guard that performed services at the San Joaquin National Cemetery in Santa Nella, which is west of Los Banos. During the next six years, Benjamin transferred to the 1401st Engineer Detachment as a vehicle driver and in December 2011, he became a health care specialist. The new career field led him to the 649th Military Police Co., in San Luis Obispo.

“He was a medic. He was an EMT (emergency medical technician),” the Pleitzes said. “He had the privilege to train as a field surgeon. He was told he was the youngest to enter the program. He was asked to be in charge of medics while over there (Afghanistan).”

In March, Benjamin, the middle son of three brothers, deployed to Mazar-e-Sharif, which is 190 miles northwest of the capital city of Kabul, with the California National Guard’s 1072nd Transportation Co., located in Van Nuys. Benjamin’s deployment and willingness to serve in Afghanistan was opposite of his “homebody” lifestyle.

“He didn’t do the sports or stuff like that,” Salvador explained. “He wasn’t athletic … more into lifting weights. He also started running.”

Salvador said his son was in good shape and eating healthier, and Diana remembers how Benjamin always smiled.

“He was very positive, a good practical joker,” she added. “He was social and had lots of friends.”

The cause of Benjamin’s death at Mazar-e-Sharif wasn’t fully released to the Pleitzes. Diana said it took the family eight months to receive any type of report, but it was incomplete. Their frustrations began to develop. The first investigator left Mazar-e-Sharif and another arrived. Still nothing, and the months passed. The anxiety for both Diana and Salvador became overwhelming.

“He was shot on base,” Diana said, pondering if the shooting was accidental.

Diana wasn’t pleased with the delays in receiving an official report.

“I got to the point it (knowing the outcome) won’t bring our son back,” she said.

“I don’t know if it will make any difference,” Salvador added.

When Benjamin’s unit returned to California, Salvador said he and Diana were able to meet with their son’s friends. They heard the stories and what their son was doing at Mazar-e-Sharif. The unit had a military service for Benjamin at the base.

“He was always interested in getting training to his unit,” Salvador pointed out. “He was very instrumental in doing that over there.”

Diana said she’s learned to cope, and her anxiety is not as bad. After Benjamin’s death, however, Diana said it was difficult to function day to day.

“It took years for me not to have a constant, revolving narrative going on in my head,” she said. “It was hard to sleep.”

The Pleitzes found good support from a Northern California chapter of Gold Star families and attended an event in the San Francisco area. Since they relocated to Nevada six years ago and because of the coronavirus pandemic that shut most activities down, Salvador said they have lost that connection.

The Pleitzes left the Turlock area of Central California and first moved to western Nevada where Salvador wanted to open an engineering consultant firm. Trying to open his own business came at the wrong time, so Salvador began searching for an engineering position. The city of Fernley hired Salvador as a senior project manager in the engineering department, and the Pleitzes looked for property to buy.

Their search took them to Fallon.

Diana said the Pleitzes had property in California and wanted to find a plot of land in the Lahontan Valley to train service dogs for veterans. Nothing was available in Fernley. Eventually, they sold their 40-acre spread in California and bought a 5-acre parcel with a house on it west of Fallon.

“This place just fell into our laps,” Diana said.

When they lived in California, Salvador said they had five to seven dog trainers. On one occasion, a member of the California Guard received orders to deploy, and the Pleitzes wanted to take care of the soldiers’ dogs. He said their intent is to relaunch the training in Fallon.

On their third day of their four-day Honor Flight trip, the Pleitzes, along with other travelers, read letters written to them by members of the Reno community, their family and friends. They felt appreciative of the support each letter provided.

“There’s a lot of political stuff going on, and it’s easy to get discouraged,” Diana said. “But there are more people that are kind of quiet in the background. We appreciate their support.”

Salvador said there were days when Diana was discouraged, and he wasn’t. On the other hand, he remembers going through discouragement, and his wife wasn’t.

“We were able to navigate through these rough waters,” he said.

Diana said when Salvador and she meet people, some will apologize about their son's death. Diana, though, discounts that feeling.

“I would say people want their loved ones to be remembered,” she said.