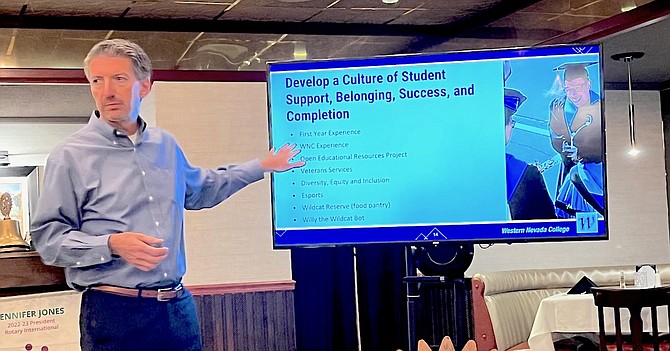 The interim president of Western Nevada College recently gave an overview to the Rotary Club of Fallon of the goals and challenges facing the educational institution.

Dr. J. Kyle Dalpe was tabbed as interim president after Dr. Vincent Solis resigned Dec. 31, 2021. He first served as the college’s provost and Vice President of Finance. Before coming to WNC, Dalpe spent 16 years at Truckee Meadows Community College, where he served as acting president, director of Institutional Advancement, associate dean and chief of staff in the President’s Office and dean of the Technical Sciences Division. He also served as the interim executive director of Legislative Affairs for the Nevada System of Higher Education for the 2019 legislative session.

Dalpe said the major goal for the college is focusing on academics, but he said visibility for WNC, including the Fallon campus, is also important. He also said WNC’s enrollment didn’t drop during the coronavirus pandemic.

The institution objectives were developed for the years 2019-2025. He listed the five items as: access to educational pathways; success for student learning and completion; close the achievement gap in an environment of equity and inclusion; respond to industry needs with workforce development and research.

Most of this presentation centered on the WNC programs. For example, he said WNC’s annual operating budget for both the Carson City and Fallon campuses is shy of $20 million, which includes $14 million from state appropriation and the rest from registration fees.

Overall, Dalpe said WNC serves almost 5,000 students annually. The oldest group served are students from 18-24; they comprise 35% of the enrollment. The under-18 group that primarily includes high school students enrolled in the Jump Start program, weighs in at 26%. A dual enrollment program allows high-school students to complete both their state requirements as well as obtaining a two-year degree from WNC.

As for the populations served, Dalpe pointed out 33% of students are enrolled only in online classes, and the Jump Start is at 27%. Dalpe added veterans consist of 2% of the enrollment.

Dalpe turned his attention to the Fallon campus, pointing out 278 high school students are enrolled. Of that, the dual-enrollment program consists of 144 students from Oasis Academy and 121 students from Churchill County High School.

On the other side of the spectrum, 190 non-high school students are taking classes at the Fallon campus. According to Dalpe, 87 students are seeking a liberal arts degree, and 88 are working toward a professional tech or NALH degree or certification. Fifteen are non-degree seeking students.

Dalpe said he would like to look at rural expansion with programs such as CNA (certified nursing assistant). He said the college is looking at $2.7 million to help rebuild the lab for the CNA program.

“I would like to double the CNA program, but I’d like to get the lab built first,” he said.

The CDL (commercial driver’s license) program started in Fallon and WNC has several simulators to aid with the instruction.