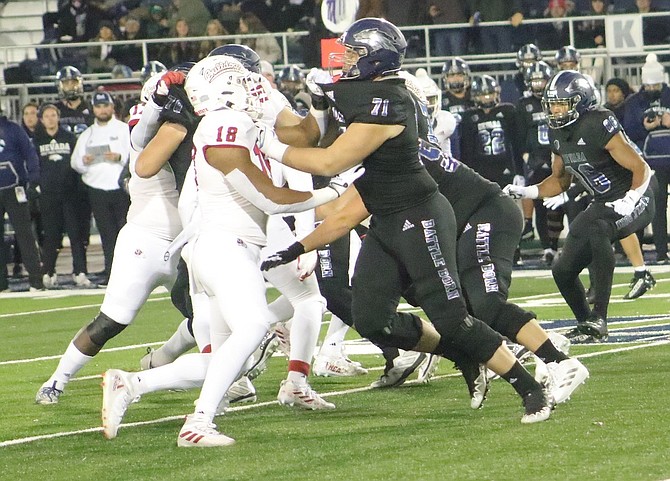 Nevada and Fresno State played in front of an announced crowd of 12,501 Saturday night at Mackay Stadium.
Photo by Steve Ranson.

Ken Wilson is now facing one of the most difficult tasks ever presented to a Nevada Wolf Pack head coach. The 58-year-old rookie head coach not only has to rebuild his football team on the field this offseason. He also has to rebuild the community’s faith and trust in his once-proud program.

As things stand now, the connection between his program and its fan base is about as strong and reliable as a cell phone internet connection on a deserted island in the middle of the Pacific during a monsoon. The average crowd this year at Mackay Stadium, the House That Chris Ault Built, was 14,905 for the six-game home schedule. It is the school’s lowest average attendance since it moved to Division I-A (FBS) for the 1992 season. The 1992 team, excited about its initial taste of big-boy football, by the way, averaged 22,022 fans a game. Thirty years later, heading into the 2022 season, that excitement is now an urban legend. This year’s attendance is the lowest average attendance at Mackay since the 1989 season, when just 14,248 a game showed up for seven home games.

So, yes, this is how far the Pack has fallen after one season of the Ken Wilson era. It is now 1989 all over again. So turn on your radio and listen to Milli Vanilli, Fine Young Cannibals and 10,000 Maniacs, which is only slightly fewer maniacs that showed up at Mackay this season for a home game. You don’t also get the 99-cents-a-gallon gas of 1989 or the seven Wolf Pack victories that year, but all the rest is the same. That 1989 season, by the way, was Wilson’s first as a Pack assistant. Is this what he meant by restoring the program back to the traditional values of when he first got to Reno?

The biggest home crowd this year was just 18,255 for Colorado State, likely inflated merely by an opportunity to boo Norvell. Four of the six home games this year attracted less than 15,000, including both Boise State (14,960) and Fresno State (12,501). There were years when it seemed Boise State used to bring that many of its own fans to Mackay. The Boise State game, which used to regularly bring 25,000-plus to Mackay, produced the lowest attendance in the rivalry at Mackay since 1985 (13,460). The Fresno State crowd is the lowest at Mackay for any game since 2011 (Idaho, 10,027). All of these attendance figures, of course, do not count the 2020 COVID-19 season when just a handful of fans were allowed into the stadium. But don’t blame what happened this year to the lingering effects of COVID. The Pack averaged 21,575 a game last year, when four of the six games exceeded 20,000.

There was a time not too long ago when a football game up on North Virginia Street was the place to be and not avoid. From 2012 through the middle of the 2016 season, the last year of Ault as head coach and the first three-and-a-half years for Brian Polian, no less than 23 of 27 home games attracted a crowd of at least 20,000. Three of the four that fell short were over 19,000. The downfall in attendance started with the final three games of Polian’s head coaching career at Nevada in 2016. Starting with those three games, the Pack has had crowds of 20,000 at Mackay for just seven of its last 33 home games (not including 2020). So Wilson didn’t start the decline in attendance. But he certainly didn’t reverse the trend

We are actually looking at a two-decade decline in Wolf Pack football attendance. Adding lights to the stadium in 2003 gave attendance a little jump (4-of-6 crowds that year were over 20,000) but that thrill wore off quickly. Even the exciting Colin Kaepernick era (2007-2010) did little to boost attendance. Just nine of Kaepernick’s 25 home games went over 20,000 in attendance. The week before the greatest game in the program’s history attracted 30,712 for Boise State in 2010, don’t forget, just 10,906 showed up to watch a 46-point win over New Mexico State.

The heyday, as far as the program’s popularity, interest and attendance are concerned, was clearly the 1990s, starting when the program jumped to the exciting (or so we thought) world of FBS football in 1992. The Pack had crowds of 20,000 or more for 35-of-47 home games from 1992 through 1999.

The reasons for the Wolf Pack’s stale attendance figures the last 20-plus seasons are many. The Chris Tormey era (2000-03) was a punch to the program’s gut. And even when Ault returned to the sideline from 2004-12 the community wasn’t all that motivated to buy tickets. Putting almost all of the home games on television, a practice that has turned head coaches into millionaires but fans into couch potatoes, has also put a very clear ceiling on Pack attendance. Rising ticket prices compared to the 1990s also hasn’t helped, and the stark reality that the Pack is not even an afterthought in the world of the Power Five-dominated FBS also has stifled enthusiasm.

The Wilson hire, done quicker than Kaepernick used to turn the corner and score from 50 yards out, excited nobody in the community except the aging alumni who played for him from 1989-2012. Wilson, after all, restored their connection to the program that was lost during the nine years of Polian and Norvell. The rest of the community, though, is still disconnected.

The Wolf Pack football program, in many respects, is now at its lowest point on the field and off it since the final year of the Jerry Scattini era in 1975. Scattini’s Pack lost 14 of its last 20 games dating back to early in the 1974 season. And, like Wilson’s Pack team this year, he bored the Pack fan base to tears.

His 1975 team scored a grand total of 121 points all season over 11 games, just 23 over his final four games. Ault revitalized the program in the community and on the field starting in 1976. But now it feels like the Pack is starting over once again. Fan interest, judging by the attendance, is at its lowest in roughly five decades. Pack fans filled only about half the stadium for games this year. But even those numbers were obviously inflated. In reality the stadium was only about one-third full most of the year. By the end of some games, it felt like there were more people on the Pack sideline than in the stands. Forget 1989, it is 1975 all over again up on North Virginia Street.

Wilson knows as well as anyone that the rebuilding process within the community will be greatly enhanced if the Pack goes down to Las Vegas this Saturday and beats UNLV. Bringing back home a blue Fremont Cannon will save this demoralizing season in many ways. A victory over UNLV (as opposed to a loss to UNLV and a losing streak that will reach 10 heading into 2023) will do wonders for the program and the community.

It will restore some confidence in the program by the community because, of course, for many in Northern Nevada the UNLV game is the only one all season that truly matters. It clearly is the only one that matters now. When you are 2-9 overall and 0-7 in the Mountain West and riding a nine-game losing streak, after all, it’s all that is left. Nobody wants a 2-10, 0-8 season and a 10-game losing streak hanging over the program for the next nine months. How many season tickets do you think the Wolf Pack athletic department will sell if the season ends with a 10-game losing streak and a loss to UNLV? If it sells any (it will likely lose a bunch of season-ticket holders) they will likely be purchased by Wilson, a guy who will earn the largest single-season salary ($1 million) for a Pack head coach in history and produced one of the worst seasons in the program’s history.