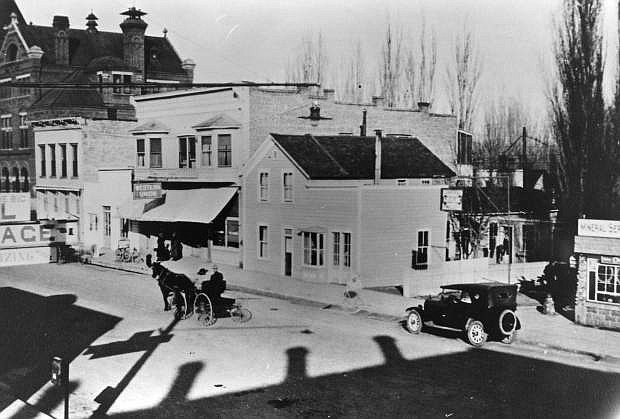 Janitorship for new school: Mr. Howe was asked as to what the children would be required to do to keep the schoolhouse in order. His response was that a proper person has been employed to make the fires and sweep the halls. Each teacher will have her own room swept by her respective pupils. This task will be very light as the desks are easily turned upward out of the way of the broom.

In brief: The Tribune calls for the enforcement of the law against stovepipes protruding through the roof. It will pay persons with poor teeth to call at Dr. Greenlaw’s office. No one needs to have a lot of black fangs…

All sorts: Three hundred Paiutes are on a big rabbit hunt in Mason Valley.

Don’t forget the chicken and turkey shoot at Col. Wiggins place in Empire.

Suffragettes meet: The Ormsby County Branch of the Woman’s Suffrage League held a meeting at the home of Mrs. J.E. Bray.

Dairy products to be rationed: A nationwide milk conservation program built around stringent butter and cheese rationing to civilians will be inaugurated. There will be tight federal control over all milk products, with the exception of fluid milk.

Advertisement: “Thanksgiving Family Buffet. Carson City Nugget. $6.95 Adults, Children 10 and under, 20 cents per year. Served in Comstock Room. Roast turkey or baked ham. Both carved by the chef with all the trimmings. Sirloin-tip with rice, golden fried cod. Fruits. Salads.”

Presbyterian party: The sociable passed off pleasantly and resulted in the realization of a very handsome sum for the Church treasury.

Advertising dispute: The Carson Opera House Association decided to place their advertising in two papers, the Appeal and the Tribune, one is a morning paper and the other an afternoon paper. The theatrical companies object to patronizing so many papers in so small a town because it was simply throwing money away.

Regarding turkeys: Turkey selection is a hard thing to accomplish. There are numberless rules regarding turkeys, relative to the rigidity of the breastbone, the color of the comb, the way the claws look and the sharpness of the bill. But be careful of the turkey sharp. All the rules go by the board when you fall into the hands of the turkey sharp.

Part 1 – Made Nevada history: Mrs. Rebekah Ambrose, the first woman settler of Empire (a town along the Carson River, a few miles east of Carson) and the first white woman to settle on the Comstock, passed away surrounded by her sons and daughters. She crossed the plains with an emigrant train to Virginia City. She and her husband came up from Johnstown in 1857 and settled in Virginia City. They opened a small tent restaurant, and she did the cooking. She was recognized as the first white woman to settle on what proved to be the richest silver lode in the world. She and her husband moved down on the Carson River and started “Nick’s Station,” now Empire. Their first child was born in 1858. The first boarding house on the river went up, and land was homesteaded that is still in her name (continued Friday).

Photo caption: Volunteer Ruth Breswell puts together a bag of food at the FISH facility complete with a turkey and rolls. Many needy families in the area are taking advantage of the FISH program which provides food to the needy all year round.

Hope deferred: The Emmet Guard are about to be armed with Springfield breech loading rifles, eighty of them.

In brief: Sweeney’s saloon has an exhibition of fish brought alive from India, whose fins are twice the size of its body and covered with designs which make it look as if dressed in some of Cohn’s new curtain goods.

Part 2 – Made Nevada history: During the early days when the Indians were giving trouble, Mrs. Ambrose and her two small children were compelled to leave the station. She mounted a horse and went to Genoa for assistance, leaving her husband at the station. After she arrived at the settlement, assistance went to Mr. Ambrose who was doing the fighting. He killed one Indian and others left when the whites from Genoa arrived (continued Saturday).

Mysteries of Black Rock Desert: Researchers have found the remains of at least three massive prehistoric mammoths, as well as a large predator that may be a saber tooth tiger. The area was a resting place for three to five mammoths, a young calf, and a mature individual with impressive tusks as well as other kinds of animals.

Sue Ballew is the daughter of Bill Dolan, who wrote this column for the Nevada Appeal from 1947 until his death in 2006.