Walt Defensive Player of the Year

Seven others join the Carson senior with all-region honors 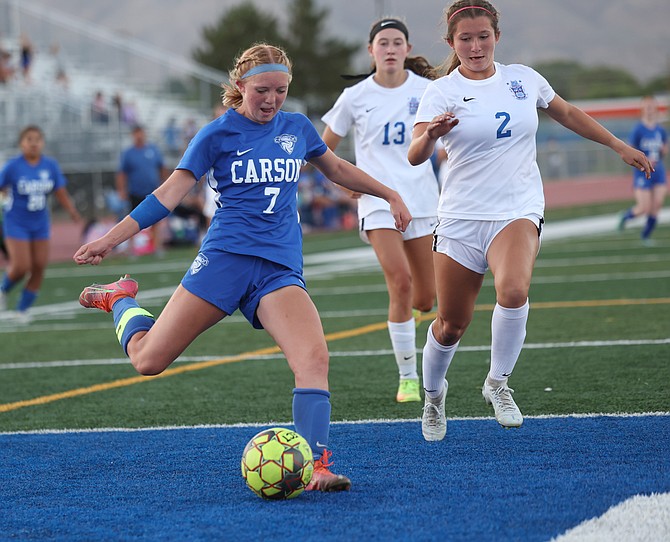 Carson’s Gracie Walt dribbles out of pressure against Spanish Springs earlier this season. Walt earned Defensive Player of the Year for her performance on the pitch this fall, helping the Senators earn a home playoff game for the first time since 2016.
Photo by Jeff Mulvihill, Jr. | InstaImage.

At the top of the list was Carson senior Gracie Walt, who earned Defensive Player of the Year.

Walt spent a majority of her time playing in the midfield, but her defensive skills and ability were obvious no matter where she was on the field.

The Senator senior’s pace was one of her strongest attributes on the field and was consistently able to move the ball out of the back and start the Carson offense.

Walt tallied six assists as well on the season.

Morgan put together the second highest goal total on the season for the Senators with seven and dished out two assists.

Over a five-game span, from September 22 through October 4, Morgan scored four goals and had an assist with the Senators winning three of those five contests.

Junior Aleeah Weaver and senior captain Kylee Lash both were selected to the first team all-region team at forward and midfield, respectively.

Weaver, who was a second team selection in 2021, was one of the top goal scorers in the North finishing tied for third in the Class 5A North with 17.

The forward had four multi-goal games, including two contests with hat tricks in wins over Spanish Springs and Bishop Manogue.

She was third outright in points (42) when factoring in Weaver’s eight assists over the course of the season.

Of the Tigers’ 22 games this season, Weaver tallied a point in 14 of them.

Lash made her second appearance on the all-region first team squad as a defender.

After a first team nod last fall, the standout defender continued to prove why she is one of the best in Northern Nevada in the back.

Lash was second on the team in assists with nine and her lone goal of the season advanced Douglas to the regional semifinals on a free kick from at least 35 yards out.

The senior served as the Tigers’ free kick specialist all season and took corners for Douglas as well.

Seara MacPherson was the third Douglas player to earn an all-region spot, getting selected to the second team in the midfield.

MacPherson led the Tigers in assists this season with 10 and added four goals for a total of 18 points this fall.

The senior had a goal or an assist in seven of last nine games of the regular season, including the final six contests, helping Douglas earn the last postseason spot.

Leading the way was senior forward Alyssa Tomita, who scored a team-high 10 goals.

Her double-digit goal total was good for ninth most in the Class 5A North.

The Senators were 7-2 this past fall in games in which Tomita was able to find the back of the net.

Manriquez picked up the selection in the midfield where she posted a goal and an assist for the Senators.

The midfielder was also a large part in the Senators allowing the second fewest goals around the region this season.

Quintero was another instrumental part in Carson’s backline, earning an honorable mention nod in her sophomore season.

The defensive specialist continuously caught praise from her teammates for her ability to turn attacking opponents away.