Pack grades: One play keeps the cannon from staying blue 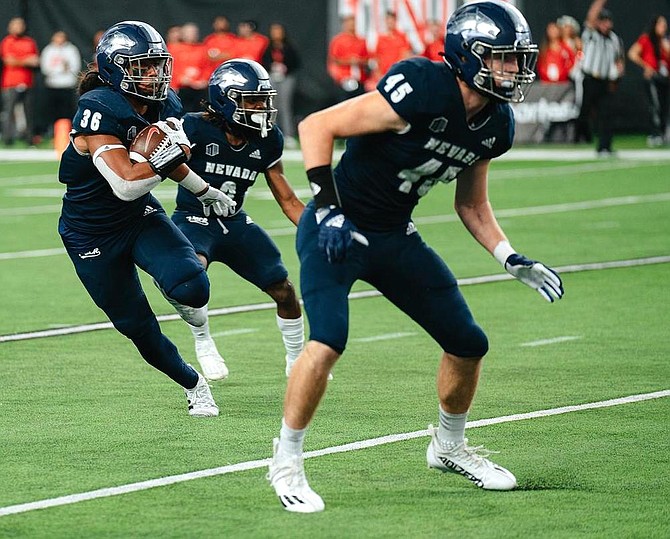 Grading the Nevada Wolf Pack’s 27-22 loss to the UNLV Rebels on Saturday at Allegiant Stadium in Las Vegas:

Nate Cox saved his best for last. Cox, playing his last college game, completed a career-high 27-of-44 passes and almost led the Pack to a dramatic comeback victory on the road at UNLV. His 276 yards against the Rebels are the second-most in his career (302 against Incarnate Word in September). But the most important jobs for a quarterback are to get his team into the end zone and to protect the ball. Cox was intercepted twice and made a bad pitch for a fumble that led to a 55-yard scoop-and-score for UNLV. He also had to settle for three field goals, two from inside the UNLV 10-yard line. The Pack’s three drives that resulted in field goals started at the UNLV 17-, 37- and 31-yard lines.

But when Cox wasn’t gifting the ball to UNLV or leaving points on the table he was, maybe for the first time in his Wolf Pack career, the best quarterback on the field. The 6-foot-9 senior from Lafayette, La., spread the ball around like the experienced veteran the Pack media guide says he is, targeting six receivers at least four times each. His 75-yard touchdown to a streaking B.J. Casteel in the first quarter for a 13-0 lead was a work of art. Carson Strong and Romeo Doubs would have been proud. Cox also ran the ball effectively 11 times for 30 yards (five carries each netted 5-7 yards). Cox nearly left the field a hero in the Fremont Cannon game, leading the Pack 75 yards on 11 plays for a touchdown to cut the deficit to 27-22 with 2:28 to play. On the next drive he moved the Pack to the UNLV 6 on second down but three passes resulted in a 1-yard gain and two incompletions. Almost all of the Pack offense under Cox, though, came in the first and fourth quarters. In the middle two quarters Cox was just 10-of-18 for 65 yards combined as the Pack had to settle for six punts, an interception and a field goal on eight drives. The Pack had just 70 total yards combined on those eight drives as UNLV turned a 13-0 Pack lead into a 27-16 Rebel lead.

That was the Toa Taua the Wolf Pack needed all season long. The fifth-year senior had one of the best games of his five-year career, gaining 144 yards on 29 carries and also catching six passes for 16 yards. He was the best offensive player on the field by far. Taua gained at least 1 yard on 27 of his 29 carries and four or more on 14 carries. It was Taua’s 1-yard touchdown late in the fourth quarter that made a come-from-behind victory a possibility. Taua caught six of the eight passes thrown his way. Taua turned in the Wolf Pack’s best rushing performance against UNLV since James Butler had 196 yards and three touchdowns in 2016. It was also, without question, Taua’s best career performance in his five games against UNLV. In his previous four Fremont Cannon games, Taua had 176 yards on 46 carries, never exceeding 86 yards (2020) in a game. Taua’s 144 yards against UNLV is his most yards in any game since he had 160 against San Jose State in 2019. His career high is 170 against Toledo in the fourth game of his freshman year in 2018. Taua finishes with 14 career 100-yard games. His 911 yards, 11 touchdowns and 217 carries this year (his only season not in coach Jay Norvell’s Air Raid) are all career highs.

Dalevon Campbell had a game-high nine catches (on 11 targets) for 71 yards. Casteel’s 75-yard touchdown was the Pack offensive highlight of the game but all of his five catches came in the first half (90 yards). Spencer Curtis had three catches for 62 yards (two of 28 and 23 yards). Jamaal Bell caught just two of the eight passes thrown his way so it was a bit strange that the Pack’s last two passes of the game from the 5-yard line that fell incomplete were toward Bell.

It certainly wasn’t perfect, but we also saw the best of the Pack’s offensive line. So it shouldn’t be a shock that we also saw the best of Cox and Taua. The Wolf Pack ran the ball 41 times for 182 yards, an average of 4.4 a carry. Cox was sacked three times on the 47 times he looked to pass but it was only for total losses of five yards. Yes, on one of Cox’s two interceptions he was running for his life to get away from pressure. But, for the most part, the Pack pocket was clean and there were plenty of holes to run through for Taua. UNLV didn’t have an official quarterback hurry. The Pack offense had 86 plays and just five ended behind the line of scrimmage.

UNLV couldn’t run the ball, gaining just 69 yards on 28 carries, an average of 2.5 a carry. Dom Peterson had assists on tackles of Rebel running back Aidan Robbins for a loss of one yard and no gain. Peterson also had one of the Pack’s five sacks. Dion Washington was in on two tackles of Robbins and also had a sack. William Green was in on a tackle that stopped Robbins for a loss of one. James Hansen dropped Robbins after a gain of just two.

Naki Mateialona must have slept with a picture of UNLV running back Aidan Robbins under his pillow last week. Everywhere Robbins went, it seemed, Mateialona followed. The Pack linebacker finished with a team-high nine tackles, with six of them coming on Robbins. Mateialona also had a sack for his best performance of the season. Elijah Winston also played well with five tackles and a sack. He also teamed with fellow linebacker Davion Blackwell to stuff Robbins for a 5-yard loss in the third quarter. Drue Watts had four tackles and had his first career interception. UNLV starting quarterback Doug Brumfield going out of the game in the first quarter with a back injury made things extremely simple for the Pack defense. But this was as well as the Pack defensive line and linebackers have played in the same game all season long.

UNLV quarterbacks Doug Brumfield (0-for-2) and Harrison Bailey (16-of-27) only completed 16 passes the entire game for 209 yards. The Pack secondary also did its job with commendable coverage on the two Rebel touchdown passes of 49 and 30 yards. It was difficult to see whether UNLV’s Kyle Williams or the Pack defensive back caught the ball on Williams’ 30-yard score in the fourth quarter. Bentlee Sanders had seven tackles, though five were on Robbins runs totaling 56 yards. Tyriq Mack was also instrumental in keeping Robbins in check with four tackles on the Rebel back, six overall. Isaiah Essissima knocked away two passes and Tyson Williams sacked Brumfield on UNLV’s second play of the game.

It’s been rare when the Pack special teams had a positive impact on a game this season. But this was one of those rare occurrences. Marquese Allen-Patmon blocked a UNLV punt on the first drive of the game and recovered the ball at the UNLV 17-yard line. Bentlee Sanders returned a Rebel punt 34 yards to the UNLV 37 later in the first quarter to set up Brandon Talton’s second field goal. Talton had three field goals (without a miss) from 25, 26 and 40 yards out. Four Matthew Killam kickoffs were touchbacks and another was returned just 17 yards. Matt Freem averaged 42.3 yards on his six punts, all in the first three quarters. One punt, though, went just 39 yards to the UNLV 41 and another was 41 yards to the Rebel 30. His best punt was 42 yards that resulted in a fair catch at the Rebel 8-yard line.

The Wolf Pack dominated almost the entire first quarter on offense, defense and special teams, building a 13-0 lead. If the lead would have somehow reached 20-0, the cannon would likely be blue this morning. The Pack was ready to play at the start and kept its intensity for the entire game, right up to the final play. Yes, the Fremont Cannon was a huge incentive and likely did the bulk of the coaching in this game just with its presence. But give Wilson and his staff credit for keeping a team on what would be a season ending 10-game losing streak motivated to play the entire 60 minutes. It was one of the few times we’ve seen that all season.

There is a minus after the grade above because of one unforgivable play call. But it was a call that is the biggest reason why the Fremont Cannon is painted red right now. The Pack basically lost this game on a ridiculous, silly and we’re-thinking-way-too-much call at the end of the first quarter that changed the entire game. Facing a 4th-and-1 at the UNLV 45 with a 13-0 lead on the final play of the first quarter, the Pack got way too cute for its own good. They had Cox fake a handoff up the middle to Taua and then pitch the ball to the left to Casteel, who came from the right side. The pitch was behind Casteel, the ball ended up on the ground, and UNLV’s Johnathan Baldwin picked it up and carried it to the end zone. Even if Casteel caught the pitch he likely would have lost five yards.

Take away that goofy, careless and needless play and the Pack probably wins this game. UNLV had done absolutely nothing positive in the game to that point, was trailing 13-0 and had its backup quarterback in the game. But Wilson and his staff decided to show off, stealing a page from the first few years of the How-to-throw-away-a-game playbook of Jay Norvell and Matt Mumme. There were about a dozen safer, more efficient and less dangerous plays the Pack could have called in that situation. UNLV should send Wilson a Christmas card next month with a picture of the red Fremont Cannon on the front. But give the Pack credit for making Cox look like a legitimate starting quarterback this year before the season ended and also allowing Taua to finally put this team on his back.

How, exactly, did the Wolf Pack lose this game? UNLV likely doesn’t even know the answer to that question. The Wolf Pack dominated the game. This was the type of effort we expected out of Wilson and his team all season long. The Pack played better on Saturday in all three phases of the game than it did in its two victories against awful New Mexico State and Texas State three months ago. The Wolf Pack simply owned the football (when Cox wasn’t giving it away, that is) for the entire game. The Pack had 29 more plays and held the ball for nearly 14 more minutes. The Pack offense had 10 more first downs than the UNLV offense. The Pack offense had just as many touchdowns as UNLV (two each) and more field goals (3-2). Still don’t think that unthinkable, what-the-heck-are-they-doing? Pack play call on 4th-and-1 that resulted in seven UNLV points is the biggest reason the cannon is red this morning? The Rebels owe the Wolf Pack a Christmas gift.