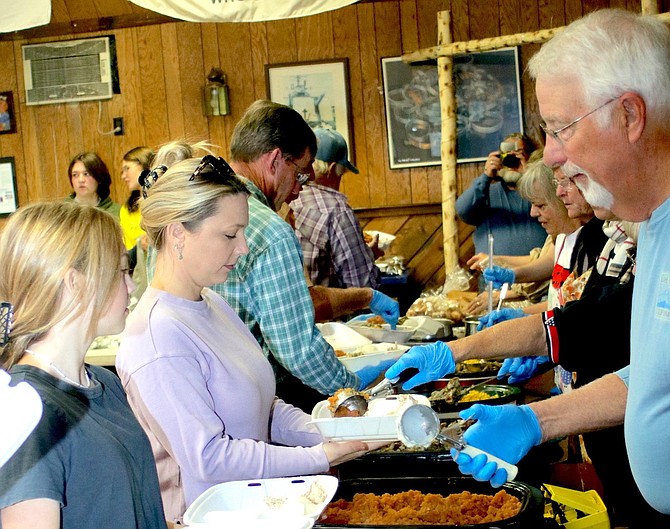 A blend of the newest mixed with the more experienced volunteers has one thing in common: Make Thanksgiving and Christmas meaningful days for Churchill County’s senior citizens.

American Legion Post 16, which oversees the preparation of food and delivery of both Thanksgiving and Christmas dinners around the Lahontan Valley, has become a recognizable part of the holidays.

Both civilian and military volunteers also help the William N. Pennington Life Center twice a year by delivering meals to the county’s elderly population whether they live nine miles south of Fallon or to the east past Harmon Junction or west toward Leetville Junction.

“We try to get the word out to the community,” said Paul “Pip” Valentin, coordinator of the holiday meals program for the post.

Valentin, who began cooking meals last year, took over the program from Lance McNeil, who retired from the holiday outreach after more than two decades of organizing volunteers and meals.

Now, the task falls on the 40-year-old Valentin, a veteran of the U.S. Marine Corps.

For the next two hours on Thanksgiving morning, more than 50 volunteers streamed into the post from both the Fallon community and Naval Air Station Fallon. Volunteers, which also included retired military from the different branches of service, lined up and then walked past servers who dished up turkey, vegetables, mashed potatoes, rolls and dessert. The volunteers repeated the process like a well-oiled machine until all Styrofoam containers were filled and finished for delivery.

Every Thanksgiving and Christmas, Valentin said residents and the military personnel enjoy helping the seniors as evidenced by more than three dozen volunteers who stood ready to package and then deliver the food. Valentin said he conferred with McNeil on several occasions to ensure the program had enough drivers to deliver the meals.

“Pip has a way of getting us here,” said Lucy Carnahan, executive director the Fallon Chamber of Commerce.

“I like volunteering,” she said. “I’ll volunteer anywhere, any time.”

HN Joseph White, whose rate is that of a hospital corpsman, was surprised by the number of volunteers. The Naval Air Station Fallon sailor had only arrived to his first duty station two days prior to Thanksgiving after completing his A School. As he waited in line to fill a container with food, White said he wanted to become involved with the community.

Retired Fallon businessman Roger Diedrichsen, who formerly owned the Pizza Barn, decided to volunteer as a driver this year. His daughter, Michelle, has been a volunteer for several years.

“It’s something special to give back,” Roger Diedrichsen said, as he waited for to pick up his delivery list.

After a year of helping different organizations in town, Roger Diedrichsen said he still wants to help others and delivering Thanksgiving meals is being helpful.

This year, Valentin said the program divided the deliveries into 17 routes. He said routes within the city had more meals to deliver because of the shorter distances, while the county routes, which required more driving time, had fewer meals for volunteers to give to their seniors.

“It’s all about what we can do for the community,” Valentin said.