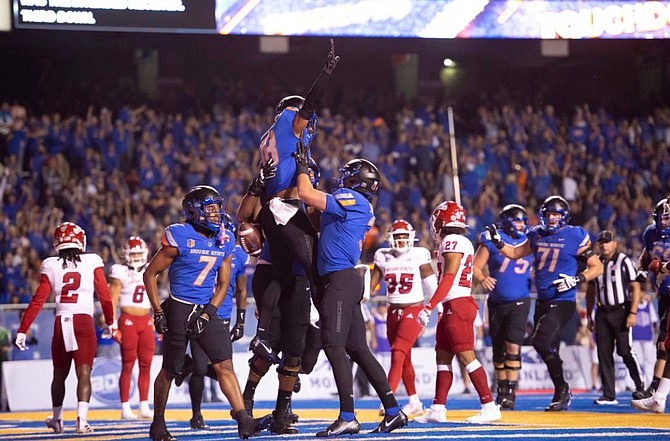 There is little question that the top two football teams in the Mountain West will decide the league’s championship.

Mountain Division champion Boise State and West Division champion Fresno State, the No. 1 and No. 2 teams in the Nevada Appeal Mountain West rankings, will meet in the conference championship game Saturday afternoon (1 p.m.) at Albertsons Stadium on Boise’s blue turf.

“We earned the right to play for the championship,” said Boise State coach Andy Avalos, whose Broncos beat Utah State, 42-23, last Friday to close out the regular season. “You know, you go through a lot of different stuff for a reason. Our group has been resilient. We have grown forward through everything. We’ll be able to draw from that stuff as we prepare for our next challenge.”

“It was a challenge having already accomplished something like the championship game to keep our focus and play a team like Wyoming,” Fresno State coach Jeff Tedford said after the win over the Cowboys.

“Our next opportunity (against Fresno State) requires us to be at our very best,” said Avalos, who was named the conference’s coach of the year on Monday.

“Fresno State and we are very different teams since the last time we met (in October).”

Boise State led No. 7 Utah State 28-23 after an 8-yard touchdown run by the Aggies’ Calvin Tyler with just under eight minutes to play. Boise State quarterback Taylen Green, the league’s freshman of the year, then put the game away with a 91-yard touchdown run with 69 seconds left. The Broncos’ Seyi Oladipo also returned an interception for a touchdown 38 seconds later to turn the game into a rout.

Fresno State, on the other hand, clearly dominated No. 6 Wyoming (7-5, 5-3). Running back Jordan Mims scored three touchdowns and quarterback Jake Haener was 21-of-32 for 183 yards and a touchdown. The Bulldogs’ defense held Wyoming to 191 yards.

“The defense got the win for us,” said Haener, who has passed for 1,578 yards and 13 touchdowns over his last four games. “They made the plays.”

Wyoming lost its last two games of the regular season to Boise State (20-17) and Fresno State, the two teams that will meet for the league title this weekend.

“It was a rough night for us,“ Wyoming coach Craig Bohl said after the one-sided loss to Fresno State. “But we’ll learn from this.“

Wyoming running back Titus Swen rushed for 75 yards and became just the 12th player in Cowboys history to surpass 1,000 yards (1,039) in a season. Swen, who has 2,161 yards and 16 touchdowns in his 33-game Wyoming career, was kicked off the team on Monday for “personal conduct that was below the standard necessary to be a member of the Cowboys’ football program,” Bohl said.

“The first drive of the game on their touchdown, it ticked me off,” San Diego State coach Brady Hoke said. “But from that point on defensively we did a nice job. But offensively we never got anything going.”

San Diego State’s offense had minus-1 yard rushing on 15 carries and just eight first downs and 187 yards overall. The Aztecs were 0-for-10 on third down and had the ball for just 21-plus minutes.

“I was talking to Troy (Calhoun, Air Force’s head coach) and he agreed that this is probably the best defense they’ve ever had,” Hoke said. “They were certainly better than what I saw on film.”

San Diego State, though, accepted an invitation on Sunday to play in this year’s Hawaii Bowl on Dec. 24 against Middle Tennessee State.

“I don’t know if we took a step back this year,” Hoke said. “But the thing I don’t like is the discipline. We had too many penalties this year. The things like the false stats, that drives me crazy.”

“Elijah Cooks was such a great addition to our team,” San Jose State coach Brent Brennan said. “He’s played a ton of college football so he’s hyper competitive. And so is Chevan. The two are roommates so it’s natural for them to have a great connection.”

No. 8 UNLV (5-7, 3-5) ended a six-game winning streak by holding off No. 11 Nevada, 27-22, in Las Vegas. The Rebels rallied from a 13-0 first-quarter deficit to win the rivalry’s Fremont Cannon trophy for the third time in the last five years and fifth time in the last 10 years.

Rebel backup quarterback Harrison Bailey came in for injured starter Doug Brumfield late in the first quarter and engineered the comeback win, throwing for 209 yards and two touchdowns. UNLV defensive back Johnathan Baldwin returned a fumble 55 yards for a touchdown on the final play of the first quarter to start the Rebels’ comeback. He also had an interception and knocked away Nevada’s final pass of the game from the UNLV 5-yard line to secure the win.

“The confidence grew as the game went on,” said Bailey, who transferred to UNLV from Tennessee.

“That (UNLV) locker room is on fire right now,” said Arroyo at Allegiant Stadium on Saturday. “It’s an awesome place to be.”

It would be Arroyo’s last UNLV locker room, since the Rebels fired the third-year head coach on Sunday. Arroyo, a former Oregon assistant like Nevada head coach Ken Wilson, was 7-23 as UNLV coach. He lost his first 14 games and won seven of his last 16.

Wilson’s Wolf Pack finished 2-10 overall and 0-8 in the Mountain West in his first season as head coach. It is the first season in Nevada history with a 10-game losing streak all in one season and also the first for the program to lose all of its conference games.

“It’s been a real challenging year,” Norvell said. “The first month was so disjointed. But this team really became a group that I really enjoyed coaching the last two months. I didn’t trust my football team the first month.”

Norvell started 0-4 at Colorado State and began to turn his season around with a 17-14 victory over the Wolf Pack on Oct. 7 at Mackay Stadium.

“I feel like we have a foundation,” said Norvell, who also went 3-9 in his first season at Nevada in 2017 and finished his career at the school by winning 27 of his final 40 games. “We have a lot to build on.”

The Nevada Appeal’s Mountain West football rankings for the week of Nov. 28: