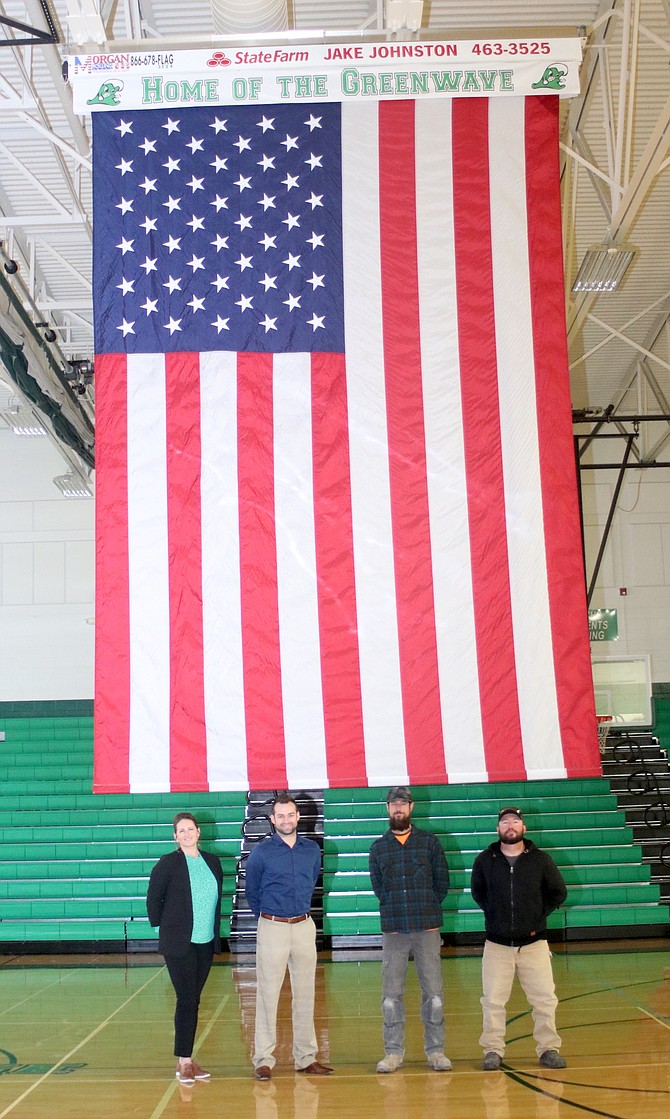 A wave for both state and national pride is hanging above the basketball court at the Churchill County High School's main gym.

Recently, a small dedication for the Nevada and United States flag was unveiled by the organizer and school officials. Loni (Johnston) Faught, a 1997 CCHS graduate, became the volunteer project coordinator.

Finding community support to buy the two flags also became a challenge for Faught, who has two daughters attending CCHS. Faught, though, said she didn’t have too much luck in finding contributors.

But to the rescue came Jake Johnston from State Farm Insurance.

“My brother Jake caught wind of my passion project and said he would love to help,” Faught said. “Greenwave pride runs deep in our family, and it just seemed like a worthwhile endeavor to give back to the school and the community.”

Johnston, a State Farm Insurance agent in Yerington, said he is honored to be part of his sister’s project. A three-sport athlete in football, basketball and track & field, Johnston is part of the athletic lore as his name is etched on a display for setting the CCHS high jump record in 2010.

Faught said she wanted to give back to her alma mater because she has many great memories from the school.

“You learn a lot of life lessons on the basketball court and even more about yourself,” she said. “I’m so thankful for those lessons learned. When the opportunity came up I knew I really wanted to give back to the school and community I grew up in.”

Faught calls the United States the greatest nation on earth, and she has pride in knowing that and recognizes the freedoms the country’s citizens have. Both Faught and Johnston hope the flags will be appreciated by the spectators and participants who come to an event in the gym. Faught said she hopes the Nevada and U.S. flags can be a symbol of inspiration, unity, community and Greenwave pride.

“I hope the flags will be enjoyed and appreciated for many decades to come,” she added.