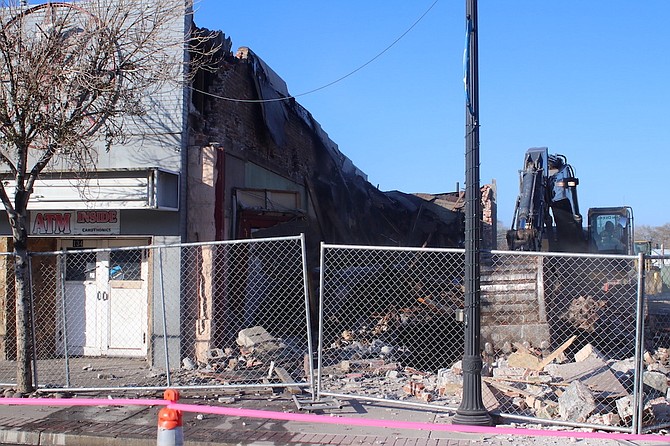 A portion of a city block south of the Fallon Nugget was recently demolished. A timetable is being established to determine future development.

Residents may have noticed something different on Maine Street.

A handful of onlookers who gathered near the downtown fountain certainly did as A & K Earth Movers recently began demolishing buildings immediately south of the Nugget to Lumos and Associates — a multidisciplinary firm that provides engineering, consulting and surveying services — to make room for future expansion.

“Our goal is to clear it up and build a new structure,” said Scott Tate, president and general manager of WCW Corp., the parent company that owns the Fallon Nugget.

According to Tate, a timetable is being developed to determine future steps for building on the excavated land. In December 2013, A & K Earth Movers razed the old Candylyscious store and the Western Hotel in a phased demolition. At the time, Tate told the LVN the economy made it difficult to determine when any building would move forward.

Move forward to a shaky economy in late 2022, and Tate said, “everyone is backed up and busy.”

The buildings demolished in mid-November included the Towne Hall, a barber shop and a bar. Tate said WCW now owns the Lumos and Associate building, which it didn’t in 2013. Tate added he doesn’t have a timetable when that structure will be razed.