Silver & Snowflakes: From Cinderella to the Grinch, Hoffman shines 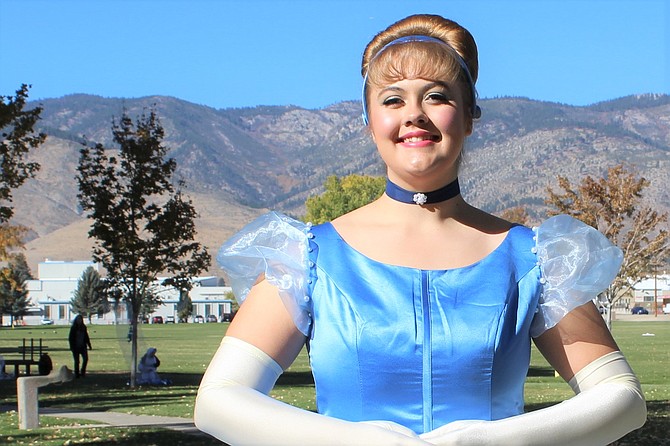 Kristen Hoffman is a local aspiring actress who will be featured this year playing the Grinch at the Silver and Snowflakes Festival of Lights to the delight of the audience and mostly Carson’s fifth graders as she slithers down the Capitol steps to do what the Grinch does best … mess with them!

Born in Carson City and now in her senior year at Dayton High School, Hoffman has been very busy this season acting and singing in several productions including being a part of the ensemble in the Western Nevada Musical Theater Company production of “Holiday Inn” and as Cinderella is the latest successful Wild Horse Production over the Nevada Day weekend.

She learned acting techniques first playing as one of the orphan girls in “Annie” when she first joined the Wild Horse Children’s Theater at the tender age of 6 and has acted with the theater group all these years.

"Kristen has been a part of Wild Horse Children's Theater for the past 11 years,” said Carol Scott, executive director of Wild Horse Productions. “In those 11 years I have watched her literally grow up before my eyes! Not only is Kristen a very talented singer and actress, but she also volunteers to work behind the scenes and is a mentor and role model for many of our younger actors. Kristen always goes the extra mile to help wherever she is needed and is valued member of our theater company."

Playing Cinderella in the Nevada Day production of “Fairy Tale Express” was Hoffman’s last gig with WHCT since, at age 17, she is “aging out.”

Hoping to be accepted at BYU-Idaho following graduation to begin nursing classes — and maybe taking some courses in the College of Performing and Visual Arts — Hoffman is in the process of creating her own cottage business to set up princess parties for kids. Of course, she will be the beautiful Cinderella! Her whole family is involved in theater. She is the oldest of three including a younger sister and brother who also perform for WHCT, and her mother is a costume designer.

Leaving the shelter of home, her next steps into adulthood she says are “kind of scary because I now need to figure out how to be an adult.”