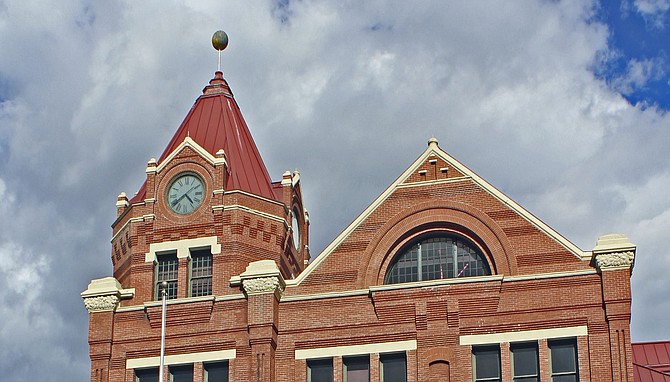 Inside this clock tower the carillon precisely strikes on the hour, quarter hour, and half hour. The automated chiming system allows for programming of popular tunes. During the holidays, carols can be heard providing holiday spirit.

At approximately 4 p.m. on Friday, Dec. 2 — the evening of the annual Silver & Snowflakes Festival of Lights — sounds of favorite holidays tunes will be emanating from the picturesque clock tower of the Paul Laxalt Building to officially herald in the holiday season.

You’ll hear “Silver Bells,” “Rudolph the Red Nosed Reindeer,” “Santa Claus is Coming to Town,” and more chiming a minute or so after the carillon chimes the hour, quarter hour, and half hour.

Many of us have taken the chiming of the bells for granted, probably not curious enough to wonder who programs the music or how the clock is maintained.

In this electronic day and age, we assume everything is electronic, but that assumption would be incorrect.

Though the clock is not electronic, the carillon is. The first carillon was installed in October 1999, chiming for the first time on Oct. 30 at the Nevada Day Parade. It took collecting $11,000 from committed citizens who gave us this gift of nostalgia. Two additional carillons have been installed since with the last installed in 2012.

The history of this 131-year-old iconic downtown four-story building has been written and researched several times and continues to be fascinating not only for the history of what was Nevada’s first federal building built by prolific architect Mifflin E. Bell but also for housing the ninth of 17 known clocks built by Joseph Barborka Clocks of Iowa City, Iowa.

Back to the clock and the chimes. It was in 1996 that new Carson City resident Bill Hartman first noticed the clock was not ticking after being operational for more than 100 years.

An engineer with a passion for tinkering, Hartman recruited fellow engineer Lee Carter to voluntarily spend more than 100 hours restoring this piece of history found literally in pieces on the floor.

Not electrifying the clock meant that someone had to keep the clock running on time.

Biweekly Hartman climbed the clock tower to check all was operational. He had to physically reset the pully and weights — a true task of love since it’s not all that easy a task. In 2009, he recruited Kevin Hill as his volunteer assistant to learn the “ropes” and relieve him when necessary.

Today, Hill still winds the clock every 14 days as one would wind a grandfather clock by hand cranking the 75-pound weight up the 85-foot cable from the street level to the tower.

“Picture how you would wind your grandfather clock, except I have to crank the cable up four stories in what looks like a chimney flue,” he said.

One of the clock faces is still inoperable due to the earthquake damage caused by the Dixie Valley Earthquake in 1954. Hill is hoping to be able to restore the historic clock by soliciting donations.

As for the tunes, the electronic carillon is automated to sound like what would normally be 23 well-tuned bronze bells and can be programmed to sound the Westminster Quarters as well as musical scores easily programmed by Hill who has earned his stripes as a volunteer carillonneur.

Hill is “honored to do this for the city,” and feels very gratified to be able to be a part of Carson City history that began with the completion of the building opened in May 1891 to house a U.S. Post Office, federal courts, a land office and the weather bureau. When purchased by the state, it was the state library and after years of being vacant, today is the home to the Nevada Commission on Tourism. The venerable building has withstood the test of time and many remodels – just like the clock!

Enjoy a bit of nostalgia as you listen to the melodic chimes tolling holiday tunes while walking through the Christmas Wonderland in downtown Carson City this holiday season and give silent thanks to the volunteers who care enough about our history to volunteer time, talent, and dollars to keep our history alive.