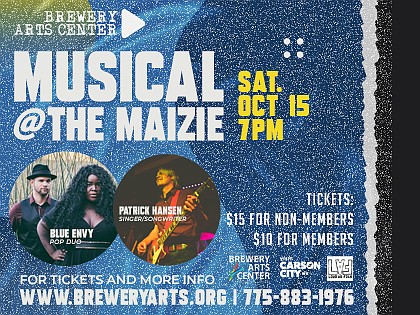 The Brewery Arts Center is excited for the return of Musicale@TheMaizie at 7 p.m. Saturday, Oct. 15

This new singer/songwriter series in what was formerly the Maizie Harris Jesse Black Box Theater, now simple known as The Maizie has created quite the buzz amongst music enthusiasts throughout the region. Musicale @TheMaizie is performed in an intimate setting with local and touring singer/songwriters giving them an opportunity to connect with the audience, interact and discuss the creative process. The definition of musicale is “a musical gathering or concert, typically small and informal” and that is exactly what this series is intended to be.

This Saturday’s event will begin at 7pm with two performers, Blue Envy and Patrick Hansen. This series is curated by Spike McGuire who says “The artist that impress me the most are those who approach the craft with distinct voice and perspective, which is exactly what folks are going to see from Patrick Hansen and Blue Envy this Saturday at the Maizie. Both songwriters have deep-rooted pop-sensibilities that branch out to thrive in a variety of genres."

Patrick Hansen is a Sparks based singer songwriter. His love of an interesting mix of music including folk, classic country and western, blue, and rock and roll creates a set that is sure to make everyone happy. His defining, gritty vocals are hard to miss.Also he's fresh off the release of his debut solo album Lap Dance and is sure to have that in the mix!

Keva Tanji aka Blue Envy is a Pop musician based out of Nevada’s Great Basin desert, with influences ranging from Burna Boy, Mr. Eazi, and The Clash, to Erykah Badu, Diplo, and The Strokes. An electrified acoustic act, Keva Tanyi assumes the role of lead vocalist and guitarist while Max Landis holds down the supporting vocals and bass.

Tickets are $10 per person and available at breweryarts.org. Additional information and videos can be found on our Facebook page.