Townsend: A trailblazer in Greenwave athletics 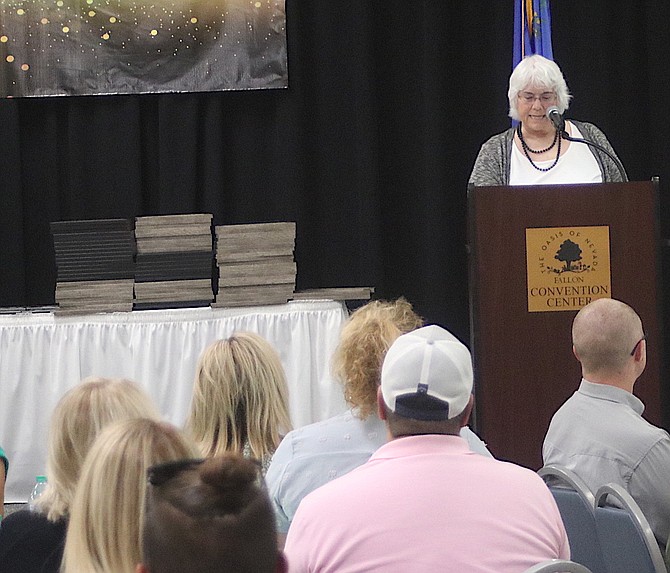 Ellen Townsend, a member of the both the Greenwave and University of Nevada halls of fame, delivered the keynote address at Saturday’s induction.

When she was growing up in Fallon, Ellen Townsend wasn’t afforded the same opportunities to play in sports like girls and women have today.

In 1972 Congress passed Title IX that prohibited discrimination of playing sports based on sex, but the years before then, Townsend and girls across the country were forced to find creative ways of getting on the playing field. She wore boys tennis shoes and was criticized and called names because she wanted to play sports.

“As a kid, I hung out after school or on weekends with the neighborhood gang who gathered together to play football on the front lawn of the Old High School or we would sneak into the gym through the open bathroom window or gather at West End courts to play basketball — occasionally playing baseball on the gravel fields,” Townsend said before 250 people gathered for Saturday’s Greenwave Hall of Fame Induction Ceremony at the Fallon Convention Center.

“I tagged along to Little League practices where Bob Whitney and Charlie Driver coached their sons, Rob Whitney and Chuck and Donnie Driver, wishing I could play but being told girls were not allowed to play Little League. One practice, Bob and Charlie let me get into the batter’s box to face Charlie who had quite the fastball. I fouled off one of those fastball pitches and hit the next one to right field. What an amazing feeling. Little did anyone know how thrilled I was to get that opportunity, it was emotional, What a boost it gave me as an athlete.” 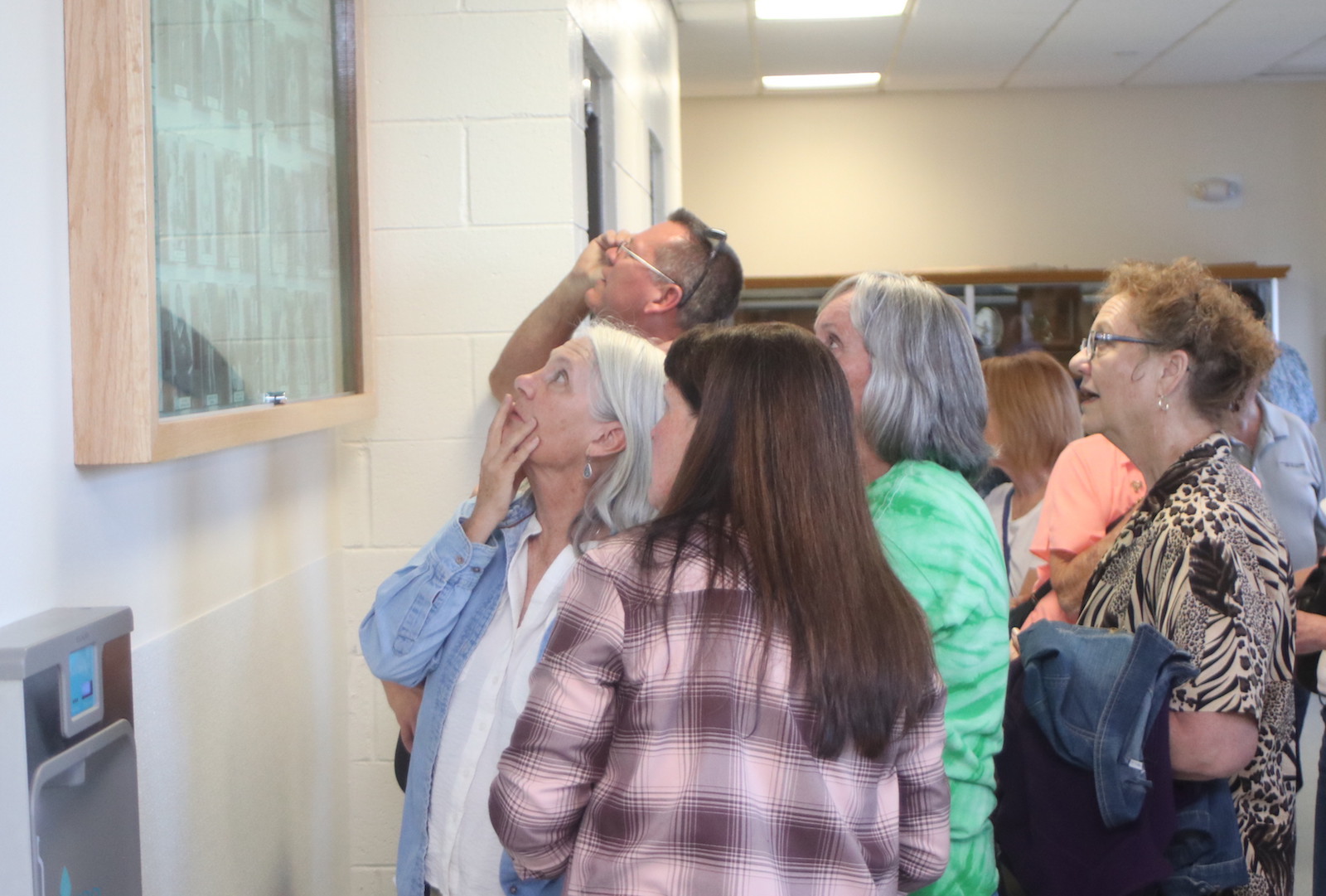 Inductees from 2020 and 2021 look at their photos on the Greenwave Hall of Fame wall at the Elmo Dericco Gym.

Townsend, a 2017 GHOF and 2019 University of Nevada athletics HOF inductee, was the evening’s keynote speaker as the GHOF recognized two classes of inductees after a two-year delay due to the coronavirus pandemic. The classes of 2020 and 2021, which included teams, coaches, contributors and athletes, were recognized for their achievements and contributions to Greenwave athletics.

Two days prior to the ceremony, inductees gathered at The Grid for a social where many reminisced about their time with the Greenwave. On Friday, the inductees toured the Elmo Dericco Gymnasium, including the lobby where they saw the GHOF enshrinement.

“The last three days were reacquainting with so many people we haven’t seen in years. That’s the best part,” said Becky Paul Matthews, who was inducted with the 1974 state gymnastics team.

Megan Roze Schank, who during her senior year won three state titles in the 400 and 200 meters, and long jump, breaking the school record in the first two, brought in a three-inch deep scrapbook of the news clippings her parents compiled.

"It makes me feel very proud,” Schank said about emergence of women’s sports and progress made over the past half-century. “I have lived in a lot of different places (after graduation). Coming from Fallon, I had a good support system, a lot of great coaches who actually took me to California or the basketball team went up to Oregon where we had tournaments or the Fresno relays.” 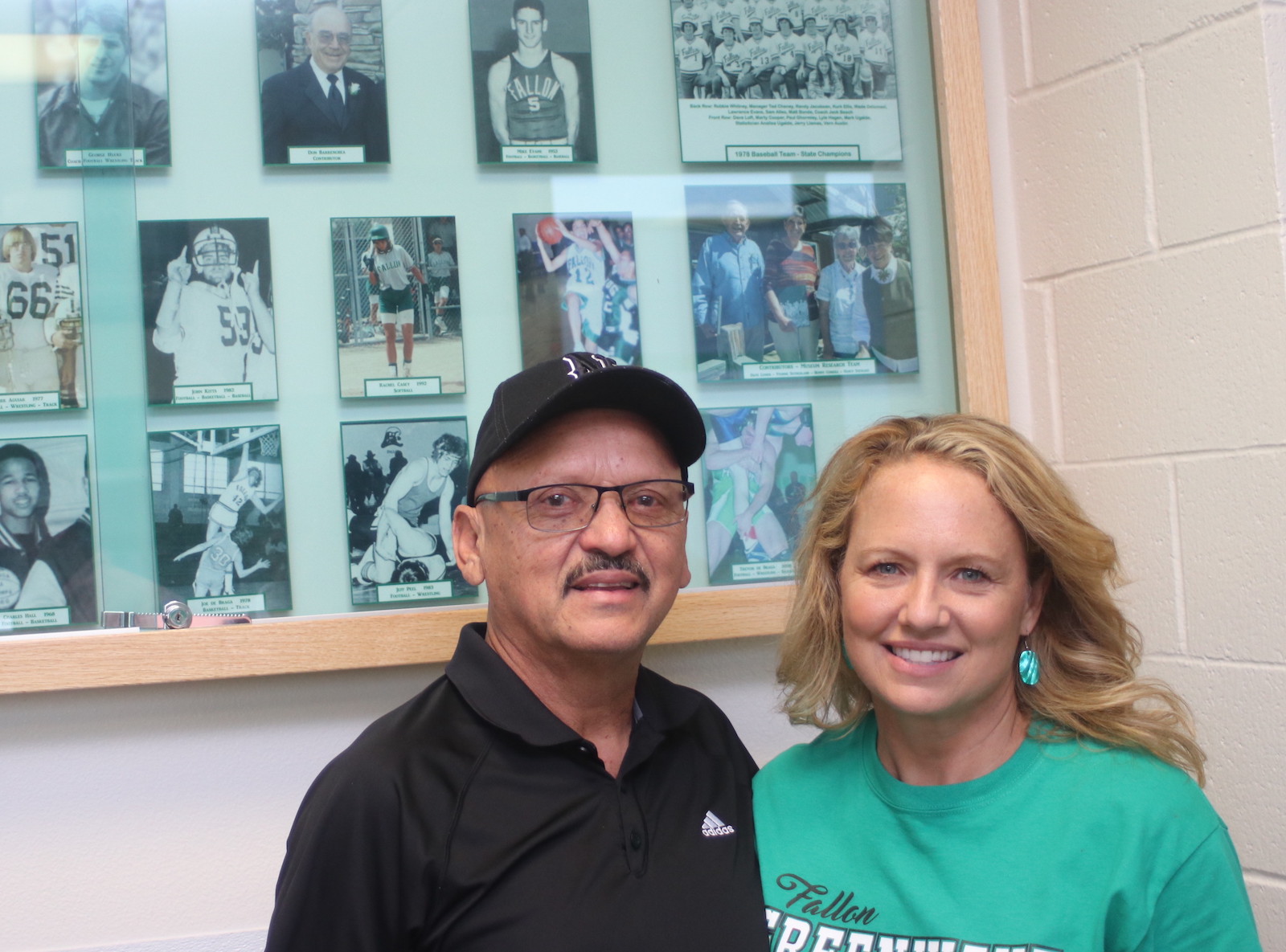 Steve Ranson/LVN
Megan Roze Schank, who competed in multiple sports during the late 1980s and early 1990s, had the opportunity to reunite with one of her former coaches, Bert Serrano.

During the ceremony, GHOF President Steve Heck recognized the efforts made by his committee over the past two years, navigating through the pandemic to finally bring the ceremony back to light after its last appearance in 2019. The GHOF also had a moment of silent for those who died during the two years, including the GHOF’s first president, Paul Orong, who died earlier this year, and 2017 GHOF inductee Jack Beach, who died in 2021.

“It’s a huge relief to get to induct the two groups,” Heck said. “We’re just ecstatic to get them in there. I thought it went very well. Everybody seemed really excited and happy. It was a great group of inductees.”

Cheryl Olson, whose late husband, Fred, was inducted as a contributor for his involvement as the school’s band director, was pleased to see the event come together.

“Fred would be so proud of tonight,” Olson said.

Saturday was especially important for Townsend and the community because this year marked the 50th anniversary of the passage of Title IX. More girls and women participated in athletics, going from 3,000 in the 1970s to more than 3 million today.

Townsend turned in one of the best playing careers in Greenwave athletics and was named the 1970s’ top athlete. Townsend was a state champion and record holder in track and field, and was inducted with her 1975 AA state champion girls golf team on Saturday. She moved to Reno to continue her education where she played collegiate volleyball, softball and women’s basketball from the mid-to-late 1970s, leading the Wolf Pack to three NCIAC titles in 1976-77 in volleyball, women’s basketball and softball.

Townsend credited the support of her family for staying the course when others made fun of her and other girls who played sports.

“I’ve had so many role models and influencers in my life, the biggest of course was my mother,” Townsend added. “She always stepped in to play if our softball team needed players and play catch with me, and she broke her hand during one of those throw-catch times. She didn’t find out about it for about three to five years later, but she was an athlete in her own day. Basketball, badminton and swimming were her passions. She made sure Brenda, Cheryl, both outstanding athletes in their day, and I were involved in sports and stepped up as Cheryl’s Miss Softball America’s coach.”

As Townsend spoke on Saturday, she presented slides to connect the audience with history. She concluded her storytelling with a request to acknowledge the women in your life and have them share their sports memories and dreams.

“Get them to reveal their stories, recognize their influence in your life, seek out women in your lives and get them to tell you, their history. Complete the circle,” Townsend added.