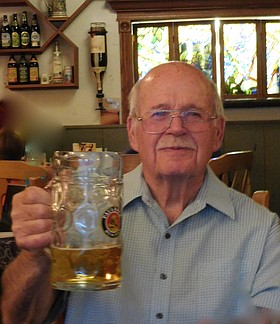 A native of Alabama, Bob had made his home in Minden, Nevada, since 1999 moving from Darmstadt, Germany. He had just retired after working for 42 years for both the
Pacific and European editions of Stars and Stripes, a daily newspaper serving scores of American service members and their families stationed overseas. Bob got his first taste of
the newspaper business when, at age 16, he started writing a sports column and selling ads for a weekly paper in Dothan, Alabama, in addition to writing for the high school
newspaper.

Bob was born in 1936 on a small farm in rural Pike County, Alabama. His dad died when he was 10 and his younger brother was 8. Both his older siblings, Ben and “Sis”, had
already left home. Struggling to make ends meet, this is when Bob learned to pick cotton. He joined the Army after finishing high school to help his mom pay the bills. He always
said that turned out to be one of the best decisions in his life. Within a year, Bob was working for the Pacific Stars and Stripes based in Tokyo. It was 1957 and he had his first big-
time interview with Bob Hope at Camp Casey, South Korea, where Hope was entertaining the troops at Christmas.

In 1959 Bob was assigned to the European edition of Stripes. His sports writing made an impression on the sports editor who asked him if he wanted to go to Paris to write about
the Air Force football programs. Sure, he replied, you want me to go for the weekend? No, his boss replied, for two years. So the young, single GI got to live in Paris and travel
around France. While in Paris, Bob obtained an exclusive interview with Wilt Chamberlain who had left the NBA for a brief time to join the Harlem Globetrotters.

Later in his civilian career at Stars and Stripes Bob became the special projects editor. In this role he led his team in an award-winning series, “Buying U.S. Land Overseas”. This
series exposed the sale of worthless land in Florida, Mississippi and California to U.S. service members overseas by unscrupulous salesmen. Bob and his team were awarded the Best
Business News Reporting from Abroad by the Overseas Press Club of America during ceremonies at the Waldorf Astoria in New York City. The series garnered numerous other
awards, but standing on the stage at the Waldorf was one of his proudest moments.

As city editor for Stars and Stripes, Bob mentored many young journalists over the years. One of his former reporters recently wrote that Bob “taught us ... how to stay calm when all around us is in chaos, how to work with volatile personalities, how to treat everyone with respect, and how to stick to our principles even when we are being pressured to
sacrifice them.” These qualities were one of the reasons Bob was selected to serve as temporary managing editor of Stripes while the paper was in transition and advertising world-
wide for an editor position which would merge the military colonel’s editor-in-chief ’s duties and the managing editor’s duties.

After three years of retirement, Bob joined a team of retired journalists, who—as media consultants—train U.S. military leaders to deal with members of the press. He spent 2-3
months of the year on the road—working multiple times in Germany, South Korea, Japan and a number of U.S. destinations. He always looked forward to his next adventure—
whether it was work, travel or golf.

Bob loved his family and would do anything for them. Bob doted on his two children, daughter, Zena, from his first marriage to Sally Wicker, and son Thomas, who was born 11
years after he and his second wife, Kathy, married. He met both Sally and Kathy working at Stars and Stripes. Bob and Kathy celebrated 40 years of marriage in July this year.

Bob loved the Red Sox and playing golf. Taking up golf in Japan in 1958, he played in Germany, France, Spain, Portugal, Switzerland, Luxembourg, England, Scotland, Wales,
Ireland, Northern Ireland and 12 states from New Jersey to Hawaii. Bob instigated the first trip by friends to the Golf Club Grand Ducal in Luxembourg. Known simply as “Lux”
to those who played the 72-hole, four-day invitational tournament (party), Bob and, eventually wife Kathy, sent out invitations, reserved hotels, received entry fees and bought
prizes for 30 years. Bob was a man of big plans—big pictures. Kathy often worked out the details. She says when she married Bob she didn’t quite realize she was marrying into ”Lux” for life.