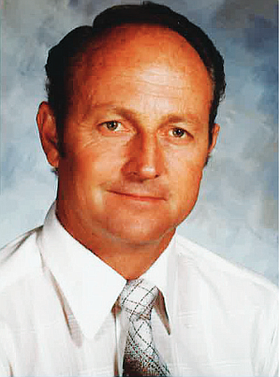 Ted Tiffany of Genoa, passed away on Tuesday, June 1,2021, surrounded by his wife and three children.

Ted was born in Glendale, California and spent the next 60 years there. He graduated from Glendale High School and went on to attend nearby Occidental College in 1957,majoring in physical education.

He was the first recipient of the High School and College Hall of Fame for Basketball. He was selected as an All-American in the small college division, where he held the highest scoring in a game record, when there was no such thing as a three pointer. His record was broken only two years ago.

He spent his life in education as a teacher, athletic director, and as a principal of Glendale High School. He served on the community college board for twelve years and was their first President. He was a member of the Kiwanis organization for 60 years where he served as President.

Ted and his wife moved to Genoa in 1995. He served As Board President and Chairman of the ALCC. He was active in the Historical Society of Douglas County, Friends of Genoa, Friends of Snowshoe Thompson, and with the Genoa Volunteer Fire Department. He was very active in
the Genoa Lakes Community and served as the Men’s Club First President.