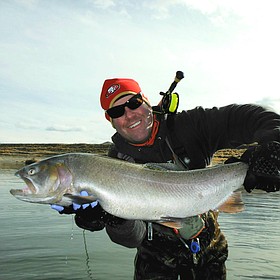 Jeffrey Richard Moon was born on December 21, 1966, in South Lake Tahoe, California to Walter “Jerry” and Katherine (Egbert) Moon. Most of his childhood was spent in Fallon, Nevada where he was a proud CCHS Greenwave graduate. He went on to play Roadrunner Football at Butte College, and to study at the University of Nevada, Reno and Sierra Nevada College.

Jeff was a career UPS man, having dedicated over 31 years delivering to customers who easily became friends as he was not a stranger to anyone. It was at UPS where, 31 years ago, he met his adoring girlfriend of the past three years; that was her first day on the job.

Jeff was passionate about fly-fishing, his sports teams, and craft beers. We can picture him now... at one of the many get togethers he frequented, happily making plans for a day of fishing out at Pyramid Lake, chest up to the bar with a new brew, dressed in his SF Giants, Nevada, or 49ers gear and always sharing the brightest of smiles. Jeff was greatly fond of the outdoors and sporting events. If he wasn’t out hiking, biking, hunting, or fishing, he was watching football, basketball, or baseball, always surrounded by friends and family who cherished his joyful company. He was also his nieces and nephews’ biggest fan, constantly cheering them on in their individual endeavors. Jeff was fun, gracious, congenial, and adventurous – truly one-of-a-kind.

Jeff was preceded in death by his father, Jerry. He is survived by his mother, Kathy, his brothers, Steve (wife Jane, children Mahal and Steven) and Greg (wife, Theresa, children Jordan, Jackson and Makenly) of Fallon, and his girlfriend, Kathy Day, her daughter, Kara and son, Jake of Sparks, Nevada. He also leaves behind numerous friends he would count, and who would consider him, as family.

In light of the covid pandemic, Jeff will be laid to rest in a private ceremony.

A Celebration of Life will be held on Saturday, September 25, 2021, from 1:00 to 5:00 pm at Revision Brewery on South Rock Boulevard in Sparks, Nevada.

In lieu of flowers, please donate to the American Cancer Society in Jeff’s memory.