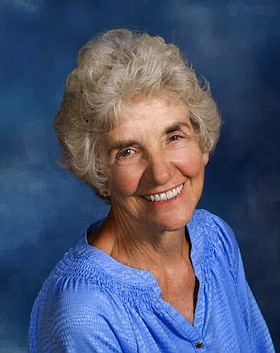 Betty Eileen (Rogers) Thoreson passed peacefully in her home with her family at her side on August 28th, 2021. She succumbed to a battle with terminal cancer at the age of 82. She was born on October 9th, 1938 in South Side, West Virginia, near where the Ohio and Kanawha Rivers intersect. She was the daughter of the late Loraine Frances Rogers and Edythe Mae Plants.

Betty was raised in West Virginia with meager beginnings. She experienced early life, sometimes in houses with dirt floors and
an outside outhouse. It was during these times where Betty’s grit and toughness emerged. But at the same time, she was able to maintain her sense of humor, even up to the day before she passed. Betty was as “sharp as a tack” and used her wit to “spar” with the best of the best.

Betty was married for 46 years to Jay Thoreson, up until he passed in 2002. Her desire was to celebrate 50 years of marriage with Jay, but that didn’t come to fruition. Instead, she modified that dream and held a “50 Years Living in Carson City Anniversary Party”, with her family and friends. Betty and Jay moved to Carson City in September of 1963 where they raised their family. They had three children, Richard, Donald and Julie.

Betty started with the Carson City School District as the Secretary at Carson Elementary in September of 1967 and continued that position for 32 years up until her retirement in 1999. In September 1970, she moved to the Middle School, a new concept for Carson City. She remembered answering the phone and hearing, “Is this the Middle-Class School?” She eventually became the Office Manager at Bordewich-Bray Elementary. Betty knew just about every child that went through the Carson City school system.

Betty was proud to hold a Life Membership in the PTA. She joined in 1962 and held various offices along the way up until her retirement. Betty was active in the Carson City School District’s Classified Employees Association, where she served on the Negotiations and Grievance Committee. She stood firmly for her co-workers for what was fair and honest. For her efforts, she was awarded the Classified Employee of the Year. In 1967, she became a founding member of the St. Paul’s Lutheran Church in Carson City. She served as the Treasurer and was on the Church Council. Betty volunteered at the Carson Tahoe Hospital for the last 25 years. Her last role was in the Hospital Gift Shop, where she really enjoyed shopping, on her own time with her volunteer discount! She was also a member of Philanthropic Educational Organization (PEO).

Betty’s family and friends were very important to her. She was even known to celebrate her birthday for over a month. Betty really enjoyed gardening and her backyard was a paradise filled with flowers. She also loved to travel, mostly camping along the way, and was fortunate enough to see the country from Mexico City north to Alaska and everywhere in between both the Atlantic and Pacific Oceans. In fact, she was able to touch foot in all 50 states!

Several years after Betty lost her husband, she was able to form a companionship with a very kind and fun gentleman, Clyde Shoe- maker. They formed the “Betty and Clyde Gang” and navigated the Inner Coastal up and down the east coast in Clyde’s yacht.

A Memorial Service will be held on Saturday, October 9th at 11:00a.m. at St. Paul’s Lutheran Church in Carson City. All of her friends and family are invited to a Celebration of Life at her home at 95 Paul Way in Carson City after the service.

In lieu of flowers, donations may be made in honor of Betty Thoreson to the St. Paul’s Lutheran Church Flower Garden or the Cancer Ward at the Carson Tahoe Hospital.