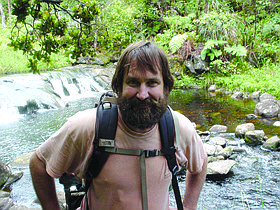 Steve was born in Reno, Nevada on September 25, 1961. He studied Mechanical Engineering at the University of Nevada, Reno but was always most at home as a computer programmer. He made a career as an Electronics Engineer with the Department of the Navy where he helped to build the first intranet capability, the iNet, at the Pacific Missile Range Facility in Barking Sands, Kauai, Hawaii where he lived for 12 years and met his wife, Paola.

He retired from the Department of the Navy in February 2005 to raise his only daughter, Acacia. After months of searching for a new home, Steve settled in Brookings, Oregon with his new family. There he continued to practice and improve his computer programming skills on his collection of Raspberry Pi’s. He spent time with the fishing club where he showed Acacia all about salmon, steelhead and trout. Steve enjoyed building his own antenna with the Radio club so we could enjoy all the local television channels. He also worked with the bee club and cultivated beehives where he harvested honey for us all. Steve lived in constant improvements to his environment, his daily practices and himself. He enjoyed skiing, and mountain climbing with Mount Rainier being his highest climb. His adventures included scuba diving, sky diving, fishing, hunting (birds, elk, deer, goats, wild boar), hiking, white water rafting, kayaking, bee keeping, mushroom hunting and gardening. An avid learner, he studied Buddhism, quantum physics, philosophy and always enjoyed a good puzzle whether verbal or manual. Whether he was riding his bike around town (coffee mug in hand), playing tennis, or kayaking up the river, because down the river was too easy, he had a smile ready for anyone he encountered.

Steve’s woodworking practice resulted in many improvements at home and at the 3/4 Acre Woods where he kept his beehives. At home we enjoyed constant attention to our bunnies and our dogs and could always expect a perfected cup of coffee or an evening cocktail accompanied by cheese and crackers, of course, plus whatever fruit was growing in the garden and maybe some freshly smoked salmon. We all loved and admired Steve for everything he was and what he taught us. He showed us a world filled with forests, stars, oceans, life, encouragement, and love surrounding us always. We are all better humans because we were graced with knowing him.

Steve is preceded in death by his father Donald Aubrey Pringle and survived by his mother Delores Pringle, brothers Ken and David Pringle, his wife Paola Pringle, his daughter Acacia Pringle, and step children Dante, Arman and Nastassia Carrasco.

Services will be held at The Forest Conservation Burial Ground at Willow-Witt Ranch in Ashland, OR on The Autumnal Equinox 22 September 2021 at 1100 a.m. For more information on the location please go to https://theforestconservationburial.org/wp-content/ uploads/The-Forest-Conservation-Burial-Ground- brochure.pdf

We are asking that donations to the following non-profit organizations be considered in lieu of sending flowers.
Send donations payable to:
The Forest Conservation Burial Ground 658 Shale City Rd.
Ashland, OR 97520 https://theforestconservationburial.org/wp-content/ uploads/The-Forest-Conservation-Burial-Ground- brochure.pdf
Or
To:
Oregon Public Broadcasts
Online at opb.org