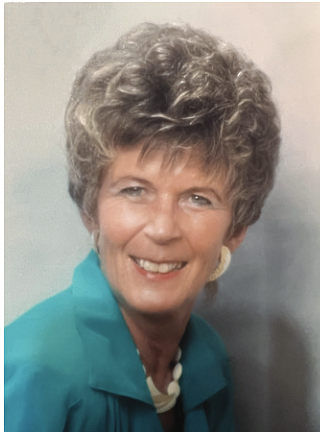 Beth was born in Culbertson, Montana on September 13, 1934. She attended Little Falls, Minnesota public schools. She grew up an independent young woman who loved to ice skate in the winter, swim in the summer, and play the piano. At age thirteen her family moved from Minnesota to Longview, Washington where she graduated from R.A. Long High School. She attended and enjoyed furthering her education at WNCC after her children were grown.

Beth married Richard McAuliffe in 1953 in Kelso, WA. In 1962 they moved with their first four children to Carson City where they enjoyed a drier climate and the next three children were born. Beth quickly made a house a home, loved to cook, and learned to stretch a buck to
feed their family. She became involved in PTA activities at St. Teresa’s School and the Carson City 4-H community. Beth loved to entertain and was incredibly creative- a new decor for every season. She touched many lives through her sewing classes, sewing for others, and gathering neighbors for a coffee klatch or a craft project when the kids were off to school. She organized many Christmas bizarres and annual fashion shows for St. Teresa’s School and later chaired rummage sales for St .Galls. Her life long friendships remained a constant joy.

In 1979, Dick and Beth moved to Minden. She loved her job working as a night school secretary at Douglas High and the camaraderie with her coworkers. Her organizational and secretarial skills landed her many jobs before she began her career in 1985 with the Secretary of State both in Carson City and Las Vegas. In 1994, Beth and her independent spirit relocated to Henderson where she made her permanent residence.

Beth was a life long learner, a dedicated bargain shopper and a good friend to many. She loved a day in the Tahoe sunshine, a good joke, coffee and divinity for breakfast, and a tequila sunrise every evening.

She was predeceased by her parents, Stanley W. and Imbie Foss and her brother Stanley V. Foss.

A private family service was held. A Celebration of Life will be held at a later date.