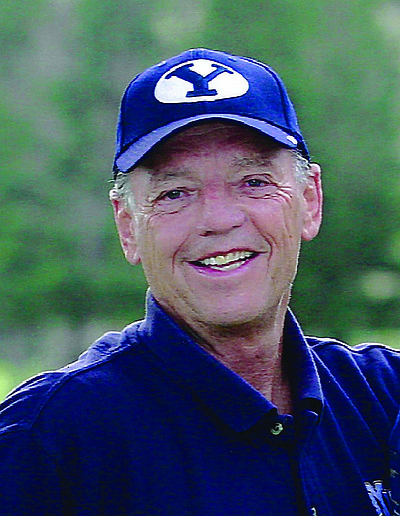 St. George, Utah - Robert Donald Morris Jr. (Don), age 79, beloved husband, brother, dad, grandfather, and great-grandfather completed his mission on earth and was called up to join his Heavenly Father’s team. Don passed away in St. George, Utah, surrounded by his wife and family members, after gracefully being released from a valiant battle with Alzheimer’s. Don leaves a definitive legacy of unconditional love, laughter, and joy with the countless friends he embraced throughout his life.

Don was born on October 30, 1943, in Winnemucca, Nevada, to Robert Donald Morris Sr. and Virginia Nalder. He was raised in Gardnerville and Elko, Nevada, where he learned to love the mountains, nature, and competing in sports. Don was married to his wife and eternal companion, Chris, in the Salt Lake City LDS temple while they were both attending Brigham Young University. He graduated with a degree in Geology and a lifetime love for BYU sports. His new father-in-law introduced him to the game of golf which he was passionate about throughout his life. Don and Chris returned to Nevada, living in Elko, Reno, and Boulder City, to raise their family of six children and pursue a career in geology. In addition to traveling to some of the remote places in the world for work, Don and his father were instrumental in pioneering an area of Nevada that became one of the most productive gold mining areas worldwide, known as the Carlin Trend. Once his children were grown, he moved to Provo and eventually retired to St. George, Utah where he was a regular at the many local golf courses. Don was very active in his LDS faith, serving a mission in Wyoming with his spouse. Don lived a life of service and was always first to volunteer to help those in need. He never let work get in the way of a good time, always prioritizing spending time fishing, golfing, or generally goofing off with his 6 children, 28 grandchildren and numerous great- grandchildren who lovingly refer to him as “Papa”.

The family would like to invite all to join them in a celebration of Don’s life.