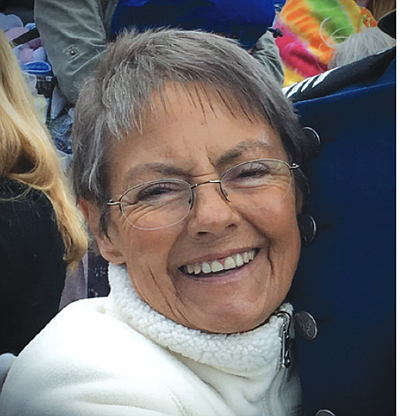 Joan Davis Worley passed away from numerous medical conditions on October 25, 2022. The loss of her vibrant, fun-loving personality will be greatly felt by her family and all who knew her.

Joan was born on September 10, 1941 in Glendale, California. She was raised by her parents John and Katherine in the San Fernando Valley where she graduated high school from San Fernando High in 1959.

It was in high school where she first met Sam Worley, her husband for 50 years. Prior to marriage, the two corresponded while Sam served in the United States Navy for three years. Upon his return, the two were married in Riverside, California and then moved to Fairbanks, Alaska where Sam accepted a job as a line mechanic working on heavy equipment. In all, they had three sons: Samuel (Kelly), Duane (Michele), and Daniel (Kandee).

An earthquake in Anchorage Alaska in 1964 eventually persuaded them to leave the wild frontiers of Alaska in pursuit of work in agriculture in Oklahoma and Texas. It was here that Joan was led to Christ in a small country church in Okemah, Oklahoma. She was welcomed into the family of God, home at last, she had found family! Eventually, her husband Sam accepted God’s call on his life which resulted in a return to academia, first college then seminary in Marin County, California. Upon Sam’s graduation from Seminary, the family of five relocated to Lake Tahoe where Sam accepted a pastoral position at First Baptist church of South Lake Tahoe.

It was the years living at Lake Tahoe where Joan raised her three sons, worked diligently supporting her husband’s work at the church, and volunteering for community service. Joan served for many years in the local food bank supporting those in need of food and shelter, volunteering in church activities such as vacation bible school, summer church camps for kids, and children’s ministries. Joan was a group leader in Women’s Bible Study Fellowship for many years. Joan was a people person. She loved being around members of her church, bible study members, friends and family. In spite of her medical conditions that were a life-long struggle, she rarely complained. During her life, unless you knew otherwise, it was hard to tell she had any medical issues at all.

Joan lived her life energetically. She loved life in the mountains and she loved animals too. Spending many days camping and hiking in the Sierras, walking her dogs, and feeding the neighbor’s horses. Joan was an avid reader, enthusiastically discussing her favorite reads with anyone who asked her for book recommendations. Joan also enjoyed traveling with Sam to many international destinations such as: Russia, Greece, Italy, Turkey and Israel.

A woman of strong faith in Christ, Joan was a member of Life Point Community church in Minden, Nevada. She attended various community bible studies. She firmly believed in the power of prayer, and shared prayer requests with several small prayer groups, many of which
she was an active prayer warrior for many years. Her hope and strength in God never wavered during life’s most difficult times.

Joan is survived by her grandchildren Tyler and Ryan, Calvin and Nathan, Stacey, Jeremy, Shawney, and Shay. Joan had one great grandson, Everett who lives in New Zealand. Joan was a very bright light in the lives of all who knew her – a dear wife, loving mother and grand-mother, loyal friend, and woman of faith. Although she is sorely missed by so many, there is comfort and joy in knowing that Joan is home in the arms of the Lord she loved.

A memorial service will be held at Life Point Church on Sunday November 20, 2022 at noon.
Arrangements are in the trusted care of Autumn Funerals & Cremations