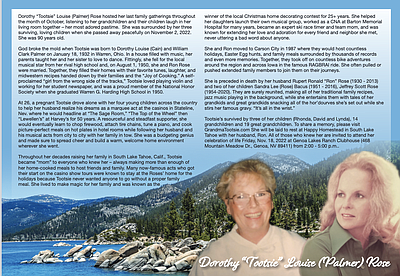 Dorothy “Tootsie” Louise (Palmer) Rose hosted her last family gatherings throughout the month of October, listening to her grandchildren and their children laugh in her living room together – her most adored pastime. She was surrounded by her three surviving, loving children when she passed away peacefully on November 2, 2022. She was 90 years old.

God broke the mold when Tootsie was born to Dorothy Louise (Cain) and William Clark Palmer on January 18, 1932 in Warren, Ohio. In a house filled with music, her parents taught her and her sister to love to dance. Fittingly, she fell for the local musical star from her rival high school and, on August 1, 1950, she and Ron Rose were married. Together, they filled their homes with their favorite tunes, laughter, and midwestern recipes handed down by their families and the “Joy of Cooking.” A self- proclaimed “girl from the wrong side of the tracks,” Tootsie loved playing violin and working for her student newspaper, and was a proud member of the National Honor Society when she graduated Warren G. Harding High School in 1950.

At 26, a pregnant Tootsie drove alone with her four young children across the country to help her husband realize his dreams as a marquee act at the casinos in Stateline, Nev. where he would headline at “The Sage Room,” “The Top of the Wheel” then “Lewellen’s” at Harvey’s for 50 years. A resourceful and steadfast supporter, she would eventually learn to chop firewood, attach tire chains, tune a piano, and cook picture-perfect meals on hot plates in hotel rooms while following her husband and his musical acts from city to city with her family in tow. She was a budgeting genius and made sure to spread cheer and build a warm, welcome home environment wherever she went.

Throughout her decades raising her family in South Lake Tahoe, Calif., Tootsie became “mom” to everyone who knew her – always making more than enough of her home-cooked meals to host friends and family. Many now-famous acts who got their start on the casino show tours were known to stay at the Roses’ home for the holidays because Tootsie never wanted anyone to go without a proper family meal. She lived to make magic for her family and was known as the winner of the local Christmas home decorating contest for 25+ years. She helped her daughters launch their own musical group, worked as a CNA at Barton Memorial Hospital for many years, became an expert ski race timer and team mom, and was known for extending her love and adoration for every friend and neighbor she met, never uttering a bad word about anyone.

She and Ron moved to Carson City in 1987 where they would host countless holidays, Easter Egg hunts, and family meals surrounded by thousands of records and even more memories. Together, they took off on countless bike adventures around the region and across Iowa in the famous RAGBRAI ride. She often pulled or pushed extended family members to join them on their journeys.

She is preceded in death by her husband Rupert Ronald “Ron” Rose (1930 - 2013) and two of her children Sandra Lee (Rose) Bacus (1951 - 2016), Jeffrey Scott Rose (1954-2020). They are surely reunited, making all of her traditional family recipes, jazz music playing in the background, while she entertains them with tales of her grandkids and great grandkids snacking all of the hor’dourves she’s set out while she stirs her famous gravy. “It’s all in the wrist.”

Tootsie’s survived by three of her children (Rhonda, David and Lynda), 14 grandchildren and 19 great grandchildren. To share a memory, please visit GrandmaTootsie.com She will be laid to rest at Happy Homestead in South Lake Tahoe with her husband, Ron. All of those who knew her are invited to attend her celebration of life Friday, Nov. 18, 2022 at Genoa Lakes Ranch Clubhouse (468 Mountain Meadow Dr., Genoa, NV 89411) from 2:00 - 5:00 p.m.