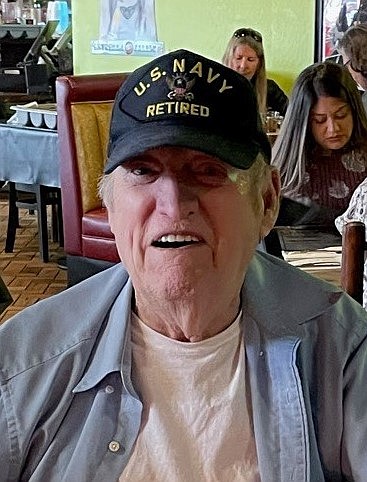 Jack was born in Nebraska, but was raised in California. He grew into a man of strong character who was quick to make friends along all of his travels. He was 6’4” with a presence to scare a grizzly bear but was actually as loving as teddy bear!

He joined the Navy in 1947 at the age of 15! His glory years were spent on a submarine and boiler room of a ship. He was a dedicated sailor and made many memories with his fellow shipmates. After his Naval retirement, he began his new command as head of security in many Tahoe casinos during the mob and Elvis Presley era. Everyone enjoyed the incredible stories he had!

Jack was a devoted Catholic that attended St. Teresa of Avila, he loved his church family and they adored him. His spare time was spent betting on his Ponies, playing Keno and he was known to make a few successful sports bets while enjoying a nice cold Bud Light over ice with a lime slice. At home, Jack was kept up to date on all of his favorite sports by Mike and Mike on ESPN every day! He enjoyed frequenting his favorite restaurants for breakfast and will be remembered as the biggest guacamole fan we knew!

Jack was preceded in death by his beloved mother, Neil Blume in 2005 and then by the love of his life, wife: Vicky Maddox in 2011. Jack loved his family and his pride and joy were all of his grandchildren and great-grand nieces and nephews (who loved his beanie baby collection). Jack will be missed and loved every single day.