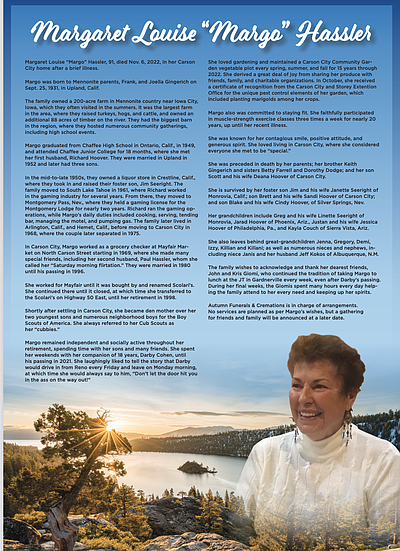 Margo was born to Mennonite parents, Frank, and Joella Gingerich on Sept. 25, 1931, in Upland, Calif.

The family owned a 200-acre farm in Mennonite country near Iowa City, Iowa, which they often visited in the summers. It was the largest farm in the area, where they raised turkeys, hogs, and cattle, and owned an additional 88 acres of timber on the river. They had the biggest barn in the region, where they hosted numerous community gatherings, including high school events.

Margo graduated from Chaffee High School in Ontario, Calif., in 1949, and attended Chaffee Junior College for 18 months, where she met her first husband, Richard Hoover. They were married in Upland in 1952 and later had three sons.

In the mid-to-late 1950s, they owned a liquor store in Crestline, Calif., where they took in and raised their foster son, Jim Seeright. The family moved to South Lake Tahoe in 1961, where Richard worked in the gaming industry for several years. From there, they moved to
Montgomery Pass, Nev., where they held a gaming license for the Montgomery Lodge for nearly two years. Richard ran the gaming operations, while Margo’s daily duties included cooking, serving, tending bar, managing the motel, and pumping gas. The family later lived in
Arlington, Calif., and Hemet, Calif., before moving to Carson City in 1968, where the couple later separated in 1975.

In Carson City, Margo worked as a grocery checker at Mayfair Market on North Carson Street starting in 1969, where she made many special friends, including her second husband, Paul Hassler, whom she called her “Saturday morning flirtation.” They were married in 1980
until his passing in 1996.

She worked for Mayfair until it was bought by and renamed Scolari’s. She continued there until it closed, at which time she transferred to the Scolari’s on Highway 50 East, until her retirement in 1998. Shortly after settling in Carson City, she became den mother over her
two youngest sons and numerous neighborhood boys for the Boy Scouts of America. She always referred to her Cub Scouts as her “cubbies.”

Margo remained independent and socially active throughout her retirement, spending time with her sons and many friends. She spent her weekends with her companion of 18 years, Darby Cohen, until his passing in 2021. She laughingly liked to tell the story that Darby
would drive in from Reno every Friday and leave on Monday morning, at which time she would always say to him, “Don’t let the door hit you in the ass on the way out!”

She loved gardening and maintained a Carson City Community Garden vegetable plot every spring, summer, and fall for 15 years through 2022. She derived a great deal of joy from sharing her produce with friends, family, and charitable organizations. In October, she received a certificate of recognition from the Carson City and Storey Extention Office for the unique pest control elements of her garden, which included planting marigolds among her crops.

Margo also was committed to staying fit. She faithfully participated in muscle-strength exercise classes three times a week for nearly 20 years, up until her recent illness.

She was known for her contagious smile, positive attitude, and generous spirit. She loved living in Carson City, where she considered everyone she met to be “special.”

She was preceded in death by her parents; her brother Keith Gingerich and sisters Betty Farrell and Dorothy Dodge; and her son Scott and his wife Deana Hoover of Carson City.

She is survived by her foster son Jim and his wife Janette Seeright of Monrovia, Calif.; son Brett and his wife Sandi Hoover of Carson City; and son Blake and his wife Cindy Hoover, of Silver Springs, Nev.

Her grandchildren include Greg and his wife Linette Seeright of Monrovia, Jarad Hoover of Phoenix, Ariz., Justan and his wife Jessica Hoover of Philadelphia, Pa., and Kayla Couch of Sierra Vista, Ariz.

She also leaves behind great-grandchildren Jenna, Gregory, Demi,Izzy, Killian and Killani; as well as numerous nieces and nephews, including niece Janis and her husband Jeff Kokos of Albuquerque, N.M.

The family wishes to acknowledge and thank her dearest friends, John and Kris Giomi, who continued the tradition of taking Margo to lunch at the JT in Gardnerville every week, even after Darby’s passing. During her final weeks, the Giomis spent many hours every day helping the family attend to her every need and keeping up her spirits.

Autumn Funerals & Cremations is in charge of arrangements. No services are planned as per Margo’s wishes, but a gathering for friends and family will be announced at a later date.