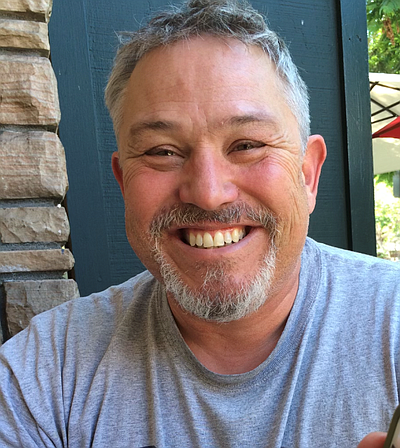 Roger ‘Greg’ Dowty passed away at home in Minden on Thursday, November 3 at the age of 61, after being diagnosed with ALS in 2021.

Greg was born in Salmon, Idaho and moved with his family to Gardnerville when he was a young boy. He is survived by his wife Tracy McAteer, sons Ryan and Jared Dowty, daughters Morgan Dowty and Stephanie Baeta, brother Brett Dowty, his parents, Barbara and Leon Dowty, grandchildren Paris, Raiden, Ryker, and Royce Dowty, aunt and uncle Marion and Roger Bitton, numerous cousins, nieces and nephews, and his beloved chiweenie and pug, Roxy and Sugar.

Greg served in the Air Force for 12 years, first as a Fire Protection Specialist and later as a Recruiter. He was awarded several achievement medals and was a small arms expert marksman. While serving, Greg completed his college education earning two masters degrees. After leaving the military he worked as a licensed clinical family therapist, working with troubled kids and performing psychological evaluations for the Montana Corrections system. More recently he worked as a civilian contractor at 29 Plams and Camp Pendelton in California helping set up the Marine Intercept Program to combat the high rate of suicide in the military. This work was very rewarding for Greg and inspired him to develop a mathematical algorithm to identify treatment outcomes for therapists around the world.

Greg also spent several years working with doctors in Montana, developing a method to extract oil from Cannabis plants to provide exact, oral doses to cancer patients. At the height of this endeavor he was featured in High Times Magazine in the June 2010 issue, which highlighted the unique grow operation he developed and oversaw.

Greg was an intellect with an amazing adventurous spirit. His humor was contagious and he could bust a move on the dance floor like no other. He loved cycling and everything about it. The last two years of his life he put 4500 miles on his bike, with over 1500 of those miles coming all while suffering symptoms of the disease he was finally diagnosed with last year. Greg was an avid gardener and he felt most at ease sitting on the beach in southern California just watching the waves lap up on the shore. He loved his family and animals and will be remembered for his kind spirit and love of adventure. Greg did not want a funeral but rather to celebrate life while he was alive. He will be deeply missed by those who loved him.

Anyone interested in making donations to further research and/or help families dealing with ALS are encouraged to do so to the Northern Nevada Chapter of the ALS organization, and to the I AM ALS Organization.