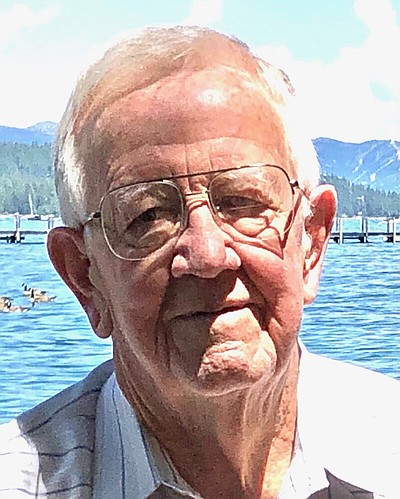 Roland Dexter Westergard was welcomed to Heaven on October 23, 2022, after a life well-lived. Born to Danish immigrants Hans and Maren Westergard on April 6, 1934, he grew up on the family ranch in Lovelock, Nevada, as the youngest of seven children.

He cherished his family and revered his friendships and often shared stories full of special memories and gratitude for treasured times. He dedicated his life’s work to protecting the natural resources of Nevada and the western states. At Pershing County High School, he was involved in student government, clubs and sports and graduated valedictorian the same year his high school sweetheart, Dixie, was salutatorian. He was ultimately inducted into the Pershing County High School Alumni Association Hall of Fame. Roland served in leadership roles at the University of Nevada, Reno from 1952-1956, where he majored in Civil Engineering and participated in numerous organizations, including the Delta Iota Chapter of the Alpha Tau Omega Fraternity. Throughout his life he continued involvement with the Wolf Pack and toward the culmination of his career, his alma mater honored him with the University of Nevada Distinguished Nevadan Award.

After graduating, Roland married Dixie and they moved to Germany for his two-year service in the Army. Upon return to his beloved Nevada, he and Dixie moved to Carson City. He worked for the US Bureau of Reclamation, the Nevada State Division of Water Resources and in 1967, at the age of 33, was appointed Nevada State Water Engineer. His career in public service continued when he was appointed Director of the Nevada State Department of Conservation and Natural Resources in 1979. During his tenure, he served under six Nevada governors. He retired in 1990 and continued his commitment to water resource management as a consultant. When he was named to the Colorado River Commission in 1996, the Las Vegas Sun reported that Nevada Governor Mike O’Callaghan once described Westergard as “the top water expert in the West.” During Roland’s career and into retirement, he served on the Western States Water Council, Interstate Council on Water Problems, Tahoe Regional Planning Agency, California-Nevada Interstate Compact Commission, Nevada State Environmental Commission, Nevada Society of Professional Engineers, Nevada Board of Professional Engineers and Land Surveyors, League to Save Lake Tahoe Board of Directors and the Advisory Board for the Tahoe-Baikal Institute.

Roland’s knowledge, integrity and commitment were honored with many awards, including Engineer of the Year from the Nevada Society of Professional Engineers. The Environmental and Natural Resources Section of the State Bar of Nevada presented Roland with its Lifetime Achievement Award. The Nevada Division of Environmental Protection Wendell McCurry Excellence in Water Quality Award recognized Roland’s nearly 50 years of water quality protection and water conservation, especially regarding Lake Tahoe and recognizing his key role in the Truckee River Operating Agreement (TROA).

As was his request, his immediate family held a private service in his honor.

Contributions may be made in the memory of Roland to the Dixie O. Westergard Memorial Endowed Scholarship Fund #175541 to the University of Nevada, Reno Foundation, Mail Stop 0162, Reno, NV 89557.