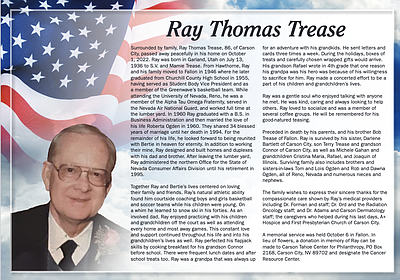 Surrounded by family, Ray Thomas Trease, 86, of Carson City, passed away peacefully in his home on October 1, 2022. Ray was born in Garland, Utah on July 13, 1936 to S.V. and Mamie Trease. From Hawthorne, Ray and his family moved to Fallon in 1946 where he later graduated from Churchill County High School in 1955, having served as Student Body Vice President and as a member of the Greenwave’s basketball team. While attending the University of Nevada, Reno, he was a member of the Alpha Tau Omega Fraternity, served in the Nevada Air National Guard, and worked full time at the lumber yard. In 1960 Ray graduated with a B.S. in
Business Administration and then married the love of his life Roberta Ogden in 1960. They shared 34 blessed years of marriage until her death in 1994. For the remainder of his life, he looked forward to being reunited with Bertie in heaven for eternity. In addition to working
their mine, Ray designed and built homes and duplexes with his dad and brother. After leaving the lumber yard, Ray administered the northern Office for the State of Nevada Consumer Affairs Division until his retirement in 1995.

Together Ray and Bertie’s lives centered on loving their family and friends. Ray’s natural athletic ability found him court side coaching boys and girls basketball and soccer teams while his children were young. On a whim he learned to snow ski in his forties. As an involved dad, Ray enjoyed practicing with his children and grandchildren off the court as well as attending every home and most away games. This constant love and support continued throughout his life and into his grandchildren’s lives as well. Ray perfected his flapjack
skills by cooking breakfast for his grandson Connor before school. There were frequent lunch dates and after school treats too. Ray was a grandpa that was always up for an adventure with his grandkids. He sent letters and cards three times a week. During the holidays, boxes of
treats and carefully chosen wrapped gifts would arrive. His grandson Rafael wrote in 4th grade that one reason his grandpa was his hero was because of his willingness to sacrifice for him. Ray made a concerted effort to be a part of his children and grandchildren’s lives.

Ray was a gentle soul who enjoyed talking with anyone he met. He was kind, caring and always looking to help others. Ray loved to socialize and was a member of several coffee groups. He will be remembered for his good-natured teasing.

Preceded in death by his parents, and his brother Bob Trease of Fallon. Ray is survived by his sister, Darlene Bartlett of Carson City, son Terry Trease and grandson Connor of Carson City, as well as Michele Gahan and grandchildren Cristina Maria, Rafael, and Joaquin of Illinois. Surviving family also includes brothers and sisters-in-laws Tom and Lois Ogden and Rob and Dawna Ogden, all of Reno, Nevada and numerous nieces and nephews.

The family wishes to express their sincere thanks for the compassionate care shown by Ray’s medical providers including Dr. Forman and staff; Dr. Ord and the Radiation Oncology staff; and Dr. Adams and Carson Dermatology staff; the caregivers who helped during his last days, A+ Hospice and First Presbyterian Church of Carson City.

A memorial service was held October 6 in Fallon. In lieu of flowers, a donation in memory of Ray can be made to Carson Tahoe Center for Philanthropy, PO Box 2168, Carson City, NV 89702 and designate the Cancer Resource Center.