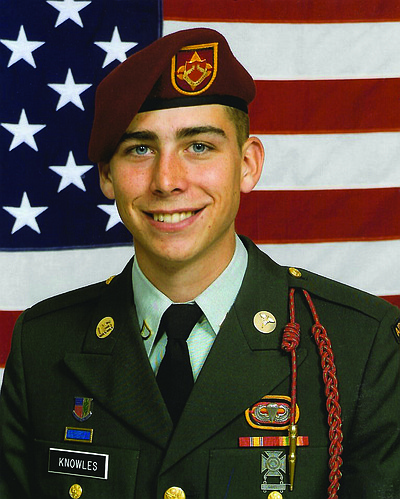 He graduated from Carson High School, Class of 2002 and studied at WNC. He then joined the U.S. Army shortly after graduating from high school. While in the Army, he became part of the 82nd Airborne Division. James served in Iraq during Iraqi Freedom and was awarded several commendations for his actions. His rank was Sp4/E4. After his enlistment, he joined the army reserve for a short period.

Jimmy had many hobbies including hunting, fishing, camping, darts and horseshoes among a few. He loved bonfires and was very social. He never met a stranger and was a friend to all.

He is survived by his father and mother, Richard D. and Donel Knowles of Carson City, NV., his brother Jason R. and T.J. Knowles of Dayton NV. Sisters Ashley Crozier, Carrie Crozier and Brother Chris Crozier of Ozark Mo. and Sister Victoria and her husband Justin Eltzroth of Carson City NV. Grandfather James E. Lynch of Dolores Co. Uncles Robert Knowles and wife Leah of Austin Tx., Michael and his wife Linda Lynch of Cortez Co. and Patrick Lynch and his wife Michelle of Co. Aunts, Peggy Bohn of Carson City NV., and Kristi Knowles and husband Adam of Bastrop Tx. He has several cousins including Josh Troupe of Dayton NV. and Ryan Budde of In.

A Private ceremony was held at Lone Mountain Cemetery followed by a Celebration of Life.